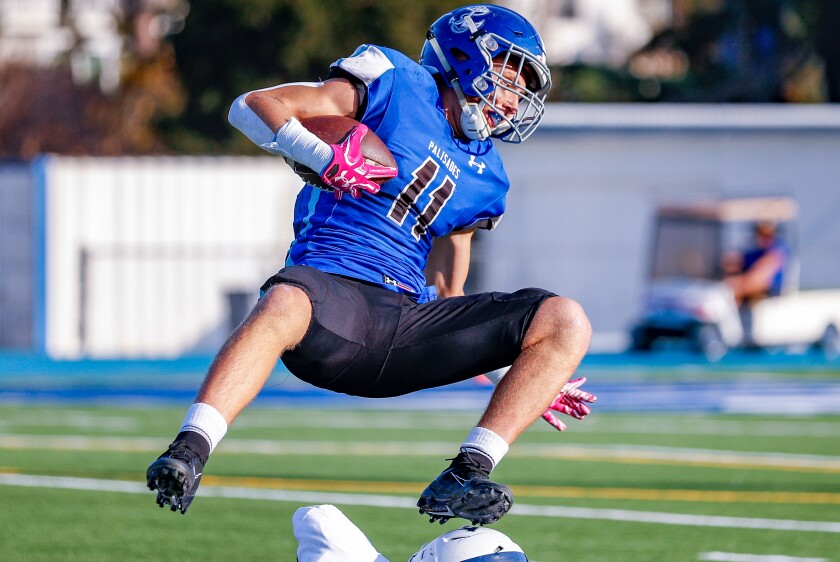 Linebacker Syaire Riley, 6 feet 1, 240 pounds, was running around the Palisades High football field on Monday afternoon with the singular focus of hitting Venice players no matter how many times they tried to avoid him. Twice in the first quarter, he tackled ballcarriers for losses. Then there was the pass he tipped that led to an interception by Immanuel Newell. He was a true disruptor.

“Outside of Narbonne [player], I think he’s the best defensive player in the City Section,” Palisades coach Tim Hyde said.

Palisades (6-1, 2-0) won its sixth consecutive game and took control of the Western League with a 38-14 victory over Venice. Running back Kenny Cline rushed for 131 yards and scored one touchdown. Running back Max Palees scored three touchdowns. Quarterback Forrest Brock passed 25 yards to Teddy Suisman for another touchdown. Near the game’s conclusion, Palisades players drenched Hyde with Gatorade.

“Venice is a rivalry game we take so much pride in,” Hyde said. “They’re the standard bearers we’re trying to become.”

The game was originally scheduled for Friday but had to be postponed because of air quality issues associated with the brush fire in the San Fernando Valley. Last year’s game was halted by lightning and forced to be continued the next day.

“Last year was lightning, this year smoke. Next year it could be an earthquake or snow,” Hyde said.

Venice (3-4, 1-1) could not provide protection for Duke-bound quarterback Luca Diamont, who passed for 171 yards but was intercepted twice and sacked three times.

“We’re ecstatic,” Riley said. “We wanted to make it very difficult for him to be comfortable.”