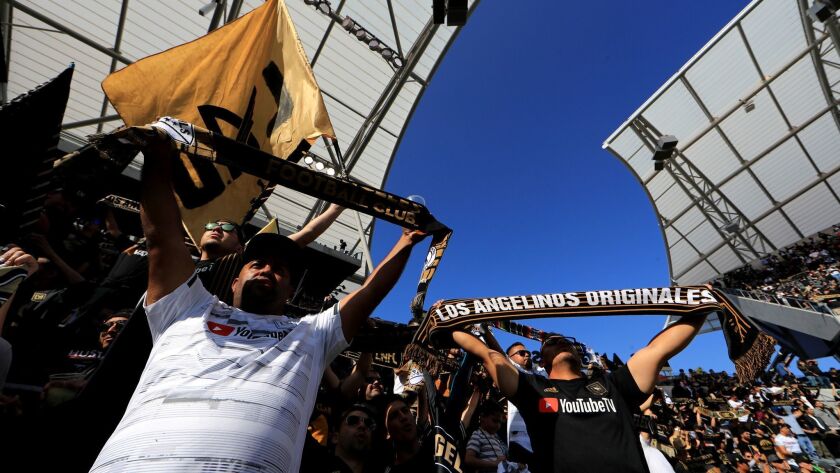 Major League Soccer is bringing its annual mid-summer all-star game to Los Angeles next season and for the first time the league’s top players will be matched against a team of all-stars from Mexico’s Liga MX.

The game is scheduled to be played July 29 at Banc of California Stadium in Exposition Park, the two-year-old home of LAFC. A formal announcement will be made at the stadium Wednesday morning during a press conference to be attended by MLS commissioner Don Garber and Enrique Bonilla, the executive president of Liga MX.

Next summer’s match will be just the second all-star game based in the Los Angeles area. The 2003 game was hosted by the Galaxy at the then-Home Depot Center in Carson. That was also the only other time a Mexican team was involved, with the MLS all-stars beating Chivas of Guadalajara 3-1 before a sellout crowd of 27,000.

The participation of Liga MX in next year’s all-star game comes as MLS tries to halt fading interest in the exhibition, which has been part of the league’s schedule since the inaugural season in 1996. It’s also the latest in a series of initiatives that has strengthened ties between the leagues.

MLS and Liga MX have long participated together in the CONCACAF Champions League, a tournament dominated by the Mexicans. But in 2018 that relationship expanded when the respective league winners met in the Campeones Cup while last season brought the first Leagues Cup, an eight-team cross-border tournament modeled after the North American SuperLiga, which drew little interest and folded in 2010 after four years.

The MLS all-star game has experimented with a number of formats over the years, including East vs. West and domestic players vs. international players. Since 2005 the MLS stars have played against a major European club team; last summer the MLS was beaten by Spain’s Atletico Madrid in Orlando.

But TV ratings have plummeted since 2017, when the MLS played reigning European champion Real Madrid at Chicago’s Soldier Field. That game drew a record 2.1 million viewers on FS1 and Univision. Compare that with this season’s match, which was hampered by a 40-minute weather delay and drew the smallest audience in the 24-year history of the game with just 182,000 watching the English-language broadcast on FS1.

However, 626,000 viewers tuned in to watch in Spanish on UniMas and TUDN and MLS is clearly hoping to continue that growth among Latino viewers by scheduling next summer’s game against a Mexican team.

Banc of California, at $350 million the most expensive soccer-specific stadium in MLS, opened in April 2018 on the site of the former Sports Arena. LAFC has sold out all 37 MLS games it has played at the 22,000-plus seat venue, including playoffs.