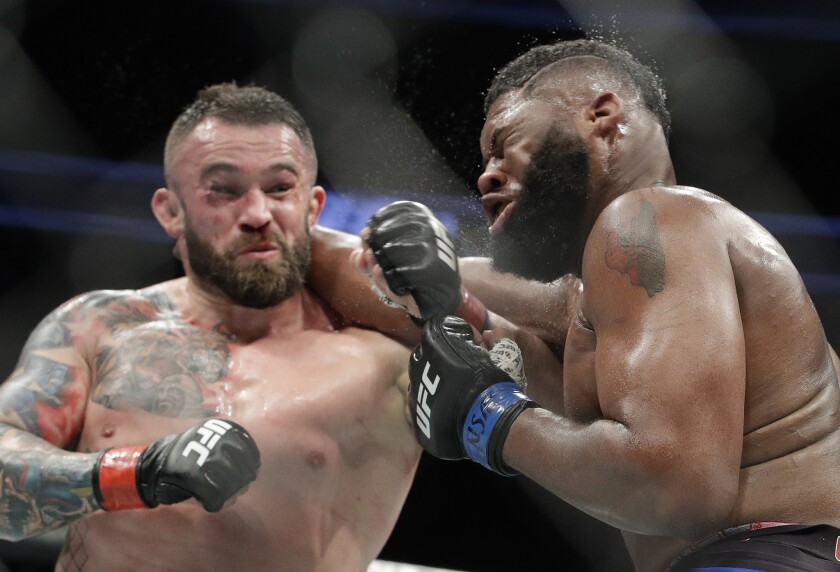 The Times’ MMA rankings for February, as compiled by Todd Martin:

Curtis Blaydes may be one of the most underappreciated fighters in the sport and he showed his ability again in victory over Junior Dos Santos. Blaydes caught the striker with punches in the second round and stopped the former UFC heavyweight champion. Blaydes has wins over many of the division’s best fighters.

Jon Jones will defend his UFC light-heavyweight title this weekend against unbeaten Dominick Reyes. Jones is the substantial favorite but Reyes enters into the fight with more momentum than any Jones opponent in quite some time.

With Paulo Costa unavailable due to injury, Israel Adesanya will defend his UFC middleweight title next against Yoel Romero. Romero has two straight losses but both were in competitive fights of the night. That plus the dearth of obvious contenders put the fight into discussion.

A few fighters knocking on the door of the top 10 picked up wins recently. Michael Chiesa was able to ground and control Rafael Dos Anjos to pick up an important win at 170. Meanwhile, a pair of Bellator stars scored wins at Saitama Super Arena as Michael “Venom” Page knocked out overmatched Shinsho Anzai and Lorenz Larkin scored a wide decision win over Keita Nakamura.

Conor McGregor made his triumphant return to MMA by quickly dispatching of Donald “Cowboy” Cerrone via first-round TKO. McGregor is ranked at lightweight because although he competed at welterweight, that was because McGregor had the pull to nix having to cut weight. He will be fighting lightweights and will cut to 155 pounds if fighting for the title. Cerrone falls out of the top 10 following his third straight stoppage loss and Diego Ferreira enters the list after beating former champion Anthony Pettis for his sixth straight UFC win.

Darrion Caldwell submitted Adam Borics to advance in the Bellator featherweight grand prix tournament. His opponent in the semifinals is the prodigy A.J. McKee in one of the most compelling Bellator bouts of the year. Caldwell will be an excellent test for where McKee stands in the division.

In one of the hardest matchmaking decisions to justify in quite some time, UFC is targeting Henry Cejudo’s next bantamweight title defense to be against Jose Aldo. Aldo lost his only bantamweight fight by decision and has lost four of his last six fights, while the division is fully stocked with ready contenders like Petr Yan, Cory Sandhagen and Aljamain Sterling.

Fights don’t get much more uneventful than Holly Holm vs. Raquel Pennington. Holm won their rematch by instigating clinches and accomplishing little else in the co-feature UFC 246. It’s hard to imagine Holm and Pennington will compete against each other a third time.

Roxanne Modafferi was a massive underdog against young star Maycee Barber but the good natured veteran utilized her ground game and benefitted from an injury Barber suffered during the fight to pull off the upset. Modafferi has been counted out before but she continues to compete against high caliber competition and picked up a big win against Barber.

The upcoming UFC strawweight title fight between Weili Zhang and Joanna Jedrzejczyk picked up some personal animosity in the last month. Jedrzejczyk in hyping the fight posted a photoshopped picture where she was wearing a gas mask, in reference to the coronavirus that has produced a grave health threat to Zhang’s home nation of China and the world. Zhang made it clear she did not appreciate the gesture in quick order.