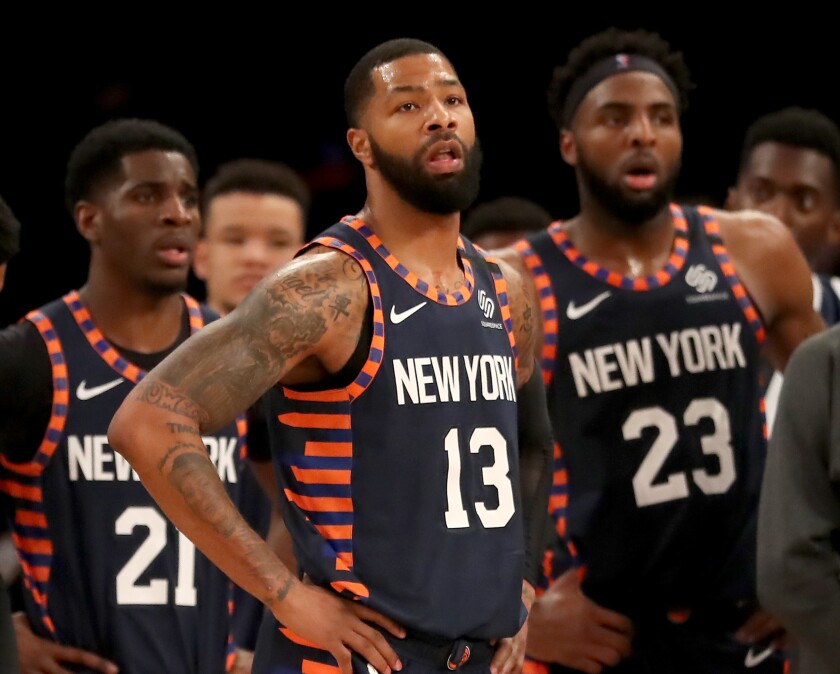 With the minutes to the NBA trade deadline ticking away, a key target for the Lakers and the Clippers came off the board, pushing Los Angeles’ two teams into a a showdown for New York forward Marcus Morris.

Andre Iguodala, who had been on the wish list for the Clippers and Lakers is headed to Miami, with the Memphis Grizzlies getting former first-round pick Justise Winslow in the deal. After the trade, Iguodala reportedly agreed to a two-year, $30-million extension with Miami.

The trade could expand to include Oklahoma City, with the Heat also trying to acquire former Clippers forward Danilo Gallinari.

The NBA’s trade deadline is Thursday at noon PST.

The Clippers and Lakers had been linked to the former Golden State Warriors wing since Iguodala was sent to Memphis before the season, with both teams in line for the championship-savvy player if he were to become a free agent. But the Grizzlies insisted they wouldn’t buy out the final year of Iguodala’s contract, and the 36-year-old never reported to the team.

With Iguodala off the board, Morris is now squarely in the sights of the Lakers and the Clippers.

Thanks to a front-office shakeup in New York, Morris is now expected to be dealt despite having a career season, scoring 19.6 points on 43.9% shooting from three-point range — where he’s taking more than six shots per game.

Morris, at 6-foot-8 and 235 pounds, is the kind of physical defender that can make an impact on the interior and perimeter.

For the Lakers, the cost would include Kyle Kuzma, whom the team has been gauging on the trade market over the last month.

Kuzma, just one of four players in the NBA to average at least 13 points while playing fewer than 26 minutes per game, doesn’t make enough money to be dealt for Morris straight up. To make a trade with the Knicks financially compatible, the Lakers would need to add more than $12 million in salary to the deal — the kind of thing that would either cost them starting guard Danny Green or multiple players eating into their depth.

The Clippers’ pathway to Morris appears more straightforward, though it’s not without its problems.

The team could acquire Morris for forward Maurice Harkless and any low-salaried player on their roster. The Clippers, unlike the Lakers, can also attach a first-round pick in the offer. However, according to people not authorized to speak publicly, the Knicks have been steadfast in wanting shooting guard Landry Shamet from the Clippers.

The Clippers are reluctant to trade Shamet, 22, whom they acquired last year at the trade deadline.

The team, according to people with knowledge of the situation, has received calls on centers Ivica Zubac and Montrezl Harrell, whose contract expires at the end of the season.

To this point, the Clippers appear to be content if they’re unable to make any major move at the deadline. People in the organization point to the handful of games the team has had at full strength. They’ve insisted that the small sample size won’t force them into any panic-driven trades.

Prior to Wednesday’s game with Miami, Clippers coach Doc Rivers said he thought the team would stand pat.

“I got a feeling [the roster] will be the same but you just never know,” he said.

In addition to Morris, the Lakers have also been talking to teams around the league about backcourt help.

According to one person with knowledge of their talks, the Lakers called Brooklyn about point guard Spencer Dinwiddie, though the talks were never serious. The Lakers also spoke to Oklahoma City about guard Dennis Schroder.

It’s less clear what Plan B looks like for the Clippers.

The Clippers are hoping to add shooting, which would make combo forwards like Orlando’s Aaron Gordon (30.1% on three-pointers) less than ideal.

If the Clippers don’t get involved in a trade that provides them with an upgrade, it wouldn’t be surprising to see them involved in a minor deal or two in an effort to open roster space and possibly add a draft pick to their depleted cache.

Other teams that rival scouts and executives expect to be active before the trade deadline include the Detroit Pistons and the Phoenix Suns.

The Pistons have point guard Derrick Rose, who could be the type of bench scorer the Lakers and other contenders could use.

The Suns are listening to offers for 24-year-old Kelly Oubre Jr., who is averaging 18.5 points and 6.7 rebounds in his fifth season.

Sacramento could also continue to be active after sending center Dewayne Dedmon to Atlanta for center Alex Len and forward Jabari Parker on Wednesday.

It’s not clear to scouts and executives how aggressive teams will be before Thursday’s deadline. The crowd at the bottom of the Western Conference playoff race has muddied some decisions. Indications also point to New Orleans standing pat with star guard Jrue Holiday.

After missing on Iguodala and battling for Morris at the trade deadline, the Clippers and Lakers should be in the center of competition for free-agent guard Darren Collison, who is expected to make an announcement about a possible comeback after the All-Star break, and for other veteran players who get bought out of their contracts and become free agents.