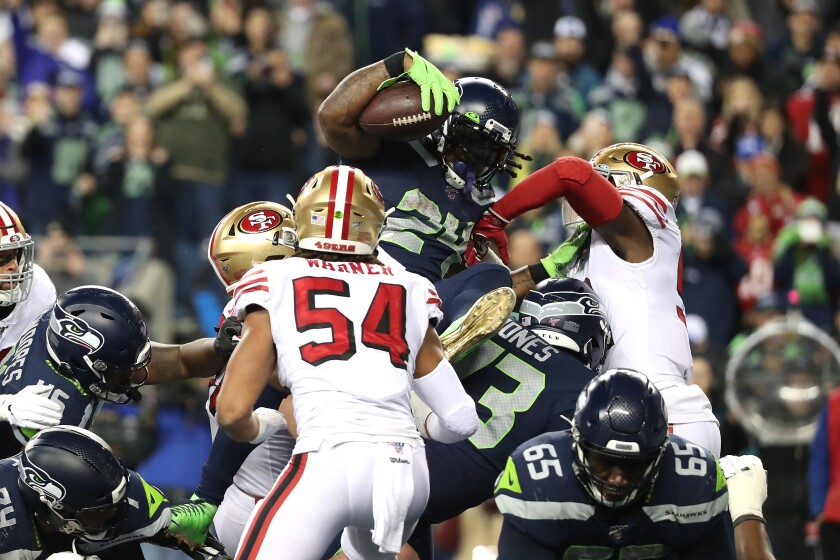 Marshawn Lynch scores a touchdown in his return to Seahawks

It’s been more than a year since Marshawn Lynch played in an NFL game, but he showed Sunday he can still make an impact. Lynch rushed for 34 yards on 12 carries and scored a touchdown during the Seattle Seahawks’ narrow 26-21 loss to the San Francisco 49ers.

His touchdown came on a one-yard plunge that evoked plenty of reactions from armchair quarterbacks on social media about what coach Pete Carroll should have done in the final seconds of Super Bowl XLIX.

It wasn’t all touchdowns and Skittles for Lynch, though. Earlier in the game, he got stuffed by 49ers defensive end Nick Bosa on fourth and inches.

Although Lynch’s impact was limited, the return of “Beast Mode” to CenturyLink Field was a positive development for the Seahawks even if they missed their chance to win the NFC West by mere millimeters.

The Seahawks further got the band back together by signing Robert Turbin, who once backed Lynch up in Seattle.

Over six seasons in Seattle, Lynch had 6,347 yards rushing and 57 touchdowns during the regular season. He also had 937 yards rushing with nine touchdowns over 11 playoff games, which included a Super Bowl victory (2013).

If he’d had one more carry for a single yard, he might have delivered the Seahawks their second consecutive Super Bowl title, but we digress.

Lynch’s career began as the No. 12 overall pick by the Buffalo Bills in the 2007 NFL Draft out of California.

He spent three full seasons in Buffalo before he was traded to the Seahawks during the 2010 season.

Lynch later played two seasons with his hometown team, the Oakland Raiders, with his last NFL carry prior to Sunday coming in a Raiders loss to the Seahawks on Oct. 14, 2018.