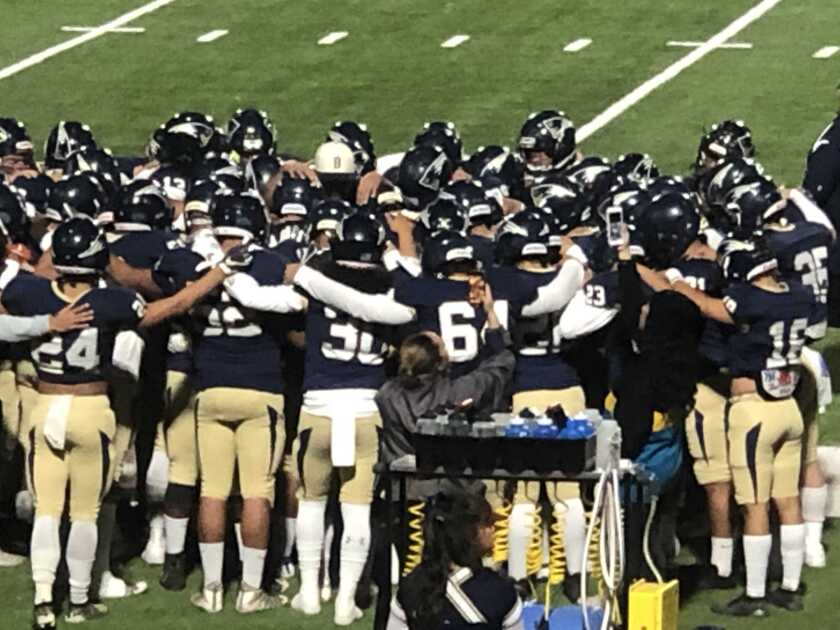 Time flies by so fast. Mason White of Lake Balboa Birmingham was reminiscing how three years ago he was 13 and too young to play in a playoff game. On Friday night, the senior said: “This is playoff time. This could be my last game. I wanted to give it my all.”

It was vintage White against Garfield in the City Section Open Division playoffs. White caught two touchdown passes, deflected a field-goal attempt, blocked a punt and made an interception in the Patriots’ 34-14 victory.

“There’s nothing much to say other than that’s Mason,” defensive end Arlis Boardingham said.

Added Garfield coach Lorenzo Hernandez, “We knew he was a threat, and we were still unable to contain the things he was doing.”

Birmingham coach Jim Rose has been engaging in a little “load management” strategy with White. He didn’t play him in a game against Taft near the end of the regular season. But now he has been turned loose. On a 51-yard touchdown reception, White shed two tackles, then hurdled a player on the ground while running into the end zone.

“All week I was thinking I wanted to jump over someone in high school,” White said. “I just hopped over him.”

He had 11 blocked kicks or punts over the last two seasons and has more than 15 in his varsity career. He blocked a punt in the fourth quarter to set up a four-yard touchdown run by Marcus Arthur with 6:56 left for a 27-14 lead. Then his interception set up another Arthur touchdown run.

“He was all over the place,” Rose said. “He’s only going to get better. I can’t wait to see what he looks like his junior year in college.”

Birmingham quarterback Jackson Dadich completed 12 of 23 passes for 239 yards and three touchdowns. PJ Garcia of Garfield rushed for 156 yards in 31 carries and scored one touchdown.

The City Section hasn’t had an upper division champion not named Narbonne since the 2013 season. When Narbonne was banned from this year’s playoffs after multiple ineligible players were discovered by the Los Angeles Unified School District, it created an evenly matched eight-team tournament.

Rose remembers losing to Narbonne last season in the playoffs.

“We played a real good game and lost by 40 points,” he said. “In this bracket, anybody can beat anybody, which is how you want it.”

Birmingham advances to play at No. 1-seeded San Pedro, which defeated Carson 17-0. Crenshaw, behind running back Jalen Poinson, upset No. 2-seeded San Fernando 26-23. Banning defeated Palisades 35-21 and will host Crenshaw in the semifinals.

Birmingham took a 14-0 lead in the first quarter on touchdown passes of 10 yards to White and 69 yards to Gonzalo Robledo, who did a forward flip in the end zone. Garfield got back into the game on a seven-yard touchdown run by Garcia with 3:16 left in the half.

Gonzalo Robledo got a little too excited at end of his 69-yard TD. But it’s Birmingham 14, Garfield 0. pic.twitter.com/zOsy0N9ULC

But Birmingham’s defense twice stopped Garfield on fourth down in the second half.