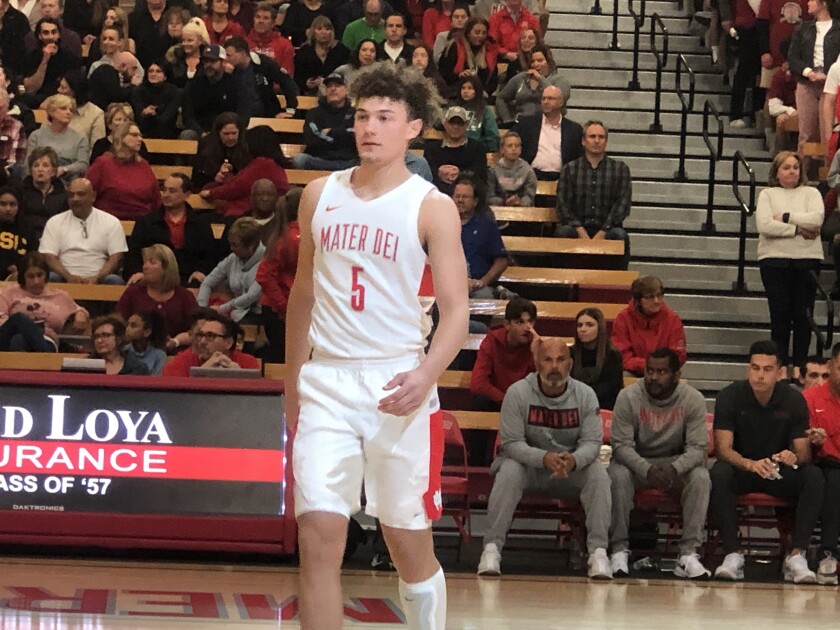 Kentucky-bound Devin Askew of Santa Ana Mater Dei had missed 10 his 14 shots. His team was tied with Bellflower St. John Bosco with 5:23 left in a game that would practically decide the Trinity League championship. He put up a three-point shot from the left wing that was so off he let loose a frown after the ball banked in.

Askew made four consecutive shots in the fourth quarter to ignite a 9-0 run that sent the Monarchs to a 60-54 victory Tuesday night, giving McKnight no worse than a tie for his 37th league championship in 38 seasons.

Mater Dei has been in the Southern Section Open Division playoffs every year since since the division was created in 2014, the last year of former Monarch great Stanley Johnson. A loss and Mater Dei might have been left out this season.

The Monarchs have struggled at times while rarely being at full strength in recent weeks because of illness. Breidenbach was coming back after suffering from a virus that caused him to lose weight. Others on the team were also sick.

“So many people have been absent from school,” Breidenbach said.

Halftime it’s all tied up at Mater Dei. pic.twitter.com/CFei7eUt0p

Mater Dei started the season ranked No. 2 behind Chatsworth Sierra Canyon because of five returning starters, but other teams have caught up to the Monarchs.

Breidenbach said it has been a roller coaster season for the Monarchs.

“Every team goes through a slump,” he said. “You have to enjoy the highs and power through the lows.”

Askew certainly powered through his shooting issues Tuesday, but when it came to making his H-O-R-S-E bank shot, everything changed.

St. John Bosco is still in good position to make the Open Division playoffs if it can defeat Santa Margarita on the road Thursday.

“The difference was rebounding,” he said. “That’s what we’ve done best this season and didn’t tonight.”

But nothing is set, because Los Angeles Ribet Academy plays Rancho Christian on Saturday at Cerritos College. A Ribet win could add some uncertainty. And Harvard-Westlake must win the Mission League tournament. The Wolverines play Mission Hills Bishop Alemany on Wednesday at Crespi in the semifinals.