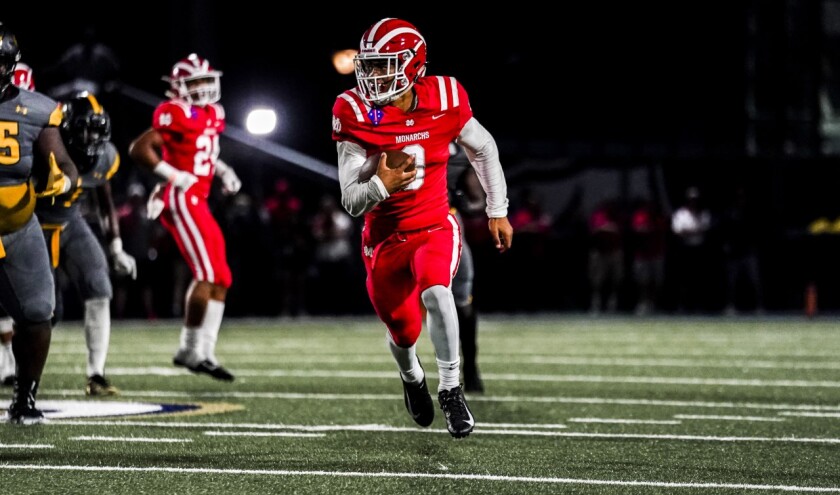 The matchup between Bellflower St. John Bosco and Santa Ana Mater Dei on Friday night has been circled on calendars for months, but not just by the players and coaches. Tickets to the game sold out in less than 24 hours.

There have been more than 30 media requests and that number continues to rise. Jessica Christensen, who handles credentialing for St. John Bosco, expects it to be the most requests she will receive this season. There also should be a strong contingent of college coaches roaming the sideline. Everyone wants to catch a glimpse of the ridiculous amount of talent on the rosters.

For talent evaluators, this is as good as it gets. There are 11 top-100 prospects, per the 247Sports composite rankings for the 2020-22 classes, expected to play Friday. There are 51 players who have at least one Division I scholarship offer.

“It will be the most important game I cover all year,” Rivals national recruiting analyst Adam Gorney said. “There is no better evaluation opportunity than seeing arguably the two best high school teams in the country play each other. This isn’t seven-on-seven or a camp setting. Both of those are valuable. But we will get to see both of these teams with a lot on the line and everybody raring to go.”

This isn’t just a game to decide first place in the Trinity League. It’s a chance for players to potentially move up recruiting boards, both with specific colleges and in the overall recruiting rankings.

“When you have elite on elite and when you see these guys going head to head and they stand out in that kind of setting, it definitely can up their stock and kind of shows you just how good they are,” said 247Sports national recruiting analyst Greg Biggins, who will be in the booth as part of the FS West broadcast team.

“These are the two best teams in the country. It’s unprecedented that they’re from the same league. If you’re talking pure high school teams, there’s nothing like this rivalry at all; nothing close.”

Here’s a look at some of the top matchups talent evaluators will be watching:

Even though they won’t be going against one another on the field, everyone wants to see who gets the better of the battle between the top two quarterbacks in the nation. Biggins said it’s the first time in the history of recruiting rankings that the No. 1 and No. 2 senior quarterbacks have played each other.

St. John Bosco’s Uiagalelei has the prototypical quarterback frame at 6 feet 4½ and 246 pounds and can make any throw. Young measures 5-11 and 183 pounds but has uncanny anticipation both on his throws and when eluding defenders.

Pepe, a USC commit, has been perhaps the most disruptive interior lineman in the Southland with 54 tackles and eight sacks. Miki-Han had a strong showing on the spring showcase circuit and is the glue in the middle of the Mater Dei offensive line. Shutting down Pepe will be a tough task but definitely would boost his stock.

The most intriguing one-on-one matchups will be between the receivers and secondary. Both teams can trot out four really-hard-to-defend receivers on any snap and both have two or three elite cornerbacks. Each matchup should be great regardless of how the defenses choose to align.

Ideally, it’s Davies-Hutson and Jackson-Collins dueling when St. John Bosco has the ball, so it’s speed and quickness in one matchup and strength and physicality in another. Jackson (No. 10 in the 2022 class) against Collins (No. 30 in 2021) would be the highest-ranked one-on-one matchup of the night.

Mater Dei’s offensive tackle duo of Murao and Marks has taken on defensive ends and outside linebackers committed to Alabama, Georgia, Louisiana State, Purdue and Michigan this season. They also faced the No. 1 player in the junior class in Corona Centennial’s Korey Foreman. Murao and Marks have more than held their own, being outside anchors for the Monarchs. Murao is one of the top offensive linemen in the West Coast, so if Jordan or Burrell has a strong showing, it could really enhance his standing.