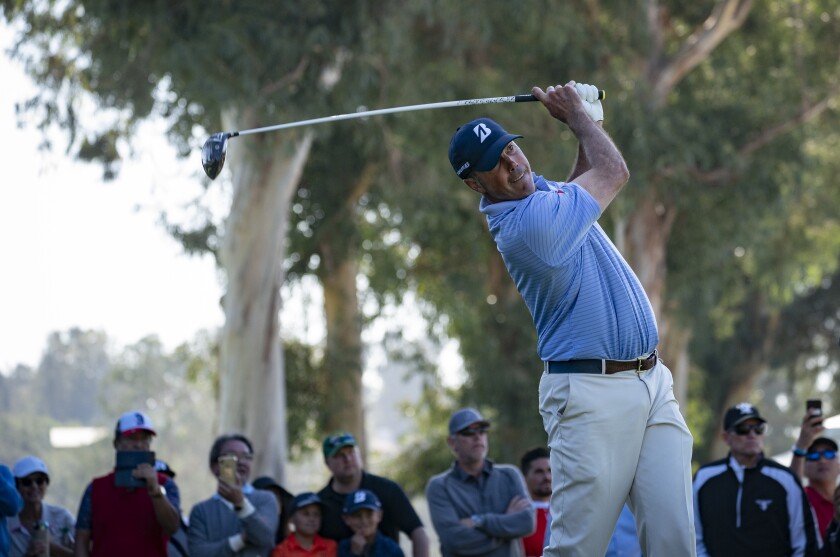 Matt Kuchar awoke Friday morning with a comfortable three-shot lead heading into the second round of the Genesis Invitational at Riviera Country Club.

By the time he teed off just after noon, several players had worked their way up the leaderboard behind him and eaten into that lead. And after Kuchar’s first nightmarish 15 minutes on the course, the lead had been devoured and he suddenly found himself tied with five players.

But there’s a reason Kuchar has won nine times in his 19 years on the PGA Tour. He regrouped from his early pitfall to shoot a two-under-par 69 and, at nine-under 133, holds a two-shot lead over world No. 1 Rory McIlroy, who shot a 67, Harold Varner III (68) and Wyndham Clark (68).

Adam Scott, who shot the day’s lowest round at 64, Vaughn Taylor (67), Sung Kang (67) and Russell Henley (69) are at six under. Nineteen players are within five shots of the lead.

Kuchar opened the door right away for his pursuers. No. 1 at Riviera is one of the shortest par fives on the tour, at 508 yards Friday, and last year played as the easiest on the tour. It’s shorter than many par fours the pros play. Birdies generally outnumber pars by at least two to one.

After driving into the rough, Kuchar missed the green to the left and long on his second shot, failed to get his third shot to the putting surface and couldn’t get up and down from there. There were six eagles and 75 birdies on that hole Friday and only two bogeys. One was Kuchar’s.

“You certainly go into the day planning on making birdie there,” Kuchar said. “And making bogey there was a tough way to start. You feel like you’ve already given up two shots.”

“To hit it the way I hit it, to shoot two under par is an awfully good score,” Kuchar said, “particularly bogeying the first hole.”

McIlroy, like every other player within four shots of Kuchar, birdied No. 1.

“Most of the day I did the things that I needed to do,” McIlroy said. “I birdied the par fives and I didn’t put myself in any real trouble off the tee. ... I’m managing my game well. ... That’s what this place is all about.”

Varner set a tour record for a tournament this month at the Waste Management Open when he made 32 consecutive pars, all 18 holes in his opening round and the first 14 in his second round on the way to a pair of 71s. The consistency wasn’t enough though. He missed the cut by one. He has failed to make the weekend in any of his four previous events in 2020, though, as is his custom, he isn’t fretting about it.

“I haven’t really been struggling,” he said. “It’s not like I missed the cut by like 20 shots. You keep trying, keep attempting, keep believing in yourself. I would hope that everyone in their life was doing the same thing.”

Varner, one of four African American players currently on tour, was given the Charlie Sifford exemption into the Riviera field in 2014 and has made the cut in three of his five appearances. In last year’s PGA Championship, he was tied for second and played in the final group on Sunday before skyrocketing to an 81 and finishing tied for 36th.

Varner, looking for his first win in his fifth season on tour, tries to remain upbeat whatever his situation, but that 81 was difficult for a while.

“I just hated playing bad in the biggest situation I had ever been in,” the stocky, 5-foot-8 29-year-old said. “So if you hate doing something like that, you just work harder and you just keep figuring out how to do better the next time. ... You just keep trusting what you’re doing. You’ve almost got to be crazy.”

Scott, who won the tournament in 2005 when it was a rain-shortened 36 holes and has three top 10s at Riviera since, put together the best round of the day, a bogey-free 64 in which he birdied four of his last five holes.

A guy who likes to take time off at the end of the year and return home to Australia, he is making his first start since playing in the Presidents Cup in December.

“Yeah, I like to starve myself a little bit of competition and make sure that I’m ready to come back out,” he said.

“I think I started getting the feeling like I should start playing around Torrey Pines, once I saw that on television. ... So that was good to get those feelings, so I knew I would be definitely ready for here.”