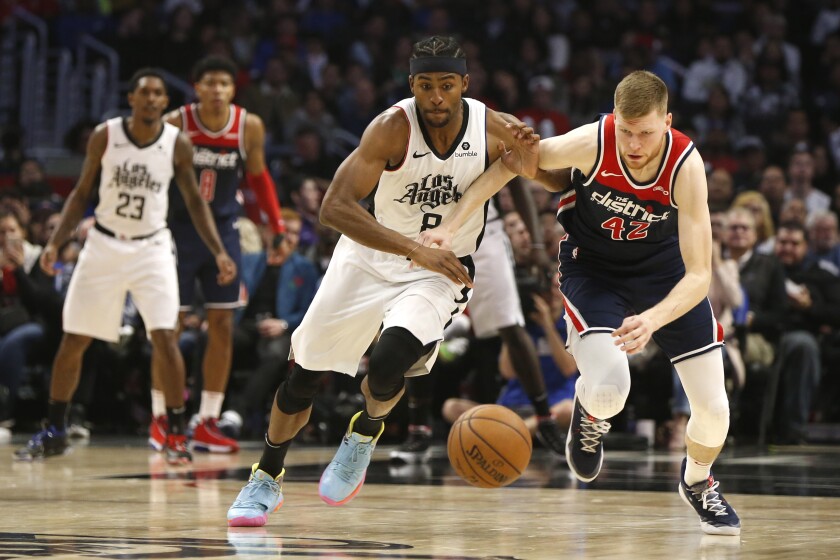 Maurice Harkless was a skinny 19-year-old rookie in 2013, one of the youngest players in the NBA, when then Magic coach Jacque Vaughn gave him the news. That night, he’d be guarding his favorite player, Carmelo Anthony, who was starring for the New York Knicks, his favorite team.

It was one of the toughest assignments in the NBA at the time — a player with the body of a power forward and the footwork of a shooting guard, someone who could thrive in the post or on the perimeter.

“It was tough — but I had fun with it,” Harkless remembered. “… You have to be out there so you can try things.”

More than six seasons later, Harkless is almost always out there, on the other side of the NBA’s best offensive players, trying to get a stop.

It’s what has made him such a valuable piece to the Clippers after arriving this summer in a three-way trade with the Miami Heat and Portland Trail Blazers — he’s a defensive “Swiss Army Knife,” as Doc Rivers has called him. He’s a likable guy with a good sense of humor who organized an outing to a Rams game for his new teammates earlier this season.

He’s a good fit with the team.

That’s what could make his situation so complicated. As the NBA moves closer toward the Feb. 6 trade deadline, Harkless becomes less about what he does on the court and more about what he means on the salary cap ledger.

Harkless is in the final year of a contract that will pay him more than $11 million this season, a significant figure if the Clippers decide to make a deal to upgrade their roster. For a trade to work, the numbers have to essentially match, and Harkless’ cap number would be a crucial piece in any deal.

While the Clippers’ trade intentions are still too soon to be known, they are sniffing around. NBA sources not authorized to speak publicly believe the Clippers are looking at players like Chicago power forward Thaddeus Young.

With Young in the first year of a deal that pays him nearly $13 million per season, it’s not too hard to guess who the Clippers would likely need to include in any deal to acquire him.

“I just focus on what I’ve got going on here. That’s the only thing I can control,” Harkless said. “If I let myself worry about that stuff. ... Man, I’ve been in the league long enough where I know how it goes. If it comes to that day, I’ll deal with it when I get there.”

Rival executives believe the Clippers could be on the hunt for another physical center — a potential finals matchup with Milwaukee or Philadelphia would demand more size — or another playmaking guard. The costs for either via trade — especially if it’s a high-impact player — would require the Clippers to cobble together matching salaries to make a deal work, with Harkless’ contract the easiest place to start.

The issue is that the Clippers have no reason to trade Harkless.

He’s been found money, a player the Clippers acquired for nothing this summer just by being in the right place at the right time.

That excitement Harkless had guarding Anthony years ago? It’s still there. He’s got the perfect combination of size and agility that makes him a credible choice to defend point guards, wings and power forwards. When the Clippers played Portland in the 2016 playoffs, Trail Blazers coach Terry Stotts used Harkless to guard Chris Paul for important stretches.

The day before a game, Harkless will start breaking down film on the top three players he’ll likely defend, studying for tendencies and tells in key moments. With the scouting, Harkless will tap into his experience, the tricks he’s developed and the instincts he’s honed to take on players such as James Harden, Giannis Antetokounmpo and LeBron James.

He’ll do it with reasonable expectations of success.

“As long as it’s not easy for him — that’s the thing people get confused. Guys are too talented in this league. You’re not going to hold LeBron James to zero points if he’s being aggressive,” Harkless said. “But you just have to make it tough on him. If he gets 30? Make those 30 hard on him.”

His willingness and competence have allowed the Clippers to not need to rely on the defense of Paul George and Kawhi Leonard on a nightly basis, allowing those players to spend a little more energy on the offensive end while Harkless takes on the toughest assignments.

If he continues to do what he’s done for the last few seasons — and what he’s done in his first few months with the Clippers — it will certainly make things tough. His contract is one of the team’s most tradeable, a perfect piece in any deal that could improve the team. Any deal that sends out Harkless might hurt the Clippers in some other ways.

It’s a problem the Clippers front office will have to tackle — an unavoidable situation to confront as it makes its biggest in-season decisions.