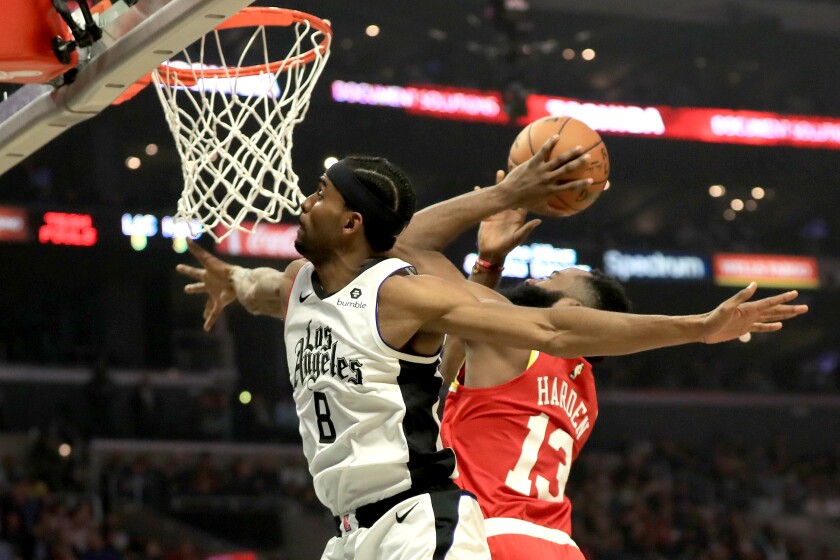 His name is Maurice Harkless and he’s the unheralded man on the Clippers, obviously never mentioned in the same vein as Kawhi Leonard and Paul George, or even Patrick Beverley, Lou Williams and Montrezl Harrell.

But the Clippers are well aware of who Harkless is and how his defensive presence is never forgotten as perhaps the most overworked player on the team.

On a team with versatile defenders, the 6-7 Harkless has proved to be equal to the task, showing his ability to defend players such as Houston’s lethal backcourt of James Harden and Russell Westbrook, which was part of his chore Friday night at Staples Center.

The Clippers have discovered that Harkless has the chops to defend point and shooting guards, small and power forwards.

That ability to switch on to basically any player is what has made Harkless a key cog in the Clippers’ defensive scheme.

“What I didn’t realize — actually, I think I was a little wrong on him. I’ve always thought, I thought he was gonna be a defender on the bigs, like the fours and the threes, and he’s done a good job there,” Clippers coach Doc Rivers said. “But what’s surprised me is his ability to guard ones and twos. He told us that. I didn’t believe that, I’m just being honest, ‘You know, I can guard smalls even better.’ And he told us that early in camp and, I probably had an eye roll like, OK, and he’s proven he was right.”

Harkless got a taste of defending Harden and Westbrook, doing his part to try to slow down the dynamic pair.

There was the moment in the third quarter when Harkless fouled Harden while he was shooting and making a three-pointer. Harden made the free throw for a four-point play.

But there also was the moment in the first quarter when Harkless forced Westbrook into a turnover the first time he touched the ball.

Harkless guarded the 6-foot-1 Walker for nearly 20 possessions and the Celtics scored 27 points in that span. And yet the All-Star guard himself accounted for only three of those points, and got off only three field-goal attempts, while turning the ball over three times, according to NBA player-tracking data.

Rivers said Beverley was one of the heroes of the Clippers’ win over Boston, “but I thought Moe Harkless was the silent one.

“We just told him to guard Kemba. I don’t think he was a fan of the decision, I’ll say that, when we told him who he was guarding, but he went out and did it and did just an incredible job.

“So, when you have that size, you have the ability to put that type of size on guards, it gives us a great dimension.”