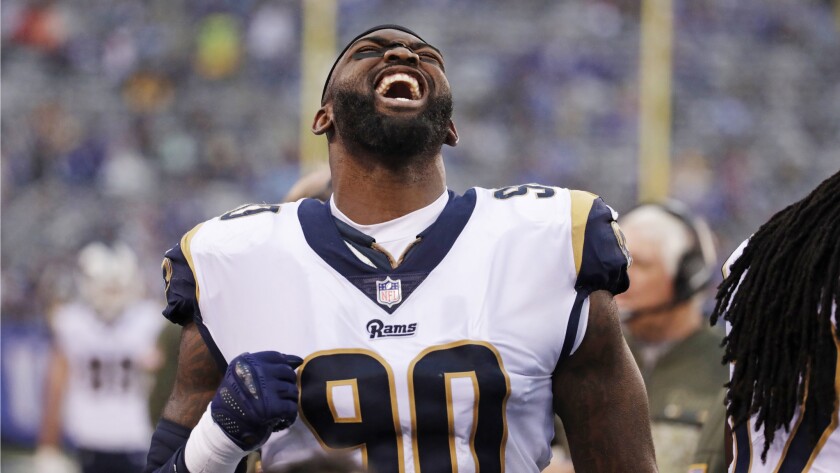 Michael Brockers thanks the Rams, but is this the final goodbye?

It was a thank you note to the Rams and fans, but was it a final goodbye to the team?

Rams defensive tackle Michael Brockers, with wife Faith by his side, appeared in a video posted to Uninterrupted’s Twitter and Instagram accounnts Friday in which Brockers read a letter to fans.

Brockers, 29, is a pending free agent after playing eight seasons with the Rams.

He thanked owner Stan Kroenke, general manager Les Snead and the organization for giving him an opportunity.

“No matter what happens next, I was honored to be a Ram, honored to be a part of this organization and honored to put those horns on,” he said. “Me and my family can’t wait to see what’s next and we just want to say thank you.”

Dear @RamsNFL Nation, No matter what happens next, I was honored to be a Ram. Honored to be a part of this organization, and honored to put those horns on. #SincerelyYours, @michaelbrockers pic.twitter.com/KB6kAjsS8M

Brockers played in college at Louisiana State and was the 14th pick in the 2012 draft. He excelled for the Rams as line-clogging interior lineman and also had 23 sacks. He had a career-best 63 tackles and three sacks this season for a Rams team that finished 9-7 and missed the playoffs for the first time in coach Sean McVay’s three seasons.

Brockers suffered a left ankle injury that forced him to leave the season finale against the Arizona Cardinals, but McVay said Brockers would not require surgery.

Brockers carried a salary-cap number of nearly $10.8 million this season in the final year of a three-year, $33.25-million extension.

Brockers likely will be a salary-cap casualty for a Rams team that in the last 19 months signed wide receiver Brandin Cooks, running back Todd Gurley, defensive lineman Aaron Donald and quarterback Jared Goff to massive extensions. Cornerback Jalen Ramsey, acquired in a midseason trade, also is in line for a huge extension.

Linebacker Cory Littleton also is a pending free agent, and receiver Cooper Kupp and safety John Johnson are entering the final season of their rookie contracts.

Brockers reflected on his career, which began with a phone call from former coach Jeff Fisher on draft night and included a playoff appearance in 2017 and a Super Bowl berth in 2018 under McVay.

“We brought Showtime back to L.A.,” he said.

Late this season, Brockers acknowledged his future was unknown.

“I know it’s a business. I understand teams — sometimes they love a guy but they still have to let him go,” he said before the Rams played the Dallas Cowboys. “That could be the situation.

“Hopefully it’s not. But I’ve been in this business long enough to understand that some tough choices have to be made.”