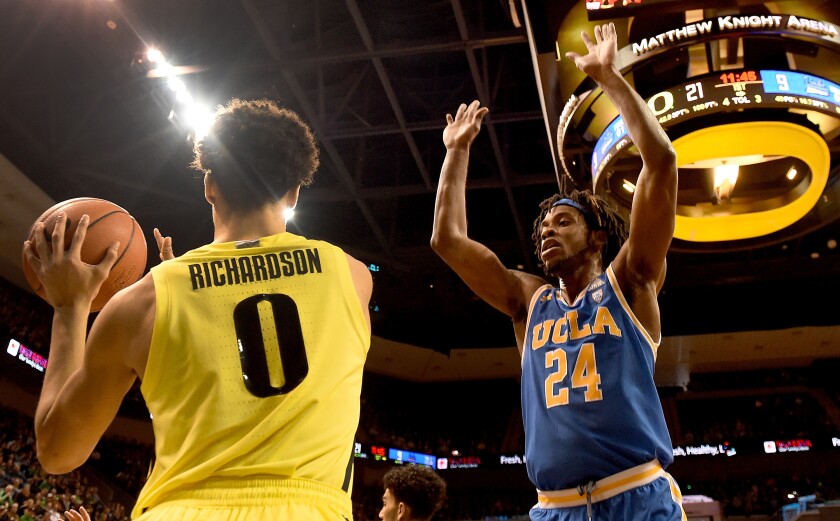 This was the same player whose forays around the basket earlier this season usually resulted in him either traveling, picking up a charging foul or getting his shot blocked.

In the final minutes Thursday night, with his team desperately needing offense in overtime, UCLA’s Cody Riley was unstoppable.

He powered in for one layup. He deftly maneuvered around a defender for another. He grabbed an offensive rebound and there was no doubt he was going to go up strong for a putback.

Riley’s 11 points in the extra period delivered a slog of a victory for the Bruins over Washington State and produced the latest evidence of his coaching staff’s proficiency in player development.

Sophomore guard Jules Bernard, once a wild card prone to out-of-control play, has become an elite defender who has shown increasing restraint.

Redshirt freshman guard Tyger Campbell, once so unselfish that he almost refused to shoot, has unleashed a mid-range game that’s become a staple of the offense.

Redshirt sophomore Jalen Hill, once reluctant to run back on defense, has become a constant blur of activity.

Junior guard Chris Smith, once susceptible to lulls that lasted weeks, has shown more consistency while becoming a go-to scorer.

“I think we’ve grown up a lot,” UCLA coach Mick Cronin said after his team completed an 86-83 victory over Washington State. “The reality for our guys is, none of them have ever been in a position where they had to play well or UCLA wasn’t going to win and now all the guys who play are in that position. So now it’s a responsibility to be an every-play guy.”

The collective improvement has resulted in a late-season renaissance for the Bruins, who have gone from losing to Cal State Fullerton on the eve of Pac-12 Conference play to winning six of their last eight games, including two victories over nationally ranked teams.

UCLA (14-11 overall, 7-5 Pac-12) sits one game behind conference co-leaders Oregon and Colorado heading into a game against last-place Washington (12-13, 2-10) on Saturday night at Pauley Pavilion. Currently tied with USC for fifth place, the Bruins are just half a game out of fourth place, which would give them a first-round bye in the Pac-12 Conference tournament.

Riley is the latest Bruin to barely resemble the player he was last season, or even last month, which is exactly the idea for a team seeking drastic improvement. The redshirt sophomore forward lost his starting spot in January amid Hill’s emergence and his team’s move to primarily a four-guard lineup but continued to play a valuable role as the first big man off the bench.

Riley scored 16 points last week in a spot start for an injured Hill and came up big again Thursday with Hill struggling for much of the game. Riley finished with 19 points, four rebounds and one block in 21 minutes, wowing the team that could not stop him in overtime.

“He was a guy that, his whole life he scored because of his size,” Cronin said of the 6-foot-9 Riley. “Now he’s got to score with technique and fakes and balance, so he did a great job of getting his second foot planted, which gave him strength around the rim. The way he was doing it, you could see he was on a mission.”

Up next for UCLA: Saturday vs. Washington

Update: Washington has lost seven consecutive games to fall below .500 for the first time this season and is coming off a 38-point swing against USC, losing to the Trojans by six points on Thursday after beating them by 32 when the teams met last month in Seattle. The Huskies have foundered since sophomore guard Quade Green was ruled academically ineligible two games into Pac-12 play.