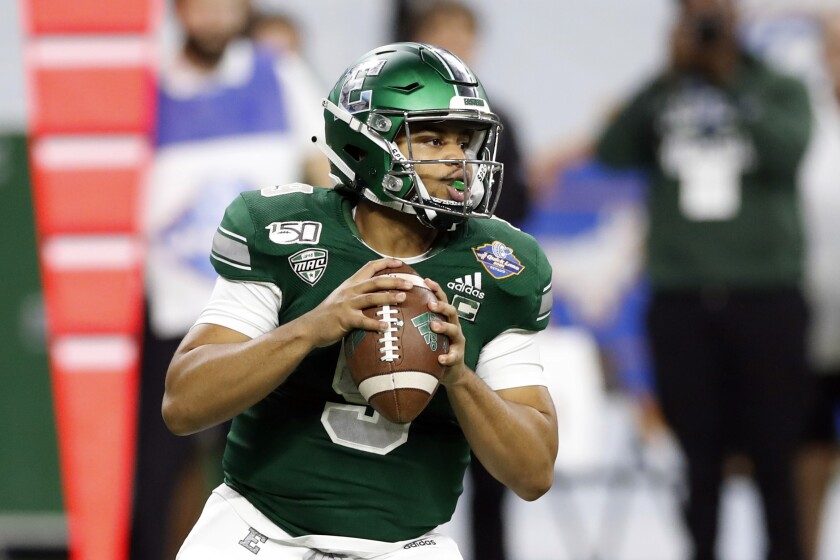 Mike Glass threw punches during the Quick Lane Bowl, but did he really hit a referee?

Eastern Michigan quarterback Mike Glass has gotten a lot of attention after his team’s 34-30 loss to Pittsburgh in the Quick Lane Bowl on Thursday.

But it has nothing to do with his three touchdowns (two through the air, one on the ground) or that he broke school records for total offense and touchdown passes during the game.

Instead, Glass is known to many as the guy who got ejected from a bowl game with 10 seconds remaining after punching two opposing players and at least appearing to knock down an official.

Glass was trying to rally his team after Pitt had taken the lead with 47 seconds remaining in the fourth quarter. But after an incomplete pass on third-and-10, this happened:

Eastern Michigan QB Mike Glass III was ejected after throwing punches during the final seconds of their bowl loss to Pitt. pic.twitter.com/DTPguFRtnj

Glass was approached by Pittsburgh linebacker Cam Bright as he pulled himself off the ground after the play. Not sure what kind of interaction the two of them had, but it ended with Glass punching Bright in the face.

Glass then turned his attention to Panthers defensive back Paris Ford and delivered a fist to his face as well — and also appeared to have inadvertently hit the center judge, who was trying to separate the two of them.

The official crumpled to the ground. Not a good look for Glass, especially in real time. But slow-motion replays showed that Glass’ fist actually made contact with the official’s hat, not the official himself.

That led some on social medial to speculate that the referee, for whatever reason, flopped.

The ref with an epic flop pic.twitter.com/kw02HEdYqw

Refs have called so many James Harden fouls that they’re starting to flop like him #QuickLaneBowl pic.twitter.com/GcO8Kf9x1h

Upon even closer inspection, it appears the official might have gone down after making contact with Ford’s shoulder pads. Luckily, he sat up on his own and appeared to be OK.

Glass took responsibility for his actions after the game.

“He’s in tears in the locker room, begging me to talk to the team before I could say a word,” Eastern Michigan coach Chris Creighton told reporters. “He made a mistake and he is truly sorry for it.”

Glass later tweeted: “I let God and my family down.”

I let God and my family down!