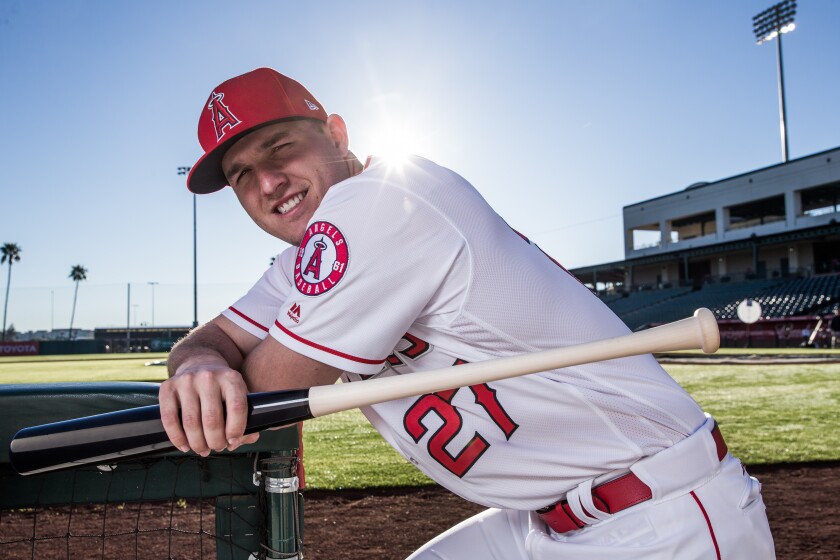 Mike Trout was accused of having an exemption to use HGH. MLB and players union say no one does

An ugly week for baseball marred by the fallout from the Houston Astros’ sign-steal scandal ended with the commissioner’s office and the players association forcefully shooting down speculation that Angels star Mike Trout has been using human growth hormone.

Trout, the three-time American League most valuable player and eight-time All-Star, was not mentioned by name in Friday’s joint statement issued by Major League Baseball and the union, which read, in part:

“Since the inception of the MLB-MLBPA Joint Drug Prevention Program, no major league or minor league player has ever received a therapeutic use exemption for, or otherwise received permission to use, Human Growth Hormone (HGH).”

But the statement was clearly a response to a controversy that flared hursday when NBC Sports Northwest reported an accusation in an Instagram post from David Brosius, the son of former New York Yankees third baseman Scott Brosius, who was the Seattle Mariners third base coach in 2017.

In expanding on Houston’s sign-stealing scandal, David Brosius wrote, “If you want to read something better, Mike Trout takes HGH for a ‘thyroid’ condition. It’s a loophole he found and the MLB doesn’t make it public because they don’t want fans knowing their best player is on HGH. But people within know …”

Brosius walked back his accusation and apologized in another Instagram post Friday, saying he was merely “explaining how there are certain situations in which actions that would usually be against the rules and considered cheating are deemed OK for medical or other reasons, thus not cheating.

“The example I used of Mike Trout does not stem from information from my Dad or sources within MLB and has no evidence behind it. I had no intention of this becoming an accusation against Mike Trout or causing the uproar it did.”

But the issue intensified Friday morning when Yahoo Finance reporter Daniel Roberts tweeted comments from a conversation he had with Cincinnati Reds pitcher Trevor Bauer about the Astros’ scandal.

“Trevor Bauer tells me Mike Trout has an exemption from the league for therapeutic HGH for thyroid issue, and that players know this and generally don’t care,” Roberts tweeted. “Says there’s a whole complicated process to qualify for such an exemption from MLB.”

“Update: Bauer now, through his P.R. people, tells us that he said or meant to say that ‘IF’ Trout has this exemption, he has a league-approved medical exemption. Bauer clarifies that he doesn’t know whether Trout has one or not.”

Players, through their personal physicians, can seek to use substances on baseball’s banned list, but they must be approved by baseball’s doctors. The majority of therapeutic use exemptions have been for drugs that address Attention Deficit Hyperactivity Disorder (ADHD).

If the independent program administrator of the joint drug program granted a therapeutic use exemption for HGH, he would be obligated to include it in his annual public report.

But an exemption for HGH has never been granted to any player since 2008, when data was first publicly disclosed after the release of the Mitchell Report.

The Angels’ only response to the controversy was to issue a statement saying they “support the joint statement by Major League Baseball and the Major League Players Assn. regarding the therapeutic use exemptions.”