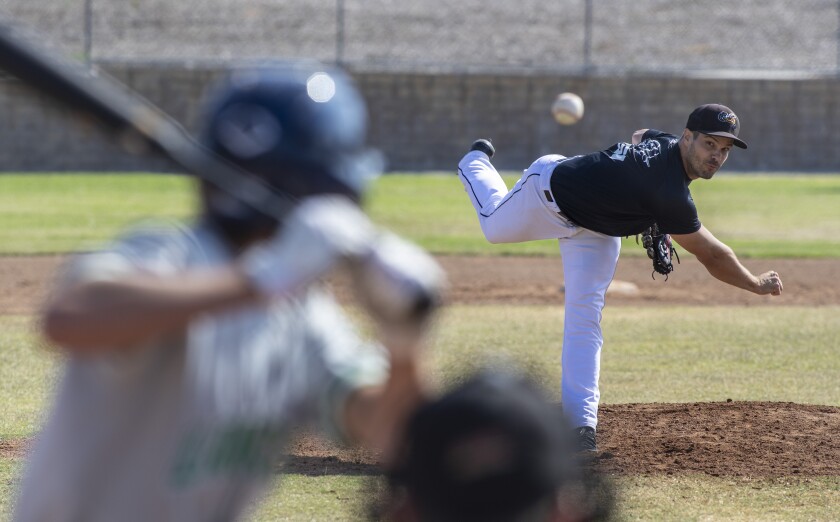 Editor’s note: This is one in a series of stories about how the coronavirus shutdown has affected minor league baseball players.

Baseball may have given up on Jeff Johnson three years ago, but the 30-year-old right-hander from Thousand Oaks hasn’t given up on the game.

His elbow rebuilt after a second Tommy John surgery, his spirits buoyed by another chance to pitch in front of big league scouts, the former Cleveland Indians prospect has secured a roster spot in a four-team independent league scheduled to open a season of about 50 games in the Houston area July 10.

“I’m just chasing a dream, man,” said Johnson, a former Thousand Oaks High and Cal Poly standout. “I love baseball more than life itself. There hasn’t been a day that’s gone by that I’ve lost focus of achieving that dream of pitching in the big leagues. I haven’t given up.”

When the Atlantic League canceled its season because of the coronavirus in late June, the Sugar Land Skeeters opted to launch their own four-team league at Constellation Field, where, pandemic permitting, games will be played — with fans — through late August.

But to illustrate the fragility of such an endeavor, the league announced Monday that opening day will be pushed back by a week — play was originally scheduled to begin Friday — because of the rapid rise of COVID-19 cases in Texas the last two weeks.

“It’s going to be a play-it-by-ear thing, like it has been,” said Johnson, who is scheduled to fly to Texas on Monday. “I’m just hoping Monday gets here and nothing else changes.”

If the Skeeters are able to play, the 22-man rosters for each team will feature former big leaguers, minor leaguers and current independent league players.

With minor league seasons canceled because of COVID-19 and big league teams bringing a maximum of 60 players to camp, Johnson believes the Skeeters, who have had 25 players sign with major league organizations since 2018, could provide the best springboard.

“So many minor leaguers have been released, and you’re gonna have your big league squads and your taxi squads,” Johnson said. “After that, it’s kind of a big question mark as to who are they gonna go to if they have injuries, if guys don’t perform the way they think they should.

“I feel like this is going to be a very heavily scouted league. This is the place I wanted to be.”

Angels prospect Chris Rodriguez is healthy after losing the entire 2018 season and most of 2019 to back injuries, but he’ll have somewhere to pitch in 2020.

But there was no promotion to the big leagues when rosters expanded in September 2016. Cleveland had one of baseball’s best bullpens, which keyed a World Series run that October, and there wasn’t a great demand for a 6-foot, 200-pounder whose fastball topped out at about 93 mph.

Johnson, who also throws a split-fingered fastball and slider, had a so-so 2017, going 2-1 with a 3.27 ERA in 50 games for Columbus. He became a minor league free agent despite striking out 303 batters in 266 minor league innings.

“I figured there would be 29 teams reaching out to me and trying to pick me up because I had nothing but success from 2012-2017,” Johnson said. “But once I became a free agent, nothing happened. It was bizarre.

“It seems like the game started transforming a bit, to where everyone wanted big guys who throw hard. I’m not that 6-6 guy who’s blowing 100 mph. I rely on location, movement and deception. I don’t care how it looks. My job is to get outs, and that’s what I’ve done.”

Johnson called the rejection “heartbreaking,” but it didn’t deter him. He pitched in the Mexican summer and winter leagues in 2018, posting a 1.88 ERA and 14 saves in 58 appearances, and was set to pitch for the Skeeters in 2019 when his elbow gave out again.

The chance for a similar outcome is why Johnson will quarantine himself in a hotel for two months while playing baseball in a state experiencing significant increases in positive COVID-19 cases and hospitalizations.

“The potential reward is worth the risk,” Johnson said. “This is the opportunity I’ve been waiting for, in my mind, for quite some time. I’m just excited to play baseball again. It’s been a year and a half since I’ve been in a competitive game.”