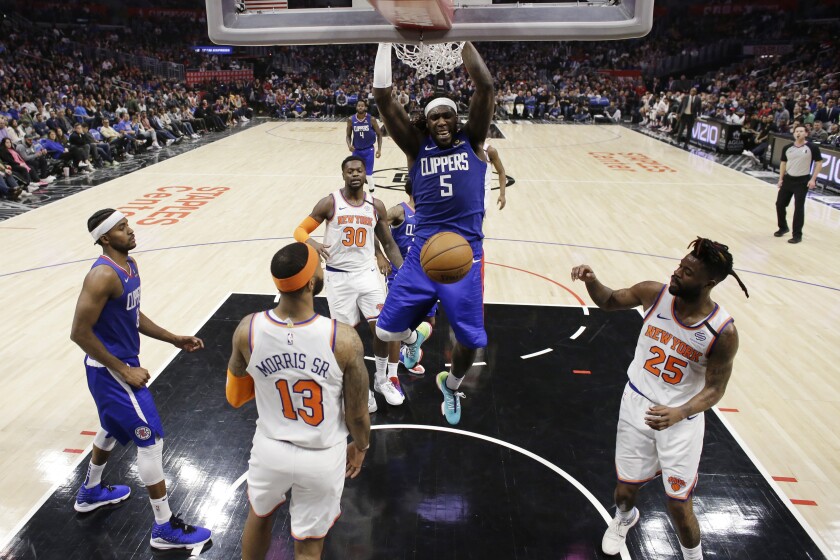 Because he was facing his locker, Montrezl Harrell couldn’t see it.

But as he dressed Sunday afternoon, the waiting crowd behind him had grown, taking up nearly half the locker room’s real estate.

The day before, in front of a much smaller group of reporters, Harrell had ripped his team’s effort following a 26-point loss to Memphis. Harrell was far from the only Clipper to point the finger inward. But his criticisms were unsparing and, because of it, had reached far corners of the basketball internet. And so, the next day, a pack encircled him, four- and five-deep in some places, to wait to hear what he would say after another game in which defense proved optional.

Harrell finally turned to face the group, and cameras and microphones moved closer. Instead of pausing for an interview, he did what he had done all afternoon at Staples Center, during a 135-132 victory against New York. The 6-foot-8 center created a hole through traffic and was not stopped.

A day after the Clippers’ post-Christmas inconsistency was put in the spotlight amid their eye-opening Memphis defeat, Harrell provided stability from start to finish. A day after noting that he did his job “day in, day out,” he backed up those words against the Knicks, tying his career high with 34 points in a game coach Doc Rivers termed “phenomenal.”

“Won’t be the last time he do it,” said guard Patrick Beverley, who had six points, six assists and five rebounds in his first game since Dec. 28 because of a sprained right wrist.

Harrell was part of a bench that scored 85 points, fifth-most in franchise history, thanks to 32 from fellow reserve Lou Williams. They, in turn, were part of the first trio in Clippers history to score 30 or more points in the same game, after Paul George added 32 points.

Added George: “We saw the tandem of Lou and Trez at their best.”

Rivers also saw the defense at some of its worst. Considering the season-high 140 points allowed only 24 hours earlier, giving up 45 to the Knicks in the first quarter was an ominous start.

Without having to face the defense of Kawhi Leonard, who missed his 10th game, New York (10-26) opened a 16-point lead in the first quarter and shot 57% from the field for the game, including 52% on three-pointers. Even after scoring 114 points through three quarters, the Clippers achieved breathing room but not closure.

Marcus Morris scored a career-high 38 points, making six of his seven three-point tries, and single-handedly kept the game close in the final minute by scoring five points in the final 42 seconds.

“Have we ever won a game where the other team shot 57%?” Rivers asked afterward.

The Clippers’ best defense was an offense that shot its way out of trouble. Los Angeles made 54% of its shots — including 56% on three-pointers — and needed every point, including the four they scored off technical free throws. The Clippers’ 47 points in the second quarter helped them lead 76-69 at the half and represented the highest-scoring quarter by the franchise since March 7, 1986. Williams scored 18 in the quarter, off five three-pointers.

Paul George on the Clippers’ trio of 30-point scorers pic.twitter.com/POJvbF814V

“It’s bad defense on both sides,” Williams said. “I’m sure it’s exciting for the fans, but it’s probably a coach’s nightmare.”

After taking a 15-point lead in the third quarter the Clippers saw their advantage trimmed to three with 5:18 to play in the fourth quarter, and then again four more times.

Harrell and Williams combined for 14 points in the fourth quarter, keeping the Clippers steady after George picked up his sixth foul with seven minutes to play, only eight seconds after earning his fifth foul. Rivers called his decision “stupid” to leave George in after his fifth foul. The Clippers then put their trust in their starring duo off the bench.

“It was almost like they locked in down that stretch and they made every big play and basket that we need,” George said.

Rivers said he liked that players were vocal in their criticisms following Saturday’s loss, saying it punctured any notion that the superstar-laden team had already achieved anything through its first two months. The comments from players such as Harrell also underscored Rivers’ own that the team needed to improve.

“We are fortunate enough to get a win tonight,” Beverley said, “but we got a lot of work to do.”

Sunday’s effort, even in a win, provided more evidence of that, not that Harrell needed to point it out, not after he’d done his job, just as promised.