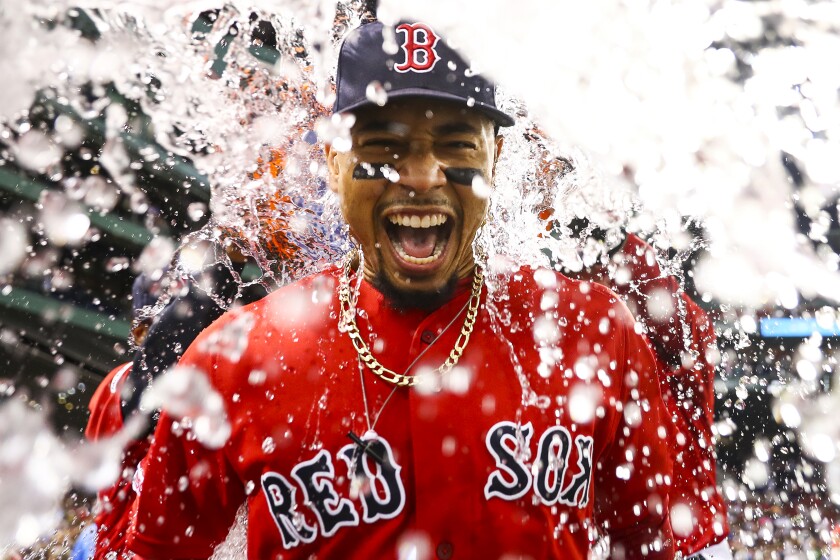 Mookie Betts and David Price, after much delay, to join Dodgers in revised deal

Nearly a week after originally agreeing to a seismic trade that would’ve sent Mookie Betts to the Dodgers before Boston Red Sox got cold feet at the finish line, angering people at all levels of the baseball industry, the two sides have finally agreed to a slightly different deal Sunday, according to two people with knowledge of the situation.

The Red Sox, a deep-pocketed franchise seeking to spend less money and dip under the collective balance threshold, still will ship the superstar Betts and starter David Price with cash to the Dodgers. The Red Sox will receive outfielder Alex Verdugo with two prospects: middle infielder Jeter Downs and catcher Connor Wong.

The first variation of the agreement, which was leaked Tuesday, had the Minnesota Twins sending pitching prospect Brusdar Graterol to Boston and receiving Kenta Maeda from the Dodgers. Downs and Wong were not part of that deal.

On Sunday, the Dodgers and Twins agreed on a separate deal not involving Boston. In it, Maeda would still go to Minnesota along with $10 million and a prospect, but Graderol would be sent to Los Angeles, not Boston, along with the No. 67 pick in June’s draft and a prospect. Both transactions are pending medical reviews.

The trades are expected to trigger a third agreement involving the Dodgers, who would send outfielder Joc Pederson and right-handed pitcher Ross Stripling to the Angels for infielder Luis Rengifo. Prospects could also exchange hands.

The deal would amount to a salary dump for the Dodgers in their quest to get under the competitive balance tax while taking on Betts’ $27 million this season and half of the $32 million Price is owed over the next three seasons. Pederson will make $7.75 million and Stripling $2.1 million in 2020 while Rengifo will make less than $600,000 as a second-year player.

The original deal got complicated Tuesday night when the Red Sox, after agreeing to take Verdugo and Graterol as compensation for Betts and Price, refused to proceed when they reviewed Graterol’s medical records. Graterol, 21, underwent Tommy John surgery in 2015 and missed two months with a shoulder impingement. The Red Sox deemed him too much of a risk and, as a result, Boston sought a different return package for Betts and Price.

The Red Sox had planned to use him as a starter, but they concluded after reviewing the records that his arm is better suited as a reliever. The Dodgers apparently thought differently of Graterol’s health record, or are perfectly fine with his 101-mph fastball coming out of the bullpen.

By Friday, the delay had peeved Scott Boras, Graterol’s agent, and MLBPA executive director Tony Clark enough that they publicly denounced the situation. Boras defended his client’s health. Clark lambasted the process in a statement.

“The proposed trades between the Dodgers, Red Sox, Twins and Angels need to be resolved without further delay,” Clark said. “The events of this last week have unfairly put several players’ lives in a state of limbo. The unethical leaking of medical information as well as the perversion of the salary arbitration process serve as continued reminders that too often players are treated as commodities by those running the game.”

The trade’s completion registers as a loud finale to the offseason for the Dodgers after they whiffed in previous attempts to land a superstar player.

They managed to acquire Betts, perhaps the best player in baseball not named Mike Trout, without giving up one of their top prospects. Betts, 27, is in his prime. He won the 2018 American League MVP after batting .346 with a 1.078 on-base-plus-slugging percentage and 32 home runs as the Red Sox toppled the Dodgers to win the World Series. Last season he hit .295 with 29 home runs and a .915 OPS. His 17.0 WAR over the last two years is second only to Trout’s 18.4.

Betts will slot in atop the batting order to upgrade the already potent offense. Widely considered the best right fielder in the sport, he will stand next to center fielder Cody Bellinger, giving the Dodgers a superb defensive outfield.

He will enter free agency next winter — part of the reason the Red Sox traded him was they believed they didn’t have a chance to keep him — but the Dodgers have deep pockets and are intent on extending the marriage.Price, 34, isn’t the elite pitcher he was a few years ago but he also isn’t just a bridge to Betts. If healthy, the 34-year-old Price can bolster a rotation that lost fellow left-handers Hyun-Jin Ryu and Rich Hill in free agency.

The 2012 American League Cy Young Award winner, Price posted a 3.84 earned-run average in four seasons with the Red Sox. A move to the National League West, a division with more spacious parks in the league without a designated hitter could boost his effectiveness.