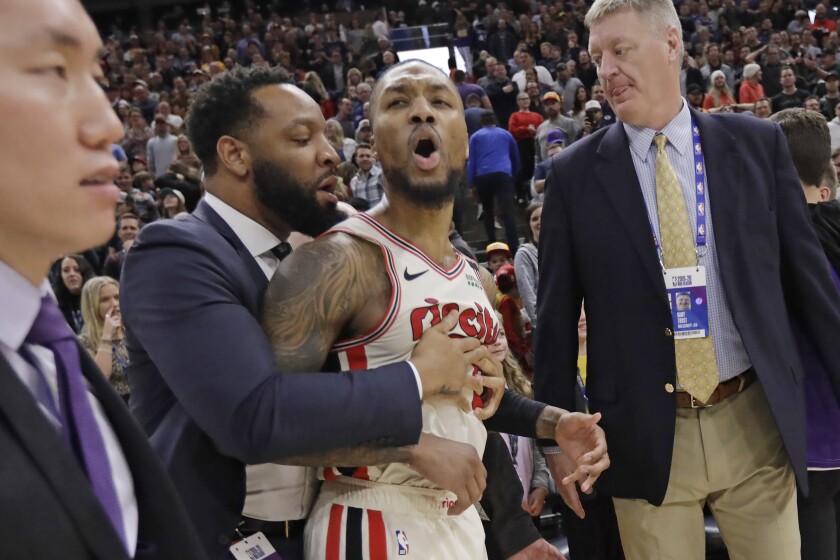 There was Portland’s Damian Lillard, one of the NBA’s coolest stars, with steam coming out of his ears and expletives firing out of his mouth.

The Trail Blazers had just lost a tight game in Utah, a game that could’ve been very different if referees hadn’t missed an obvious late goaltend by Jazz center Rudy Gobert on a potential tying layup by Lillard.

The play was ineligible to be reviewed because no call was made.

Missed calls happen all the time in the NBA — after that game, Dallas owner Mark Cuban tweeted that the NBA admitted to missing five goaltends in a single quarter in his team’s loss to Utah in late January. But this was public, at the end of a very entertaining game on a night when the league had a light schedule.

“It’s an easy call,” Lillard told reporters after game. “Three referees out there and they don’t call that? And I don’t want to see … a report about ‘Oh we should’ve called that’ or none of that. They cost us the game. We’re in a playoff race and they cost us a game.”

Since 2015, four teams have missed the playoffs either by one game or via tiebreaker, so Lillard’s gripes aren’t overly dramatic. It could end up mattering.

One possible solution to avoid situations like this is to expand review of instant replay. But it’s hard to tweak the rules to allow officials to review missed goaltending calls because play doesn’t stop unless there’s a whistle.

A better solution could be more drastic — the addition of a fourth official, either on court or in the arena, who would watch the game live on a monitor and trigger reviews with a buzzer.

Perfection is impossible, but trying to keep things like this from happening should be a priority for the league.

It seemed like the Oklahoma City Thunder were set to follow the Clippers’ lead from a year ago, trading a top player at the deadline while still very involved in a playoff race. While they weren’t able to extract a Tobias Harris-style return for Danilo Gallinari, it seemed like they were on the doorstep of receiving assets for Gallinari from Miami before he becomes a free agent this summer.

Even though a deal didn’t get done, the Thunder remain one of the best stories in the NBA, dealing Paul George and Russell Westbrook this summer before bouncing back to be in the middle of the playoff field.

Since Dec. 27, the Thunder have the best record in the Western Conference — the third-best overall — with 17 wins and only five losses.

If they stay healthy, they’ll be a dangerous first-round playoff opponent.

Phoenix forward Kelly Oubre, who was the subject of trade rumors at the deadline, responded with his best game as a pro, scoring 39 points in an upset win over Houston on Friday night. … While there’s been a bizarre amount of complaining about snubs for All-Star weekend, including the Rising Stars game, Toronto’s Terence Davis might have the best case. Davis, an undrafted rookie from Mississippi, has played remarkably over the last week, averaging nearly 20 points in two wins over Indiana and one over Chicago. … Philadelphia didn’t do anything major at the deadline, despite detractors around the league. Before beating Memphis on Friday, the 76ers went 0-4 on a road trip with losses to Milwaukee, Miami and Boston.

Sign up for Full-Court Text with NBA reporter Dan Woike