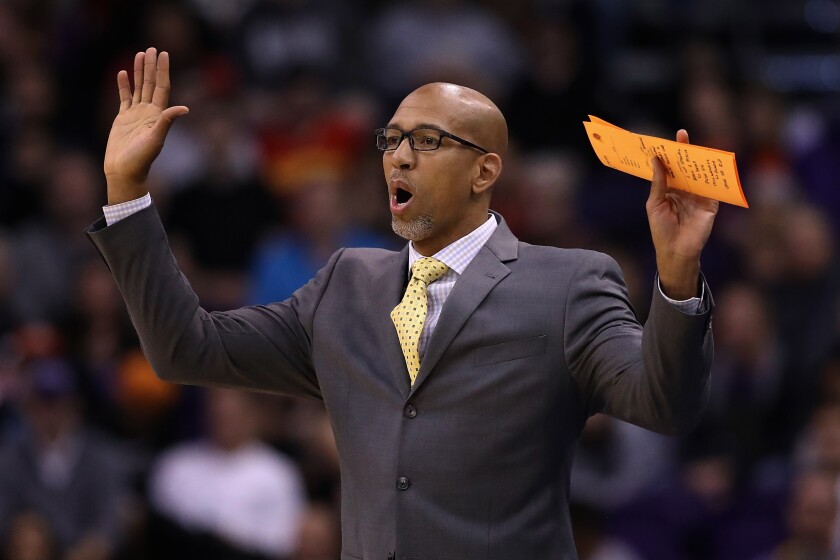 Net rating is a great stat to use when trying to find out which teams have the goods to be a contender.

While the sample sizes are way too small at this point, less than 10% into the season, the top of the net rating standings confirms a lot of what people think. The Lakers lead the league thanks to much-improved defense and plenty of offensive potency. Right behind them are the Philadelphia 76ers, one of the big favorites in the East.

Yup, the team that’s dwelled in the bottom five of the NBA net rating for so long that it has squatter’s rights is off to an incredible start this season and is one of the biggest surprises.

How have the Suns done it?

“Coaching,” Clippers coach Doc Rivers said. “I’m serious. And they’ve added some good players, but it’s coaching. Monty Williams is a hell of a coach. And more than anything, he’s a great leader of people. They haven’t had any leadership like that. And that’s what it is.”

Scouts and coaches who have watched the Suns don’t expect Phoenix to stay near the top for long. But they all point out Williams’ place on the bench, as well as the addition of capable veterans like Ricky Rubio and Aron Baynes to a team with good young players like Devin Booker and Kelly Oubre Jr. Even Deandre Ayton’s 25-game suspension hasn’t slowed them down.

The Suns probably won’t keep winning at this rate, but they have the talent and the coaching to be a pain whenever they play.

It should never be surprising to see the San Antonio Spurs in the mix in the West, and two weeks into the season, here they are again.

LaMarcus Aldridge, save for a clunker against the Clippers, has been his consistent self, and DeMar DeRozan is still a mid-range, foul-drawing monster.

But it’s been the Spurs’ backcourt quartet of Bryn Forbes, Derrick White, Patty Mills and Dejounte Murray that has them out to a 4-1 start. The four guards combine for 54.2 points and 9.8 assists.

Murray is the star of the group. Despite being on a strict minutes limit, he’s flashed enough to elicit some comparisons to Russell Westbrook because of his energy and motor. On defense, he’s like an octopus, third in the NBA in deflections despite playing only 23 minutes per game.

Forbes, a free agent after the season, has been the biggest surprise, working through the Spurs’ development system until injuries forced him into a consistent role last season.

Coach Gregg Popovich compared Forbes’ movement to that of Stephen Curry and JJ Redick — the highest of praises.

The LeBron James-Luka Doncic duel Friday night was one of the best shows this season. With 14 years separating the two, James and Doncic ended up setting a record for the biggest gap in age between two players with triple-doubles in the same game. … Curry’s broken hand needed surgery and will keep him out at least three months, surely pushing the Golden State Warriors into a lost season. The first-round pick they sent to Brooklyn in the Kevin Durant sign-and-trade deal is top-20 protected and seems like it’ll be staying in the Bay Area. ... Three Eastern Conference contenders — Milwaukee, Miami and Toronto — visit Los Angeles in the next week. Miami’s Kendrick Nunn might be the unlikeliest early season star on any team, becoming the first rookie to score 100 or more points in his first five games since Durant. He’ll face the Lakers on Friday.