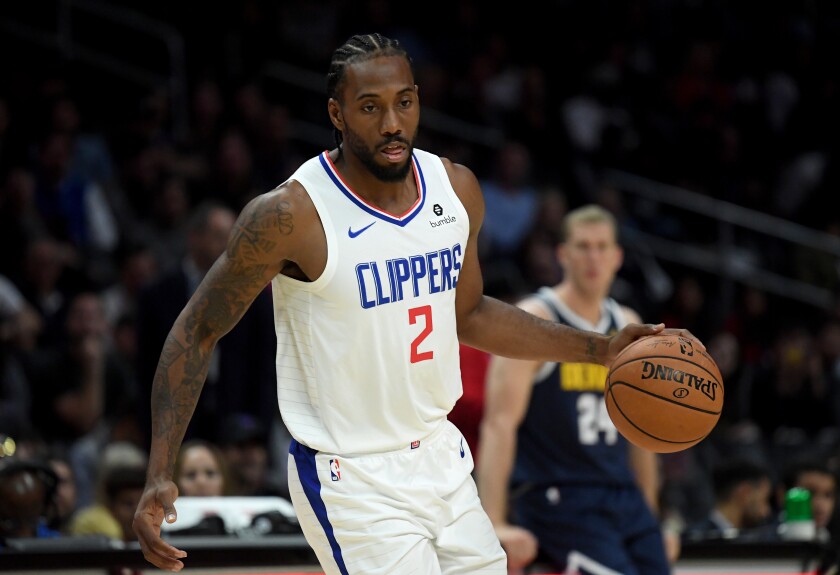 NBA general managers pick the Clippers to win the title

NBA.com released its annual survey of the league’s 30 general managers, and guess which team received the most votes to win the NBA title? Didn’t you read the headline? It’s the Clippers.

The Clippers received 46% of the votes, finishing ahead of the Milwaukee Bucks (36%) and the Lakers (11%). The Golden State Warriors and Portland Trail Blazers also received votes.

The Clippers were also picked as having the best overall offseason and making the single most important personnel move (signing Kawhi Leonard).

Milwaukee’s Giannis Antetokounmpo was picked to repeat as the MVP, receiving 52% of the vote. Stephen Curry (Warriors), Anthony Davis (Lakers) and Leonard were the runners-up, each receiving 10% of the vote.

The GMs responded to 50 questions about the best teams, players, coaches, fans and offseason moves. They were not permitted to vote for their own team or personnel. Percentages are based on the pool of respondents to each particular question, rather than all 30 GMs.

Some Detroit Lions fans are still not over a series of bad officiating calls that cost them a victory over the Green Bay Packers on Monday.

There was a noncall for pass interference and two illegal use of hands penalties that aided the Packers in their 23-22 win.

The NFL has since admitted that one of the calls should not have been made, and the league reached out to Detroit’s ownership group to address it.

On Wednesday, billboards began popping up along major highways in Detroit this week that feature a referee making a penalty call while wearing a cheesehead, which is what Packers fans wear to games.

What is your favorite all-time local sports moment? Email me at [email protected] and tell me what it is and why and it could appear in a future daily sports newsletter or Morning Briefing.

This moment comes from Mal Wilk of Sherman Oaks:

On Friday, April 18, 1958, the Los Angeles Dodgers hosted the San Francisco Giants in the first regular-season MLB game played in Los Angeles. As an avid baseball fan and a Dodgers fan, I was determined to see this historic event.

I also wanted to take my 8-year-old son, David, who also loved baseball, but Friday was a school day; so I wrote a note to Dave’s third-grade teacher and said I thought that David’s overall education would be enhanced by being able to attend. She agreed and gave her approval and so Dave and I were part of the 78,672 people at the L.A. Coliseum to see the Dodgers beat the Giants 6-5 when the Giants’ Jim Davenport missed third base on Willie Kirkland’s triple in the ninth inning.