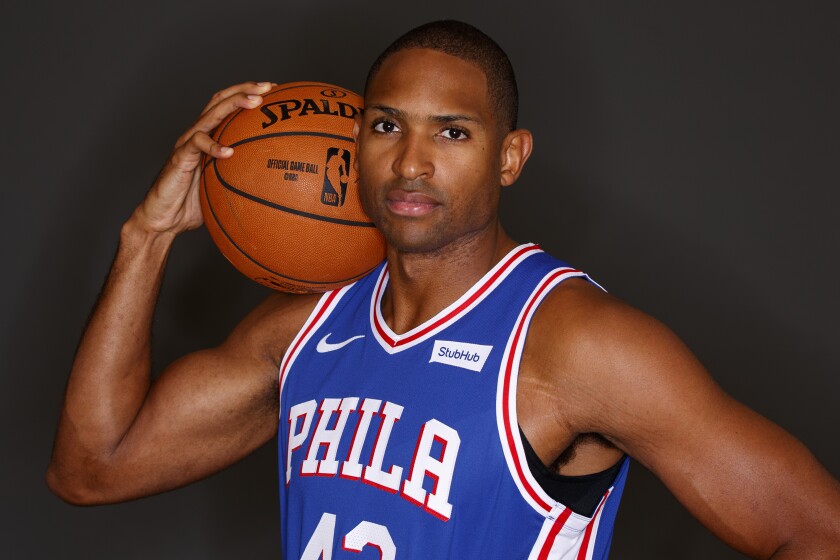 NBA preview: Al Horford could be key to a 76ers title run

There’s a coded language that basketball people use to describe players in the league, particularly players who aren’t, relatively speaking, very good.

Coaches will talk about how they embrace the little things and the fundamentals, with the implication being that the big things and the spectacular aren’t available. They’re good communicators and good teammates. They set great screens. They’re solid professionals.

In a summer when there was so much player movement in the NBA, with such stars as Kawhi Leonard and Kyrie Irving swapping teams, Horford’s move from Boston to Philadelphia could end up being the most meaningful.

He’s a unique player in the NBA, a four-time All-Star with the Atlanta Hawks and once with the Celtics who earned those spots in seasons he did not average more than 15.3 points.

He’s a difference maker on defense who doesn’t block many shots or get many steals.

He’s an offensive weapon who doesn’t score often and a great passer who doesn’t get many assists.

It’s not that he lacks skills, it’s that he’s capable of almost anything on the basketball court. But Horford’s best abilities live in the margins on the box score, the rare player who can dominate a game with the scorekeeper largely ignoring him.

“I think you always want more acknowledgment, no question about that. But I do believe over the years, people around the NBA, coaches, people that get the game, have been able to appreciate that from me,” Horford said. “And for me, that feels good. The average person probably doesn’t understand some of the things I do. It’s something where you want to get more recognition, but at the end of the day, I’m very confident.

“And I’m at the point in my life where I want to win championships.”

It’s why Horford pulled off a bit of a stunner this summer and picked Philadelphia, joining Joel Embiid, Ben Simmons, Tobias Harris and Josh Richardson in what should be the most talented starting lineup in the league.

It’s also maybe the biggest — at 6-foot-6, Richardson is the shortest in the group. Supersizing the lineup was no accident.

Philadelphia general manager Elton Brand saw his team get outworked on the boards in a brutal seven-game series against Toronto in the Eastern Conference semifinals. He saw his team’s defense disintegrate when Embiid left the court. And he saw the rest of the conference — particularly the Milwaukee Bucks — playing with plenty of size.

He meshed those visions with the leaguewide desire for players who could play multiple positions. For most of the NBA, that means smaller players who are able to play bigger than their size. For the 76ers, it’s about giant players talented enough to do things smaller players can do.

That is most obvious on the defensive side of the court, where the 76ers will make it difficult for opponents to score. Embiid is one of the favorites to win defensive player of the year. He has the talent to be a candidate for most valuable player. Simmons’ combination of quickness and his 6-10 height make him a nightmare for opposing guards.

The 76ers added Richardson, an underrated two-way guard, as part of Jimmy Butler’s sign-and-trade deal that sent him to Miami. They drafted defensive savant Matisse Thybulle from Washington and signed Horford.

It’s a perfect fit for a player who badly wants to win an NBA title that has eluded him in 11 trips to the postseason.

“One of the things I feel likehas always put me in a positionto be successful is I’m always thinking about the team and winning. That’s always been true for me since my first day in the NBA,” said Horford, who averaged 18.6 points in his best season in 2013-14 and 13.6 last season.

“It’s never been about numbers. It’s been about making sure I’m helping the team win.”

Philadelphia committed nearly $110 million over the next four years to Horford. Before that, Boston paid Horford more than $26 million for each of the previous three seasons.

“He’s so cerebral,” Detroit coach Dwane Casey said. “He reminds me so much of Tim Duncan. He’s quiet, doesn’t say very much, fundamentally sound and so efficient. It’s his basketball IQ. He’s a glue guy.

“He makes the right play, the right pass, at the right time. It may not show up on the stat sheet, but he made plays that kick your butt.”

Almost immediately in Phil-adelphia’s preseason, the 76ers have seen the benefits, the ones not easily quantified.

There’s no statistic that shows the value of Horford urging Embiid to pick up a ballhandler in a pick-and-roll set.

“It’s something that’s very small, very slight, but I feel like it makes a difference,” Horford said of the adjustment. “I don’t know the math, but I know they impact the game because they’ve worked for me.”

Philadelphia is sure that Horford is going to work for them. He’s insurance for Embiid while also giving them a versatile power forward who can play next to the talented center. Horford is already a leader, Simmons said, as well as a winning player who has mastered winning habits.

He can score, rebound and assist, but it’s the intangibles that overshadow the statistics, which is what Philadelphia needs.

Before the 76ers played the Magic in a preseason game, the team went through a shoot-around at Freedom High in Orlando. Horford didn’t score any points or compile any stats at the walk-through. But he showed the team why he’s worth the $200-plus million he’s earned in the NBA.

“He is as fundamentally prideful in situations where there’s no media, there’s no crowd. It’s at 10 in the morning in a high school gym at shoot-around. And you see him sitting in a stance. You see him with his thumbs to his ears on the backside of the defense and talking,” 76ers coach Brett Brown said. “You see him purposefully and pridefully go set a fundamentally correct screen. And he’s just a professional. He’s really a pro. That’s so priceless.

“Seeing this person with thisresume and experience take a 10 a.m. thing at a junior high gym and pretend like we’re about to go play Game 7. That isn’t 20 points and 15 rebounds, but it’s a lot.”