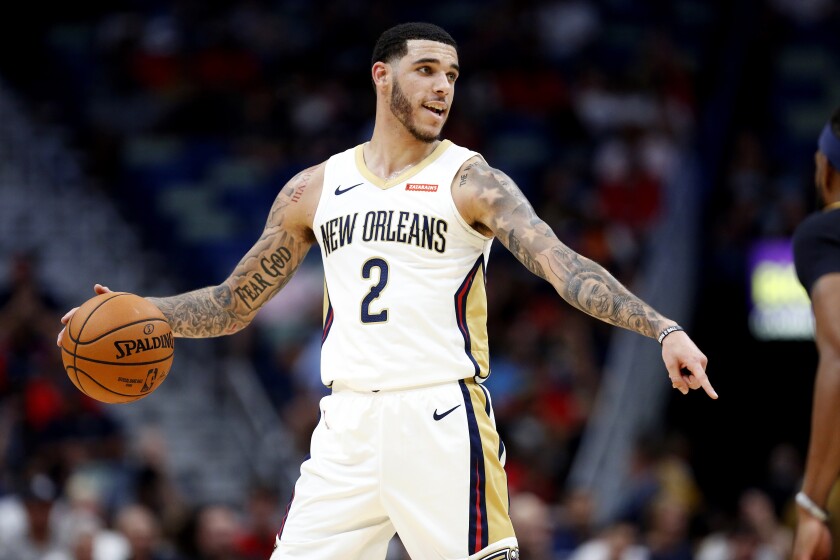 Lonzo Ball and Brandon Ingram sat next to each other on the bench during the preseason opener, belly-laughing after a private joke.

If they had still been playing for the Lakers, this would’ve been the news of the night — two key players returning from injuries, having fun in their return to the court. But they’re not in Los Angeles. They’re in New Orleans, teammates with No. 1 overall draft pick Zion Williamson, who was debuting that night. And because of that, no one really noticed.

And for Ball and Ingram’s future, that might just be perfect.

Everything for the two former No. 2 overall draft picks is cleaner now that they’ve left the Lakers behind. They’re a part of an up-and-coming team instead of one that wants to win now. They’re ready to run instead of slowing things down. They’re ready to figure out exactly who they are as professionals without having to save a franchise. And they’re not bait on the Lakers’ hook anymore.

If all goes well, the Pelicans could challenge for a playoff spot as soon as this season — and it’s hard to imagine them getting there without breakout seasons from the two former Lakers.

Appreciation is a nice step back from how Ball began his career.

One day after being picked by his hometown team, his new boss, president of basketball operations Magic Johnson, proclaimed the 19-year-old rookie the new “face” of the franchise before he even played a single NBA minute. Johnson wanted Ball to be a leader just like him, getting his teammates filling the lanes for easy buckets the same way James Worthy and Michael Cooper did for Johnson.

It meant expectations, particularly when Johnson begged Ball to not break all his records. Leave him one, maybe.

In the most outrageous moment, Johnson looked at a wall in the Lakers’ practice facility. He saw names like West, Chamberlain, Baylor and O’Neal and told the rookie, in front of all of Los Angeles, “We expect a Ball jersey hanging up there one day, all right? Good.”

For the Lakers to contend sooner rather than later, they would never be Ball’s team. They didn’t have time to groom a star; they needed to go out and sign one.

The next summer, the Lakers added LeBron James. And soon after, they set their sights on Anthony Davis. And with that, Ball’s jersey went from one day hanging on that wall to another roster.

“I was in trade talks for a long time,” Ball said. “I knew it was going to be my time soon enough. I was in them for two years, and then I had two back-to-back injuries. And I knew they had a chance to get Anthony Davis. They weren’t going to pass that up.

The change for Ball comes with his NBA career at an important crossroads. He said, trade or not, he was ready to go more out on his own, to manage his own career, his own endorsements, instead of ceding that control to his father, LaVar.

But that adjustment, undoubtedly, will be easier outside of Southern California, a place he’s spent his whole life.

“It was a good time for me to finally move on,” Ball said. “Who knows if I eventually go back or not? You never know what the future holds. But right now, I think I’m in the best situation for myself.”

Both Josh Hart, who was also dealt for Davis, and Ingram said they’ve seen some differences in Ball, seeing him even more locked in on basketball than before. Executives around the NBA think the Pelicans’ pace — they want to be the fastest team in the league — is more suited to his game than playing off the ball alongside Rajon Rondo or James.

Ball, though, will have to stay healthy for the first time as a professional, certainly a factor in the Lakers’ willingness to deal him — 99 games in two seasons makes it hard for someone to be a face of anything other than a suit company.

Same goes for Ingram, who hasn’t been healthy since his rookie season. In his last two years, he didn’t crack 60 games, with last year ending because of a blood clot in his arm. His path to success might be a shade murkier than Ball’s future, but there is optimism.

Scouts and executives believe Ingram’s best role on the Pelicans could be as the second unit’s primary offensive playmaker and scorer. Whether he’s amenable to that remains to be seen.

The opportunity for the former Lakers is there now in a way it would never be alongside James, at least not in the short term. They’re not bitter about it. They get it.

“It comes with the territory. It’s going to happen when a guy like LeBron chooses your team,” Hart said. “It was frustrating for us at times because we wanted more on our plate, we wanted to do more. But we also had to balance that with the older guys who were proven in this league.”

But it meant stunting their growth. Now, they’re on a team where their career trajectories should mirror Williamson’s, where the team is firmly on a path that they belong on too.

“It’s a fresh start,” Ball said. “And it was needed for me, and it came earlier rather than later, which was probably better for me. I like that we’ve all come together, and I think this new scenery was good for all of us.”

Now, we’ll see whether that fresh start is good for the Pelicans.