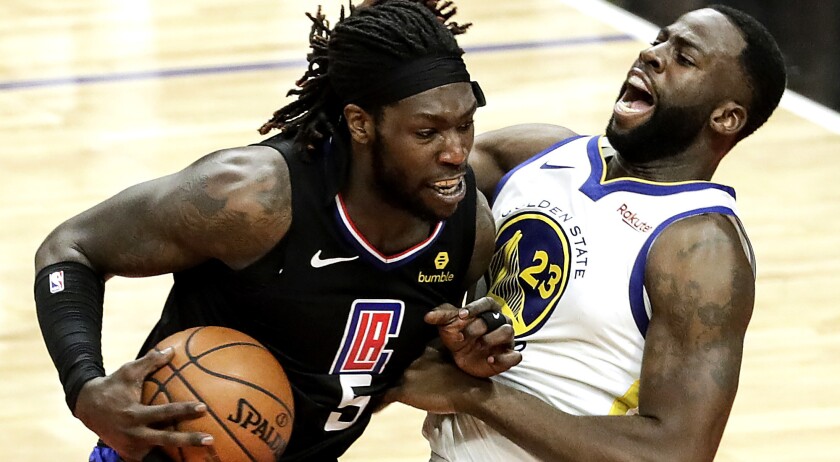 Clippers appear to have the firepower for first title, but they still have issues.

Here are the five biggest questions surrounding the team as it enters the 2019-20 NBA season:

1. Will the Clippers make a big in-season roster move for a third consecutive year?

Trading their leading scorer each of the last two seasons put the Clippers in contention to win titles. Mission accomplished. With All-Star forwards Kawhi Leonard and Paul George now on the roster and the team’s window to win a championship open, will the front office make another splashy move to increase those title odds? The Clippers have one spot still available on their 15-man roster and are expected to be patient in filling it. Whether that means adding a big man to help their interior defense or a playmaker on the perimeter, such as Memphis’ Andre Iguodala, don’t count out a team with a history of bold moves from making another.

To acquire George from Oklahoma City — and, in effect, earn the commitment of then-free agent Leonard — the Clippers traded almost everything but their mascot, Chuck the Condor. Giving up all-rookie point guard Shai Gilgeous-Alexander stung particularly deep, however, in two ways. Gilgeous-Alexander had the makings of a future star and was their primary ballhandler. Considering the rave reviews given to second-round pick Mann, it’s a possibility the void at point guard could be filled from within rather than a trade. Mann never played point guard at Florida State and his adjustment hasn’t been without challenges, but the Clippers can be patient as he improves the technical parts of the role. Mann is 6 feet 7, comes from a college program where defense was a priority and throughout training camp displayed an instinctual vision as a passer.

The Clippers were united in ways last season that team officials remarked they had rarely, if ever, seen. Their locker-room solidarity allowed their play to be greater than the sum of the roster’s parts. Some of last season’s most important leaders are back, but the team now has brand-name stars, and the hierarchy they bring, to consider. The Clippers are confident last season’s cohesion can be recaptured because Leonard’s and George’s lower-key personalities lend themselves to fitting in, but there’s no way to know how the holdovers and new faces will mesh until the first challenges arrive. “We’ve had no adversity, we haven’t lost a game, minutes haven’t been dispersed,” coach Doc Rivers said. “Everybody gets along. My guess is after the third or fourth preseason games when some guys are saying, ‘I’m not getting as many shots or I’m not getting any minutes,’ that’s when the chemistry starts, so we’ll know more.”

4. How will the Clippers ensure peak playoff performance from their best players?

George is returning from surgeries on both shoulders and is not expected to play until early to mid-November. Leonard was not fully healthy during last season’s playoffs and began taking part in full-contact practices only this month. Lou Williams appears ageless, as his consecutive honors as the league’s top bench player would attest, but he’s entering his 15th season. To win a title, the Clippers need that trio, which figures to provide the bulk of their scoring, to be healthy, but ensuring all are primed for the postseason will require finding a tricky balance. Resting will help the Clippers’ stars in the long run, but the strategy risks losing games in the short term. In a brutally competitive Western Conference, the Clippers will try to ensure their best players are primed for the postseason while still grabbing home-court advantage in the playoffs.

Clippers reserves didn’t average an NBA-best 53.9 points last season with smoke and mirrors. When Williams wasn’t driving to his left and looking to shoot, he and center Montrezl Harrell were running pick-and-roll plays. Opponents knew what was coming nearly every time, not that the advanced warning proved effective: The bench’s scoring average was the most in the NBA in 30 years. This season, the Williams-Harrell combination remains the heart of a unit the Clippers believe can be even harder to stop after the additions of guards Mann and Rodney McGruder and forward Maurice Harkless, who could come off the bench depending whether Rivers starts him or JaMychal Green. In addition, Harrell worked on a mid-range jump shot in the summer that he hopes will counter defenses who expect him to roll every time.