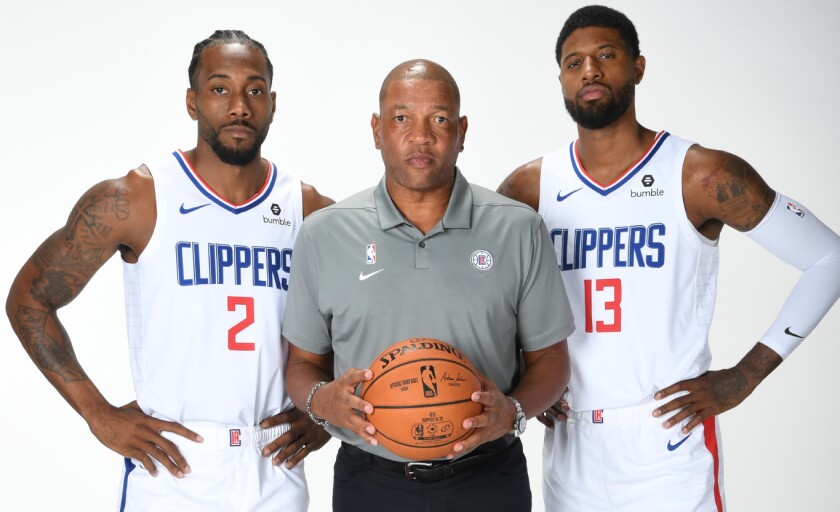 The disappearance was not noticed all at once.

Upon the Clippers’ return to Los Angeles from training camp in Hawaii this month, a few coaches and players caught wind immediately that something had changed while they were away. It took others more than a week.

Gradually, a realization swept through the team’s Playa Vista practice facility: A pair of banners commemorating the franchise’s 2013 and 2014 Pacific Division championships, which had hung over a practice court, were gone, and in their place a new, all-white banner had been raised.

Coach Doc Rivers never brought up the changes with his players and coaches in the days that followed. He didn’t need to. On the eve of an NBA season in which the Clippers are among the favorites to win the title, many had already been projecting their own meaning onto the blank slate.

“In my mind, it’s to get the past out of everyone’s mind and strive for something greater,” forward Patrick Patterson said. “Anything the Clippers have done, that’s in the past and for us, the main and only goal is to win a championship. So any accolades or accomplishments the organization has done before today is all irrelevant.”

Said second-year guard Jerome Robinson: “They’re not thinking like, let’s get another one of those. Let’s get a world championship up there.”

For some within the Clippers, a franchise that throughout its 50-year history had become shorthand for NBA futility, the change in decoration has been interpreted as symbolic of their turnaround in recent seasons and their aspirations moving forward.

By signing top free agent Kawhi Leonard and trading for All-Star forward Paul George — a combination their teammate, Maurice Harkless, called “probably the best two-way wings in the league” — the Clippers hope to push aside the team’s meager previous accomplishments and replace them with something worth remembering.

As interpreted by second-year guard Landry Shamet: “Where your mind goes is like OK … whatever’s happened leading up to this point. We want to be the type of team we want to be and achieve all this stuff people say we can’t.”

With the big moves, the Clippers accomplished a tricky offseason combination of adding stars necessary for realistic championship hopes without sacrificing the street-brawler attitude that defined last season’s team. The result is a roster with star power, depth and a legitimate belief it can challenge a handful of other teams for its first NBA Finals berth.

“We know what we’re capable of, we know we’ve got that talent,” center Ivica Zubac said. “So we’re not running away from it.”

More telling was the grin that accompanied the denial. The move carried all the hallmarks of a coach who has seen symbolism used throughout his four decades in the NBA, sometimes to great effect.

When Rivers became Boston’s coach in 2004, he had a spotlight installed in the team’s practice facility that shone, 24 hours a day, on a blank spot where the franchise’s next championship banner would one day occupy.

“The light on the wall in Boston, we never told players about,” he said. “They kind of figured out, what the hell is that light on for?”

Four years later, after Boston’s lone road game of the 2008 regular season against the Lakers, Rivers walked into the visiting locker room in Staples Center and demanded $100 each from Celtics players, coaches and staffers. He stuffed the $2,600 collection in an envelope and hid it above a ceiling tile. The message: If they wanted their money back, they’d have to return to the arena nearly four months later, in the NBA Finals. The Celtics got more than their money back — that June, they claimed the franchise’s 17th title after a six-game series against the Lakers.

When the 2008 championship banner was added to Boston’s practice facility, so too was a blank banner next to it, signifying the expectation of another title to come.

Upon arriving in Los Angeles in 2013, Rivers had a spotlight installed in the Clippers’ practice facility, too — but this time felt the need to tell a tradition-starved franchise why a bare patch of wall was suddenly illuminated. With championship aspirations surrounding the Clippers the following season, Rivers went back to Riley’s visualization playbook. As the Kings raised their 2013-14 Stanley Cup championship banner, the Clippers watched from a Staples Center suite.

But the Lob City Clippers withered under their own spotlight, never advancing past the conference semifinals and even the light itself, meant to evoke an opened championship window, instead accidentally signaled the end of an era. When the practice courts were upgraded to all-LED lighting, the original light’s beam wasn’t bright enough to be seen on the wall.

That window is again open because Leonard has thrived under the spotlight while winning NBA Finals most valuable player twice, with San Antonio in 2014 and in June with Toronto. No player has won the award with three teams. Those championship teams derived success from a common goal, Leonard said.

“That’s what drives a championship team, and, you know, you just figure out the bumps in the road on the way there,” he said.

The Clippers are hoping to follow the blueprint from Leonard’s last triumph.

With James out of the Eastern Conference picture last season, Leonard pulled the Raptors to their first Finals berth and championship.

This season, following Kevin Durant’s departure and Klay Thompson’s knee injury during the NBA Finals, the Warriors are no longer the colossus that has blocked the path to the Finals for five consecutive seasons. Several oddsmakers have picked Leonard’s Clippers to fill that void.

If they can claim the championship they believe can be theirs, it would begin to fill a void inside the Clippers’ rafters.

Patterson was inside Staples Center this month when he looked up and saw the blank canvas.

Confused, he asked assistant coach Rex Kalamian where the team’s banners had gone.

“Realizing that there’s nothing hung here, it’s mind-blowing thinking about all the players who’ve come through here in the past,” Patterson said. “But also, it’s a good feeling knowing that you can be the first to have something up there that will never be taken down.”