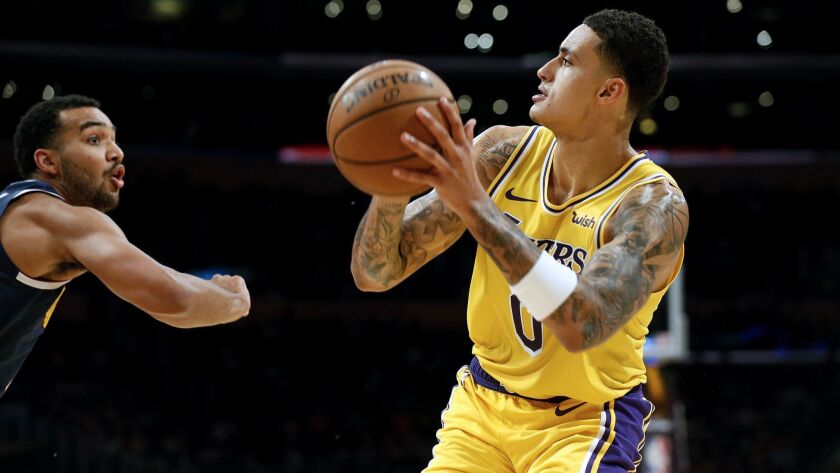 This is not the first season during the Lakers’ six-year playoff drought that they’ve entered with hope that their fate would change.

What’s different is that for the first time in six years, the Lakers have real championship expectations.

Here are the five biggest questions surrounding the team as it enters the 2019-20 NBA season:

The Lakers stubbornly held on to Kuzma during the summer’s trade negotiations for Anthony Davis because they believed in his potential. Kuzma averaged 18.7 points and 5.5 rebounds last season while starting in 68 games. For the last two summers he’s worked to refine his game, developing better ball-handling skills and working on his shooting. Last season his three-point percentage dipped, but his overall field-goal percentage rose. The third-year forward also has a confidence and a killer instinct that made him a favorite of Kobe Bryant. There will be a few obstacles for Kuzma, primarily that Anthony Davis prefers to play the position in which Kuzma excels. But the Lakers have the flexibility to be creative with their lineups and once he’s recovered from a stress reaction in his left foot, Kuzma could force his way into a big role.

The Lakers relied heavily on Rajon Rondo and often sang his praises for his influence on the rest of their young team last season. Statistically, the results were more mixed. According to Pro Basketball Reference’s on/off statistics, the Lakers offensive rating, rebounding percentage and effective shooting percentage were all slightly better with Rondo off the court than with him on it. So far during training camp and the Lakers’ preseason games, they’ve experimented with having all of their guards work on playing on and off the ball. They started LeBron James at point guard for their first exhibition game. That is an option that they’ll likely use liberally and could even be what their primary starting lineup looks like.

3. Will their two stars stay healthy?

That James had the first major injury of his career in his 16th season is a remarkable testament to the way he’s cared for his body. He sustained a severe groin strain in Oakland last year on Christmas Day, returned after five weeks, then was held out of games as a precaution. He’ll be 35 for most of the season and it’s fair to wonder what his injury situation will be in the future. Davis, on the other hand, is only 26 but has had several minor injuries throughout his career. He has never played a full 82 games in a regular season and played more than 68 games only twice. The Lakers have placed an emphasis on protecting Davis’ health this season.

The Toronto Raptors won a championship last season because of the aggressive way they remade their team before the season by trading for Kawhi Leonard and at the trade deadline by acquiring three-time All-Star Marc Gasol. The Lakers might have to show the same ability to be nimble as the Raptors. Teams might be more willing to part with their assets closer to the trade deadline; perhaps that will include the Memphis Grizzlies and Andre Iguodala, and by that time the Lakers will clearly understand their needs.

5. How does Frank Vogel’s relationship with Jason Kidd evolve?

Kidd is the top assistant on Vogel’s staff and the Lakers expect his Hall of Fame credentials as a player to be helpful with this veteran team. The prevailing thought from outsiders is that Kidd wants Vogel’s job, but on media day, Vogel said he rated his relationship with Kidd a 10 out of 10. Vogel recalled a conversation they had in which Kidd felt like he had skipped steps on his wayto becoming a head coach. Their relationship will be worth tracking.