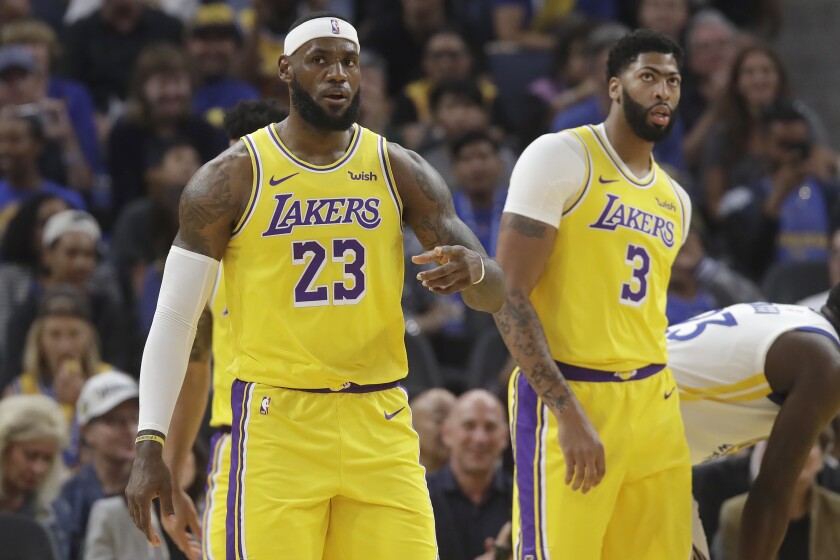 It is indisputable that some of the elite duos in NBA history ruled while playing for the Lakers.

Jerry West and Elgin Baylor reigned during the 1960s and into the early 1970s, the two of them the force that propelled the Lakers to seven appearances in the NBA Finals. Magic Johnson and Kareem Abdul-Jabbar were a supreme pair that won five championships together beginning in 1979. Shaquille O’Neal and Kobe Bryant wreaked havoc from 1996 to 2004, dominating along the way to three consecutive championships from 2000-2002.

Now the Lakers have another electric combination in LeBron James and Anthony Davis, performers many see as having the potential to go down in Lakers and NBA lore as another special twosome.

“The Lakers have had these incredible duos and the Lakers have been successful because of that,” Johnson said. “You can’t have one. You always got to have two. Any time we’ve had two, it has spelled championships, you know?

“The thing about it is it’s always a guard and big man. It’s always a guy that handles the ball and always a dominant player inside. I think that these two, LeBron and AD, have their opportunity of making Lakers history along with the other three pair of us that won.”

West was an all-encompassing guard and Baylor a smooth-gliding forward. Abdul-Jabbar had the most unstoppable shot in history with his sky hook and Johnson was a magician as the point guard. Bryant was unyielding as a shooting guard and O’Neal was a power down low.

Now, James remains a do-everything forward who may be the starting point guard this season and Davis is a 6-foot-10 forward who is able to play inside and out.

Golden State coach Steve Kerr grew up in Los Angeles as a Lakers fan and knows “the glitz and glamor” the Lakers brought to the game.

“You could see a big part of what the Lakers were trying to do was putting the stars together. Not that that was a novel concept, but most teams and most cities just couldn’t do that. It was just hard to do,” Kerr said. “But [Lakers owner] Jerry Buss was good at it and he found a way to keep doing it. So this makes sense, right? It’s a continuation of the blueprint and it’s such fondness to look at it from a historical standpoint but not so much fun to look at from a coaching standpoint of having to play against them.”

James, 34, is coming off his first season with the Lakers in which he played only 55 games because of a left groin injury and then stopped playing after they were eliminated from the playoffs.

Davis, 26, played in only 56 games last season with the New Orleans Pelicans because of injuries and eventually stopped playing toward the end of the season following a trade request.

He was still a tower of strength, averaging 25.9 points, 12.0 rebounds and 3.9 assists. He is a six-time All-Star, with three selections to the All-NBA team.

Davis sprained his right thumb during a preseason game against the Brooklyn Nets on Saturday in Shenzhen, China.

“I think it will work seamlessly with LeBron and AD because it’s a true inside-out or true perimeter guy and a big man that has perimeter skills and versatility,” said Mark Jackson, a former NBA star and coach who is now an analyst for ESPN.