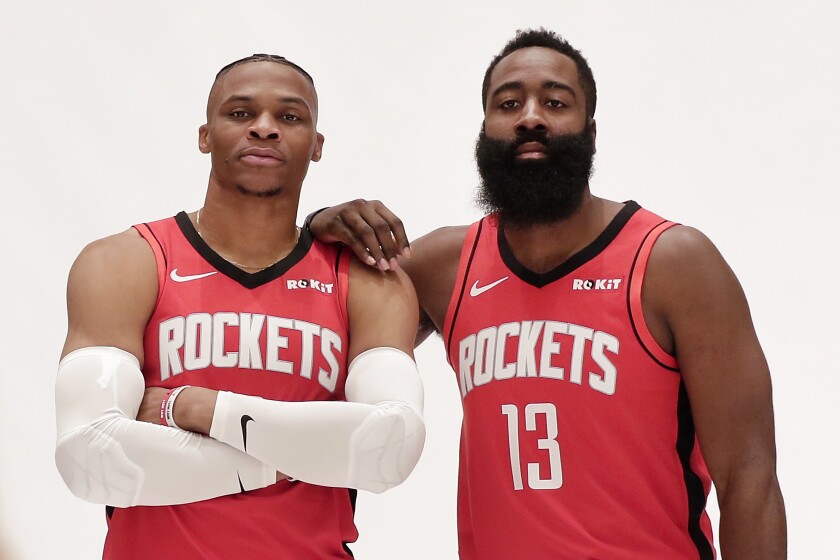 A look at how the Western Conference teams stack up in predicted order of finish:

James Harden gets a new backcourt partner in Westbrook, who doesn’t shoot nearly as well as Chris Paul but who is better suited to attack defenses with relentless pace. It’s the latest iteration in Houston’s biannual attempts to surround Harden with the right players, and it just might be their best attempt yet. Although Harden’s style has plenty of detractors, he’s been a regular-season monster, and that could get Houston to the top of a crowded pack of contenders.

The Clippers probably have the most talented roster in the West, but betting on them to win the conference title is a little scary. It’s unclear how much Leonard will play because of his load management and how quickly George recovers from surgeries on both shoulders this offseason. This team, though, has the depth, grit and talent to be favored almost every night.

This might be the time for the Jazz to vault from the fringes of contending to the foreground. Trading for Conley gives them a veteran point guard next to rising star Donovan Mitchell. Bogdanovic was one of the best shooters on the free-agent market, and Rudy Gobert is one of the NBA’s best defenders. The bench is probably the biggest question mark.

The Lakers have lost out on the Kawhi Leonard chase, and without him they were left to shop at the back end of free agency, like someone late to the super market when a big storm is feared to be coming in. Did they find the right wing shooter? Did they add enough in the backcourt? Who is going to play point guard? LeBron James and Davis might be good enough for those things to not matter so much.

The Nuggets are probably one trade from becoming the favorites in the West, and they’ve got the pieces to do it. Can Tim Connelly, the team’s president of basketball operations, bundle some of Denver’s young talent to land an All-Star like Bradley Beal? It’s a move they probably need to make, but if they don’t, they’ll have to settle for being the West’s deepest team.

Perhaps no team in the NBA lost more talent this summer than the Warriors, who also will be waiting on Klay Thompson to recover from a knee injury he sustained in the NBA Finals. Instead of losing Durant for nothing in free agency, they managed to land Russell in a swap. The fit isn’t perfect, but there are still pieces around Stephen Curry and Draymond Green that should keep Golden State in contention.

Portland’s core of Damian Lillard and C.J. McCollum took their team far, but they’ll enter this season — once again — as a team that will be underrated and overlooked. Portland took a swing this summer by dealing for Whiteside (it’s never a great sign when “enigmatic” is the adjective that proceeds your name), but the Trail Blazers’ ceiling is probably tied to the development of young players Zach Collins, Anfernee Simons and rookie Nassir Little.

The Spurs are largely the same team as they were last year, with Carroll and Lyles adding frontcourt depth. Thanks to the opportunities created by injuries, the Spurs are flush with young guard talent — Derrick White and Bryn Forbes were up to the challenge last year while Murray was out with a knee injury. With Murray and second-year guard Lonnie Walker IV healthy, the Spurs have plenty of options.

Freed from Davis’ trade demands, the Pelicans might have one of the best long-term projections. They’re loaded with draft picks, have the bulk of the Lakers’ young core and the most-hyped rookie, Williamson, since Davis. Ball and Jrue Holiday form a top defensive backcourt and the rookie class includes Jaxson Hayes and Nickeil Alexander-Walker. Veteran acquisitions like Redick and Favors have New Orleans thinking playoffs now.

This Kings core seems destined for a playoff appearance sooner rather than later, with De’Aaron Fox, Buddy Hield, Bogdan Bogdanovic and Marvin Bagley III all talented and young. Sacramento spent this summer adding veterans around them, keeping Harrison Barnes and adding players like Ariza, who know how to win. But is new coach Luke Walton the right choice to get the Kings into the top eight in the West?

The Thunder were forced to trade two of the best players to wear the uniform in a matter of weeks, but Sam Presti and Co. still have enough talent to compete — if that’s their intention. Paul, Gallinari and Gilgeous-Alexander were all top contributors on playoff teams last year. But some version of bottoming out seems to be in the future, and the Thunder could look to move the rest of their high-priced veteran talent.

In the big picture, last season was a success for the Mavericks, with Nowitzki getting the classy sendoff he deserved while the team built for life without him by handing the ball to rookie of the year Luca Doncic and by trading for the dynamic 7-foot-3 Porzingis. That’s the path for this team, though no one can be sure how healthy or productive Porzingis will be after sitting since February 2018. At least the Mavericks know Doncic is a rising star.

Karl-Anthony Towns is an All-Star and one of the best centers in the NBA, but in this conference, that’s not nearly enough. Minnesota went to work last year trying to bulk up its roster after dealing Jimmy Butler, and this summer the Timberwolves moved up in the draft to take Texas Tech guard Culver. But unless Andrew Wiggins figures out how to be a consistent factor, Minnesota is probably doomed to a finish near the bottom of the Western Conference.

The good news is the team has a star. Devin Booker is a scoring machine with the tools to be a good defender. But to this point, for all of Booker’s strengths and the drafting of 7-footer Deandre Ayton, none of it has led to winning. Monty Williams was hired as coach and will try to make sense of it all, though the Warren trade had some people puzzled. There’s still a long way to go.

The Grit and Grind era is officially over as the Grizzlies turn the franchise over to rookie point guard Morant. He’ll have young big men like rookie Brandon Clarke and Jaren Jackson Jr., the fourth overall draft pick last year, to grow alongside as the team tries to rebuild. Memphis has a decision to make with Iguodala, whom they acquired from Golden State. They’ll try to trade him, but a buyout seems inevitable.