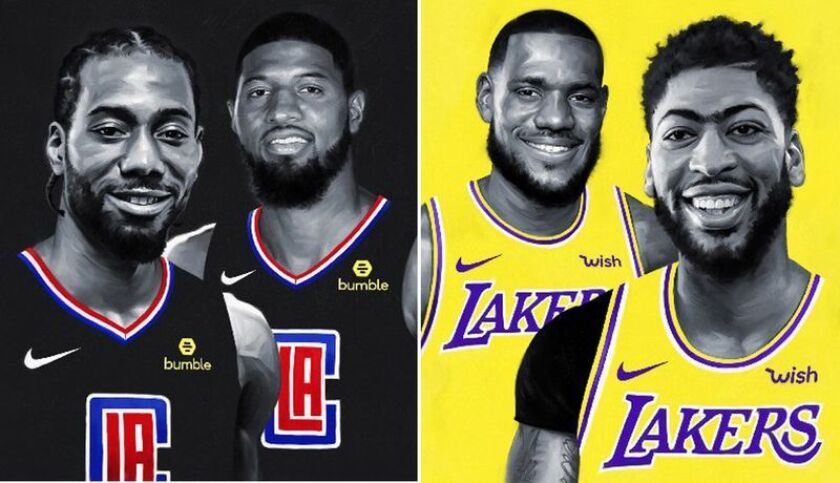 NBA preview: The new Fight for L.A. is the biggest question

The five biggest questions awaiting the NBA as it heads into the 2019-20 season:

1. Who will win the battle for Los Angeles?

In any other offseason, a player of Anthony Davis’ caliber becoming the newest Lakers star would be the story of the summer. But that trade came before free agency, a period when so much happened and it happened so quickly. Of all those moves — Kyrie Irving and Kevin Durant going to Brooklyn, Kemba Walker heading to Boston, Russell Westbrook joining James Harden in Houston — the Clippers getting Paul George and Kawhi Leonard on the same night topped them all. With four of the best players in the NBA all in the same town, the basketball will be hotter in Los Angeles than anywhere else. The Clippers may never be able to catch the Lakers in popularity, but they do have a real chance to spoil the first year of Davis’ partnership with LeBron James. Conversely, with a pair like James and Davis, the Lakers can ruin the Clippers’ best title chances ever.

Last year’s most valuable player got the Milwaukee Bucks to the edge of the NBA Finals, at times looking unguardable even though he’s still not a credible outside shooter. In fact, it might’ve been the only area in which he didn’t get better last season. Teams shouldn’t get used to it. Antetokounmpo has taken steps toward being a complete player each season, and the only thing holding him back is his perimeter shooting. With the way people in the Bucks’ organization talk about his work ethic, it shouldn’t be shocking when his perimeter shot falls more frequently. Even if it doesn’t happen now, he’s good enough to lead the Bucks to the Finals and maybe a championship.

3. If the Lakers are in the playoffs, who’s out?

The Lakers’ trade for Davis means it would take either a bunch of injuries or a parade of catastrophic events to keep them from returning to the playoffs for the first time since 2013. That means at least one of the teams from last year’s playoff field won’t be in the top eight. The most logical team to fade would be the Oklahoma City Thunder, who lost George and Westbrook. The Thunder still added major pieces in Chris Paul, Shai Gilgeous-Alexander and Danilo Gallinari and could be in the mix. So could last year’s surprise Sacramento Kings, the Zion Williamson-led New Or-leans Pelicans and the Dallas Mavericks thanks to Luka Doncic and Kristaps Porzingis. Some team won’t make this field and yet probably expects that it will.

4. Who is the next star to be traded?

The NBA hasn’t stopped reeling from all the player movement this summer, and it’d be silly to think the changes are over. The Thunder’s playoff chances (and desires) are tied to Paul and his future. With three years and $120 million left on his contract, finding a trade partner for him could be tricky — though the Thunder probably will be trying. The Washington Wizards have a bottom-out rebuild staring them in the face since Bradley Beal is the kind of star who could net them a nice return. If that’s where the supply starts, expect Miami, which needs help for Jimmy Butler, and Denver, with an abundance of good players, to provide the demand.

5. Will the familiar faces be the same?

It’ll be awesome to see Porzingis back on the court as well as Klay Thompson and John Wall. And, eventually, Durant. All could be difference-makers for their teams if they meet the expectations they’ve set for themselves with their past play. But one thing we do know about injuries is that they can change players. Porzingis? There’s no guarantee the 7-foot-3 forward’s agility and skills haven’t eroded after missing the last season-plus. Wall? He might not be as quick as he used to be. The Warriors are counting on Thompson’s knee to fully heal and not affect his abilities. The Nets are betting the same, long term, on Durant. The hope is that these guys won’t just look the same as before — they’ll be able to produce the same too.