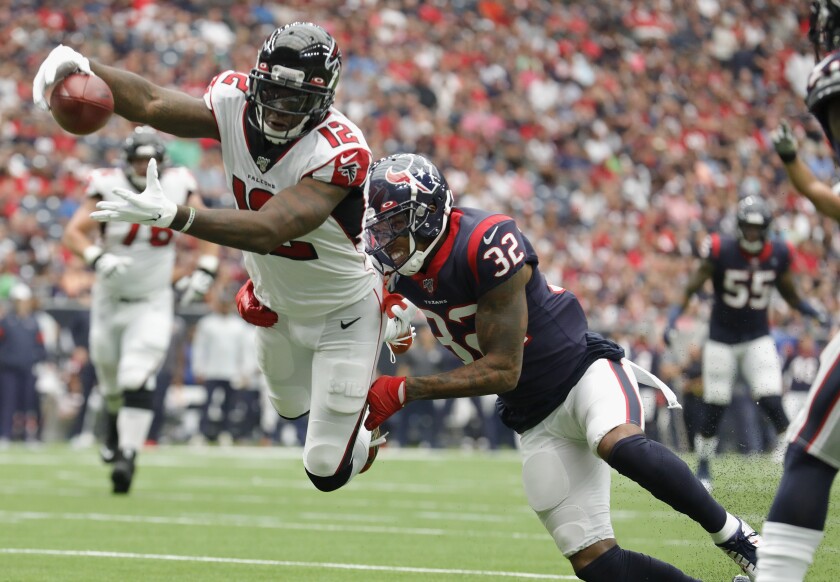 The Atlanta Falcons have traded receiver Mohamed Sanu to the New England Patriots for a second-round draft pick in 2020, according to a person within the NFL.

The person spoke to the Associated Press on condition of anonymity because the teams were still completing Tuesday’s deal.

The move signaled the Falcons are already looking to the future just seven weeks into the season. Atlanta (1-6) is mired in a five-game losing streak and off to its worst start since 2007.

The 30-year-old Sanu heads to the reigning Super Bowl champion Patriots (7-0). He gives quarterback Tom Brady another target in a dynamic offense that leads the league in scoring at nearly 32 points a game.

Sanu joins a receiving corps that includes Super Bowl MVP Julian Edelman, Josh Gordon, Phillip Dorsett, Jakobi Meyers and Gunner Olszewski. The Patriots also have N’Keal Harry, a first-round pick in this year’s draft who went on injured reserve after hurting an ankle during training camp. He is eligible to return to the roster in Week 9.

Sanu has 33 receptions for 313 yards and one touchdown this season, his fourth with the Falcons after spending his first four years with the Cincinnati Bengals.

He had a career-high 67 catches for the Falcons in 2017 and followed up with 66 catches for a career-best 838 yards last season.

Even before the trade, Sanu seemed unlikely to remain with the Falcons beyond this season. He has one year left on his contract, while the Falcons are facing some tough salary cap decisions and already have Julio Jones and Calvin Ridley to anchor the receiving corps.

The Denver Broncos have traded veteran wide receiver Emmanuel Sanders to the San Francisco 49ers, a person with knowledge of the deal told the Associated Press.

The person, who spoke on the condition of anonymity because the teams hadn’t announced the trade, confirmed the Broncos sent a fifth-round pick in next year’s draft along with Sanders to the 49ers for third- and fourth-round picks in 2020.

Sanders caught 30 passes for 367 yards and two touchdowns this season as he made a successful comeback from a torn left Achilles tendon and tight-rope surgery on his right ankle.

The Broncos (2-5) became sellers ahead of the league’s trade deadline for the second straight season after their 30-6 blowout loss to the Kansas City Chiefs last week. Last year, the Broncos traded veteran receiver Demaryius Thomas to the Texans.