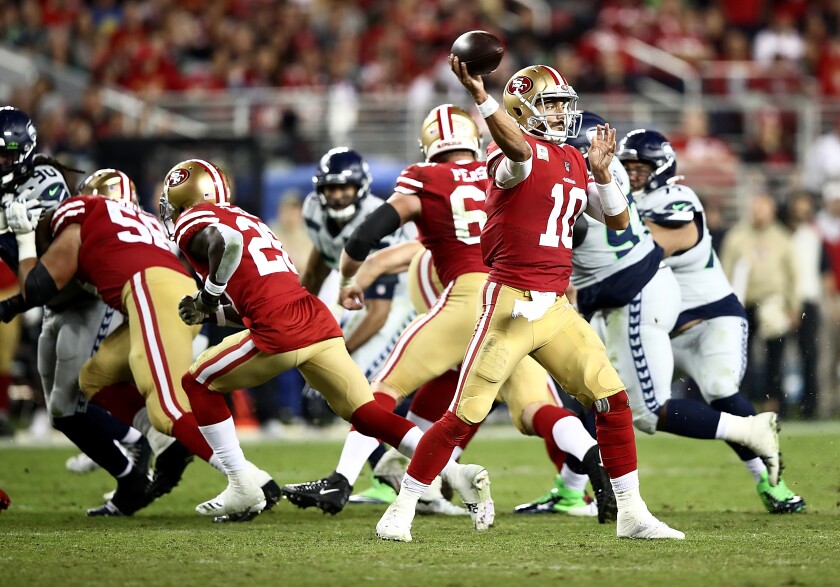 The best NFL teams have the need for seed.

Sure, it’s great to get to the postseason. But the teams that truly have a chance to hoist the Lombardi Trophy are the top two seeds in each conference, the ones awarded a week off before their playoffs begin.

The Rams and New England Patriots were both No. 2 seeds when they met in the Super Bowl at the end of last season, but before that, nine of the 10 participants in the previous five Super Bowls were No. 1 seeds. The only exception was the 2016 Atlanta Falcons, seeded second.

In other words, even though the current playoff picture is relatively clear heading into the final Sunday of the season, the jostling within those ranks matters quite a bit.

So when San Francisco plays at Seattle on Sunday night, the outcome is critical even though both teams already have qualified for the playoffs. If the 49ers win, they’re the NFC’s No. 1 seed and get a week off before hosting a divisional game. If they lose, they have to open on the road a fifth-seeded wild card.

The route is a bit more complex for the Seahawks. Should they win, they would clinch the NFC West and be guaranteed a home playoff game. But to secure the top seed, they would need a win, plus Week 17 losses by New Orleans and Green Bay.

The Seahawks have won three NFC title games on their home field, and their fans — affectionally known as the 12s — make CenturyLink Field one of the loudest sports venues on Earth.

“They’re going to be frickin’ flying off the top of the roof,” Seahawks coach Pete Carroll said this week in a conference call with Bay Area reporters, when asked about the fans.

That scene will be replicated all over the league, as the vast majority of playoff-bound teams have something at stake in their finales.

The Packers can secure a first-round bye with a win over Detroit or a New Orleans loss at Carolina. Green Bay has the conference-record tiebreaker over the Saints.

“This is a playoff game for us,” Packers coach Matt LaFleur said. “No doubt about it.”

As for the Minnesota Vikings, their loss to Green Bay on Monday night means they have to hit the road as the No. 6 seed. They haven’t won a road playoff game since 2004.

In the AFC, Baltimore is locked in too, but at the other end of the spectrum. The 13-2 Ravens are the only team entering the final week with home-field advantage in pocket. Should they win Sunday against Pittsburgh, they would finish with the best record in club history.

The way the Ravens see it, a gaudy regular-season record isn’t worth putting star players at risk. Quarterback Lamar Jackson will rest Sunday, as will some other key starters.

“Yeah, he wants to play, I saw the press conference,” Baltimore coach John Harbaugh told reporters with a smile. “I appreciate it. But one thing about Lamar, and all of our guys, they’ll be 100% behind the guys who are playing. And they’ll be doing everything they can do to get those guys prepared to play in this game and win the football game.”

The 8-7 Steelers aren’t in the playoffs, but they aren’t eliminated, either. Their clearest path to getting in: a win over Baltimore, and a Tennessee loss to Houston.

New England can secure a first-round bye as the AFC’s second seed by beating Miami, or with a Kansas City loss to the Chargers.

Conversely, the Chiefs can grab that coveted No. 2 seed with a win and a Patriots loss to the Dolphins.

The other AFC team locked into its spot is Buffalo at No. 5, the Bills’ bid for an AFC East title evaporating with last week’s loss to the Patriots.

The 7-8 Oakland Raiders have the more complicated path to the postseason, but still an achievable one. They need to win at Denver and get victories by Baltimore, Houston and Indianapolis (at Jacksonville), as well as a win by one of the following: Chicago, Detroit, Kansas City or New England.

Perhaps the hardest part of all that? The Raiders winning their own game.