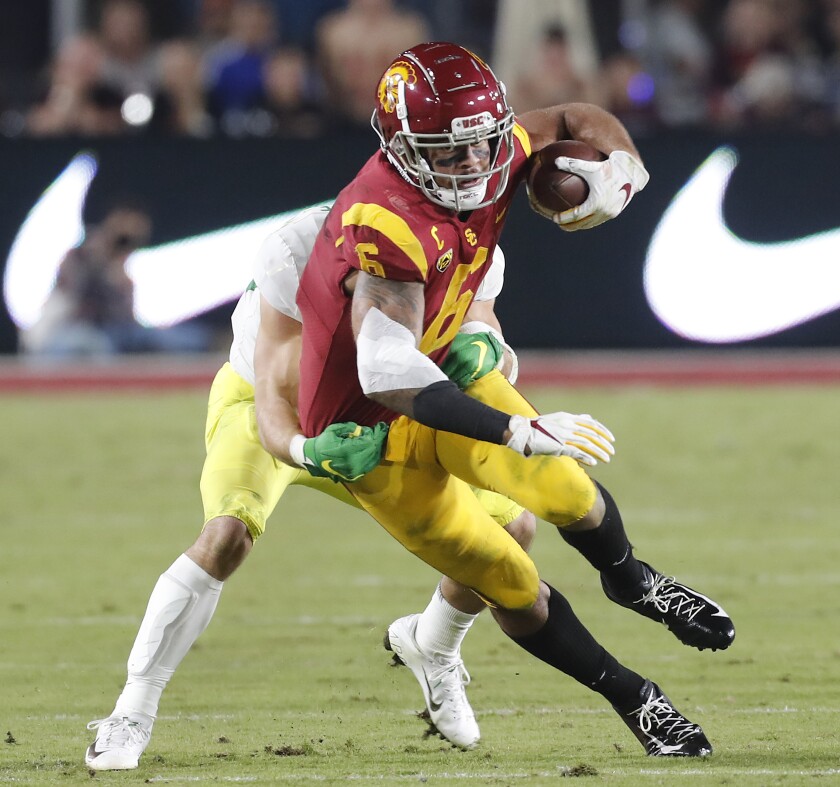 The last time USC played UCLA at the Coliseum, NFL scouts were like birds on a wire. Twenty of them lined the second row of the press box, scribbling notes on their pads, holding binoculars to their eyes, and documenting everything they could about opposing quarterbacks Sam Darnold and Josh Rosen.

But when the schools meet again Saturday on the same field, the league will take little more than a passing interest.

As of Thursday afternoon, only five NFL scouts were credentialed for the game, although USC was waiting to hear from two more.

It’s a sign of the times for two programs with a fair share of young talent, but only a handful of draft-eligible players who truly intrigue pro evaluators.

For the last 15 years, heading into this crosstown rivalry, The Times has collected the observations of NFL team scouts on the players from UCLA and USC likely to wind up playing on Sundays next fall.

Typically, NFL scouts are secretive about their evaluations; it’s a highly competitive business, and information is guarded closely. But two talent evaluators from NFL teams — identified as Scouts 1 and 2 — agreed to open their notebooks and share thoughts on strengths, weaknesses, and potential draft range of some of these players.

“I think it’s just one of those years,” Scout 1 said. “USC has a lot of underclassmen talent, especially next year’s [draft] class. I love Clay Helton as a coach, and he’s great for us as scouts. Whoever the coach is next year, if it’s not Clay, is not walking into a bare cupboard. They’ve got some really nice talent if they keep them in school.”

Scout 2 is not as convinced the clouds will clear as quickly.

“I think it’s down across the board,” he said. “The Pac-12 is down. UCLA and USC are down. High school football’s down. It’s a lot different than it used to be. A lot of the good players are going to the South. It used to be that players who left California were going to Washington and Oregon. But now some of the best ones are going to Alabama and places like that.”

Regardless, there are players in this year’s crosstown showdown who will get chances with NFL teams next season. Most intriguing to these two pro scouts:

OT Austin Jackson, USC: At 6 feet 6 and 310 pounds, the junior is a two-year starter at left tackle. Both scouts really like his feet and fluidity. Scout 1 sees him as a third-rounder if he were to enter next year’s draft, but thinks he should stay in school to mature physically. Scout 2 projects him as a first- or second-rounder right away, even though Jackson is a raw talent.

WR Michael Pittman, USC: The junior receiver is third in the nation in catches and yards receiving, and at 6-4 and 220 pounds has an NFL build. Scout 1 likes his understanding of spacing on the field and ability to go up and grab contested throws, but wonders about his speed. Scout 2 sees him as a third-rounder, while Scout 1 sees him going in the fourth or fifth.

RB Josh Kelley, UCLA: Both scouts see Kelley as a tough inside runner with good vision and ability to finish runs. Speed is the issue. Both project him as a late-round pick, as long as he runs well for teams in the spring. Otherwise, he’s most likely a free agent.

DE Christian Rector, USC: Slowed by injuries this season, Rector will get a look by NFL teams. He’s better at stopping the run than rushing the passer, but Scout 1 says he needs to get stronger to really set the edge as an NFL base end. Both scouts see him as borderline draftable, and perhaps a priority free agent.

LB Krys Barnes, UCLA: It helps guys like Barnes that UCLA has had some unheralded linebackers such as Kenny Young and Jayon Brown succeed in the NFL. The two scouts see Barnes as average across the board, but instinctive and hard-working. They agree he’s a late-round pick or free agent.

CB Darnay Holmes, UCLA: Holmes has battled injuries and inconsistency this season, but he interests the evaluators. Scout 1 sees him as a nickel back in the NFL, but as someone who should stay in school. Scout 2 likes his quick-twitch athleticism and thinks he could go in the third or fourth round.

LB John Houston, USC: Houston leads the Trojans in tackles and in many ways is the quarterback of that defense. Scout 1 sees him as a free agent, someone who hustles and is good laterally but not a “take-on guy” who blows up ball carriers. Missed tackles are a problem. Scout 2 sees him as a late-round pick.

G Alijah Vera-Tucker, USC: Strong and physical at the point of attack, Vera-Tucker is an interesting down-the-road prospect, a redshirt sophomore who will get a hard look by evaluators next season. Scout 1: “He’s more of a mauling, get-his-hands-on-you-and-control-you kind of guard. The more he gets in space, the less effective he is.”

WR Tyler Vaughns, USC: Like Vera-Tucker, Vaughns is a talent who probably could use more time in school. Scout 1: “He’s been productive since the day he stepped on campus. The biggest knock on him is his speed, but he has a great feel for leverage and can create separation.”