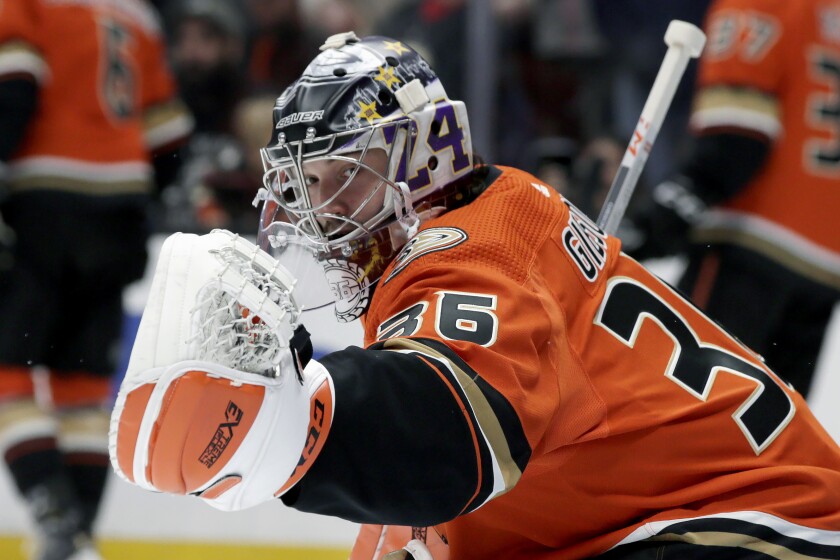 So it wasn’t lifelong fandom that led Gibson on Friday to wear a new mask that honored Bryant, Bryant’s daughter Gianna, and the seven other people who died in a helicopter crash last Sunday in Calabasas. Gibson was motivated by respect and sorrow and something bigger, and his gesture stands as a touching affirmation of Bryant’s rare and powerful cross-sport appeal.

“You ask any athlete, they looked up to him for one thing or another, whether it was what he did on the court or off the court or just being a family man. He was a role model for so many people,” Gibson said after wearing the mask in a 4-3 loss to Tampa Bay at Honda Center. “It’s obviously a tragedy but this is something little to try and do. Show a little love, I guess.”

The portion that protects the back of Gibson’s head has a silhouette of Bryant and Gianna (nicknamed “Gigi”) and the first initial and last names of John, Keri and Alyssa Altobelli, Christina Mauser, Sarah and Payton Chester, and Ara Zobayan. All lived and/or worked in Orange County.

“I’m fortunate enough to be able to wear something where you can design it. I’ve never been too into it, but that’s something that’s special, not only [for] the Bryant family but for everybody,” said Gibson, who plans to use the mask for a while and might eventually auction it for charity.

Bryant occasionally attended Kings games and wore a replica of a Wayne Gretzky Edmonton Oilers jersey before a Lakers playoff game against Oklahoma City in 2012. (The Lakers scored 99 points in that game.)

Bryant also appeared in a video the Kings produced in an effort to woo free agent Brad Richards in 2011. Richards told Toronto radio station TSN 1050 last week the video contained scenes of the Lakers’ successes with a personal appeal from Bryant. Richards signed with the New York Rangers but was impressed with Bryant’s presence. “They tried to make it interesting,” Richards said.

NHL teams in the United States and Canada honored Bryant with moments of silence and video tributes. The Kings’ ceremony was especially poignant, as Hall of Fame announcer Bob Miller noted the longstanding links between the Kings and Lakers through the ownership of Jack Kent Cooke and Jerry Buss and, now, their shared tenancy at Staples Center. Players wore decals on their helmets with the names Kobe and Gigi and Bryant’s numbers.

The NBA’s appeal is built around players’ personalities, but hockey ethos prizes the team above the individual. It’s an admirable philosophy, but it also means the NHL has fewer identifiable and marketable stars than the NBA does. Bryant’s “Mamba mentality” transcended his sport, and NHL players recognized that.

New Jersey Devils defenseman P.K. Subban, one of the league’s few black players, had asked Bryant to mentor him several years ago. They exchanged texts about training, postgame routines and mental preparation. “When I dream about playing in big games and wanting to make a difference, all of that comes from him,” Subban told reporters last week.

Washington Capitals winger Alexander Ovechkin, proud owner of a signed Bryant jersey and signed shoes, wears No. 8 but on Wednesday wore 24 during warmups. He planned to auction that jersey and direct the proceeds to the Kobe and Vanessa Bryant Family Foundation. “He was a legend in the basketball world and the whole world. It’s tough,” Ovechkin said.

San Jose forward Evander Kane used his stick to convey his condolences. He wrote “RIP Kobe and Gigi,” on one side and “#Mamba and Mambacita” on the other, a nod to the Bryants’ father-daughter bond. Kane’s unborn daughter died last year.

Ducks coach Dallas Eakins wholeheartedly approved of Gibson’s mask. “I thought it was a great thing to do,” Eakins said. “That’s just a terrible tragedy for all of those families and the people that were on that helicopter and to honor an individual that’s had just such an amazing impact on Southern California, and now you see basically on the whole world, I think it was a small gesture on Gibby’s part and our organization’s part. I think we were just trying to show how much respect we have for that family.”

And in that, they were not alone.

The Chicago Blackhawks went into the All-Star break and their bye week with five wins in six games, a surge that included winger Patrick Kane earning his 1,000th NHL point. The Buffalo, N.Y., native became the youngest American-born player (31 years and 61 days old) to record 1,000 NHL points, and he did it in 953 games. Through Friday’s action, Kane had 25 goals and 63 points in 51 games, which projected to 102 points.

The Blackhawks aren’t prohibitively far out of a playoff spot but they’d have to pass a bunch of teams to finish third in the Central Division or grab a wild card spot. That won’t be easy.

“I think it will be interesting,” Kane said last weekend. “I think probably what’s going to happen is that the team’s going to decide how we do over the next few weeks and leading up to the trade deadline.

“In February, we play a lot of road games. We’ve played pretty well on the road this year. Hopefully, that can stay the same throughout February and we can make a push. We play a lot of home games in March, so it would be nice to be in a good position going into the month of March.”

Skillful forward Tomas Hertl, who teamed with Kings center Anze Kopitar to excel at the All-Star game, will be lost for the rest of San Jose’s season after he tore the anterior cruciate ligament and medial collateral ligament in his left knee Wednesday. Hertl had 16 goals and 36 points for the Sharks, who are sinking slowly in the West.

Losing Hertl pretty much ends the Sharks’ playoff hopes and make them sellers at the Feb. 24 trade deadline. They should get lots of calls about defenseman Brenden Dillon, who can become an unrestricted free agent July 1.