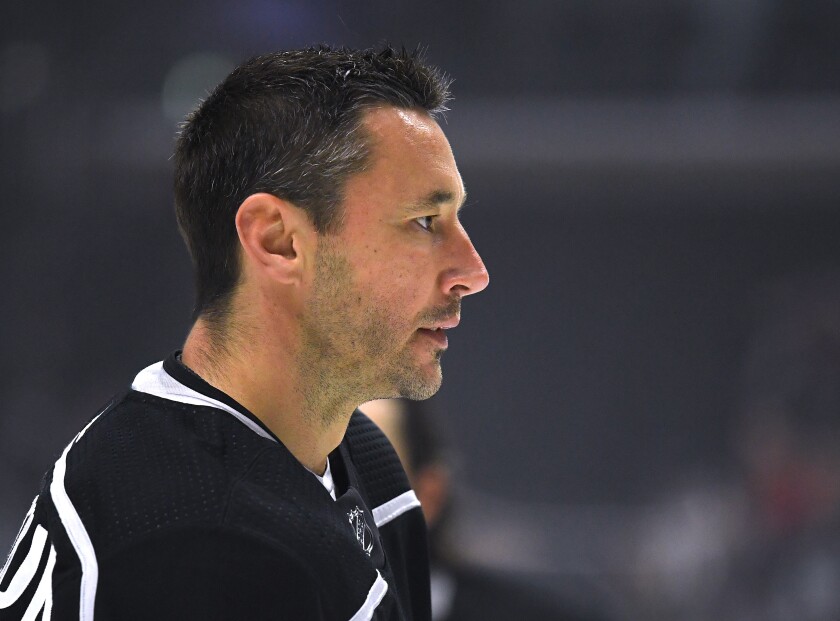 The only people who thought Ilya Kovalchuk would be a good fit with the Kings were general manager Rob Blake, team president Luc Robitaille and Kovalchuk, and it’s tough to blame the Russian winger for loving the only team that was suckered into signing him for three years and $18.75 million when he was 35 and had been out of the NHL for five seasons.

It was no surprise he fell out of favor last season, but the turmoil of firing John Stevens and hiring an overwhelmed Willie Desjardins left a shred of hope Kovalchuk might rebound this season under new coach Todd McLellan. It’s also no surprise that he hasn’t rebounded and appears to be on his way out the door, leaving behind a $6.2-million salary cap hit this season and next even if the Kings buy him out.

Signing Kovalchuk was a mistake on many levels, starting with Blake and Robitaille believing last season’s team could contend and that Kovalchuk would help by producing goals in a league that’s much faster than when he left. He’s a liability defensively and hasn’t scored enough to make that shortcoming tolerable. If Blake and Robitaille couldn’t immediately realize the Kings needed a complete tear-down, can the rest of their decisions be trusted?

To be fair, they inherited many problems. Former GM Dean Lombardi slowed the replenishment of high-end young talent when he traded away first-round draft picks in a failed attempt to prop up a team that aged fast after its 2012 and 2014 Stanley Cup triumphs. He rewarded players with big contracts and no-move clauses, making them untradeable as they faded. That’s a challenge now. But Blake and Robitaille made things worse when they took on Kovalchuk’s contract and limited their financial maneuvering room.

When Lombardi arrived in 2006 he had a few young players with potential and brought in veterans to buy time for the kids to develop. Blake is doing something similar by allowing many top prospects to grow before he subjects them to NHL pressure. That’s fine, but he can’t afford to be wrong about them. Lombardi fired two coaches before he hired Darryl Sutter; Blake also is on his third coach, McLellan. Blake seems to have gotten that right, at least. McLellan is setting high standards and hasn’t hesitated to bench players who don’t work hard. But this remains a long and tedious rebuild, one that Blake and Robitaille prolonged when they created a lose-lose situation with Kovalchuk.

No rant that begins with “You people” can possibly end well. In using that phrase last week to complain that he saw few people wearing poppies on their lapels to honor veterans, bombastic Hockey Night in Canada commentator Don Cherry set himself apart from and above those he spoke about.

He never specified that he meant immigrants, but in saying “they come here …. you love our way of life, you love our milk and honey,” his meaning was clear. It also fit his decades-long pattern of maligning French Canadians, Swedes and European players in general. Cherry later conceded that he should have said “everybody” instead of “you people,” but he made his living by talking on TV and had to know that words have the power to hurt others. He inflicted too much needless hurt. His dismissal by Sportsnet was long overdue.

Cherry’s vision of hockey is stuck in the 1970s. His glorification of fighting became horrifying as information emerged about former players struggling with traumatic brain injuries. For years, listeners and bosses cringed at Cherry’s blustering but indulged him because he wore funny suits and behaved like an eccentric uncle. No more. He provided enough reasons to take his microphone away.

Hockey dynasties rise and fall, but seeing Detroit near the bottom of the standings is still a jolt to those who remember their 25-season playoff streak and the formidable teams they assembled to win the Stanley Cup in 1997, 1998, 2002 and 2008. They missed the playoffs the last three seasons and will miss out again this season, and they seemed to hit rock bottom when they went 0-7-1 during mid-to-late October and lost four straight to start November. “It was a tough stretch there for 10, 15 games and we didn’t like the way we were playing. We didn’t feel like we were hard enough to play against,” forward Dylan Larkin said last week.

Solid special-teams play and good goaltending from Jonathan Bernier helped them defeat Boston, Vegas and the Ducks in succession and boosted their confidence. “Lately, if we get down a goal or two, we’re not panicking, we’re not playing frantic or anything like that. We’re still playing with the same habits, getting the puck in deep and forechecking,” defenseman Dennis Cholowski said after his overtime goal completed a comeback at Anaheim on Tuesday. “That’s good to see.”

A return to glory is still a long way off for the wearers of the classic winged wheel and their far-flung fan base, but they’re showing hints of progress. “We’ve got a whole bunch of young guys in really, really important roles,” coach Jeff Blashill said, “and we as coaches have got to make sure that they’re continuing to get better as players, and I think they are.”

John Chayka was the NHL’s youngest general manager, at 26, when Arizona hired him three years ago. He’ll get a chance to grow old in the job after getting an unspecified long-term extension last week. The Coyotes barely missed a wild-card playoff berth last season and are in the mix this season. They pulled off a noteworthy feat when they beat the last two Cup champions (Washington and St. Louis) on the road in shootouts on consecutive nights last week.

The Florida Panthers were wise to hire retired goaltender Roberto Luongo as special advisor to general manager Dale Tallon. The only potential downside is that Luongo’s new duties might keep him too busy to continue his hilarious tweets as @strombone1.