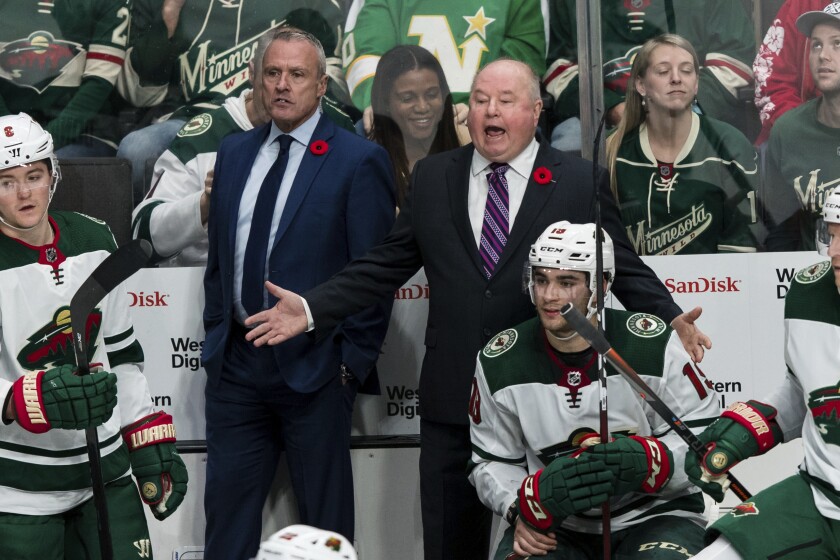 In his 14th season as an NHL coach and third stop on the coaches’ carousel, Bruce Boudreau isn’t naive.

His team missed the playoffs last season and is underachieving this season, and he’s nearing the end of a contract that hasn’t been extended by his new boss, general manager Bill Guerin. Speculation that Boudreau might be fired began well before the Minnesota Wild’s current Western trip, which will end with a game against the Kings on Tuesday at Staples Center. “It’s going to be out there,” Boudreau said. “It’s a winning league. If you don’t win, bad things happen.”

Boudreau, nicknamed “Gabby” for his amiable personality, is trying to stay upbeat while fighting an uphill battle. “I can’t control anything that’s happening, so I just go on. If I worried about that every day, I’d be a basket case,” said Boudreau, who previously coached the Ducks to four Pacific division titles in four-plus seasons but was fired after they lost in the first round of the 2016 playoffs. “So you just go, ‘Whatever happens, happens,’ and I think we’re capable of doing better than where we are right now and hopefully we do.”

He has a mishmash of a roster. The Wild can score but give up too many goals. Their salary cap space is limited by the hefty contracts of forward Zach Parise and defenseman Ryan Suter, who are in their mid-30s and carry a cap hit of $7.5 million each through 2024-25. Their stars are old and the kids haven’t made a significant impact yet. Players hoped this trip would be a turning point, and they began on an encouraging note with a 4-2 win over the Ducks at Anaheim. But they followed that with a scrambly 6-5 loss at San Jose before a 4-3 win Saturday against Arizona that still leaves them near the bottom of the Western Conference.

Meanwhile, Boudreau hopes for better days and tries to ignore the outside noise. “I love what I do. I’m just happy to be here,” he said. How much longer he will be able to say that is up for debate.

Teemu Selanne is as skilled at charming people as he was at scoring goals, which is saying a lot because he lit the lamp 684 times in 21 NHL seasons. The Finnish winger, who won the Stanley Cup with the Ducks in 2007 and was inducted into the Hockey Hall of Fame in 2017 with former line mate Paul Kariya, is using his charisma these days to promote his new book, “Teemu Selanne: My Life.”

It’s an updated English version of a book published in Finnish in 2014. “There’s more stories in there based on what happened here,” he said while greeting fans at a book signing in Anaheim last week. “I wanted this book to be honest and open and tell about my life and the ups and downs that have affected me as a person and a player.

“I’m happy with it. We always talk about fun stuff, but, of course, life has ups and downs and I think it’s important that if you do the book, you do it the right way. I think it looks like me.”

It’s not as flashy as he was, but it includes interesting observations from friends and family. His parents separated when he was young, and his older brother got into trouble with drugs. Teemu didn’t like school and became a daredevil on his motorcycle. “It’s a miracle that nothing serious happened, he must have had all kind of guardian angels watching over him, and the stars aligning just perfectly,” his father, Ilmari, said. He still enjoys himself, but he gave up race car driving. “I think it’s great you can live almost a new life, with flashbacks about certain situations,” Selanne said of revising the book. “You appreciate things.”

The Finnish edition caused a stir because Selanne criticized Ducks captain Ryan Getzlaf for not backing him when then-coach Boudreau cut Selanne’s ice time. That made it into the new edition. “For me, being a young leader in the league, maybe I should have stuck up for him. Maybe I shouldn’t have,” Getzlaf said recently. “It was a learning experience for me too, and we’ve never had any animosity at all.” It’s tough to be mad at Selanne, as a person or as an author.

Forward Robby Fabbri, traded by the St. Louis Blues to Detroit last week for Jacob de la Rose, scored two goals in his Red Wings debut Friday and matched the number he scored in 32 games last season. Both of his goals Friday came on the power play, and they fueled Detroit’s 4-2 win over the Boston Bruins.

The Red Wings were the last NHL team to reach double digits in points (11, on a 5-12-1 record). This will be a long season, but Fabbri could provide a few bright moments. He was drafted 21st in 2014 but his progress was slowed by repeated injuries and his ice time dwindled with St. Louis. He should play a lot for the Red Wings, who rank last in scoring at an average of 2.17 goals per game.

Commissioner Gary Bettman, in Stockholm last week for two games between the Buffalo Sabres and Tampa Bay Lightning, announced that the Bruins and Predators will open the 2020-21 season in the Czech Republic and the Avalanche and Blue Jackets will play two games in Finland. He also repeated his opposition to letting NHL players participate in the 2022 Beijing Olympics, calling the break in the schedule “a challenge” and “incredibly disruptive.”

More disruptive than the three lockouts he imposed? More disruptive than flying thousands of miles for two games? Players are eager to return to the Olympics after being kept out of the 2018 Pyeongchang Games, and Bettman surely will leverage that to get some kind of concession in another area. He hasn’t ruled out staging more games in China but won’t let players go to the Beijing Olympics because the NHL doesn’t directly profit off the Games. Skipping another Olympic tournament would be a mistake for a league seeking global growth.