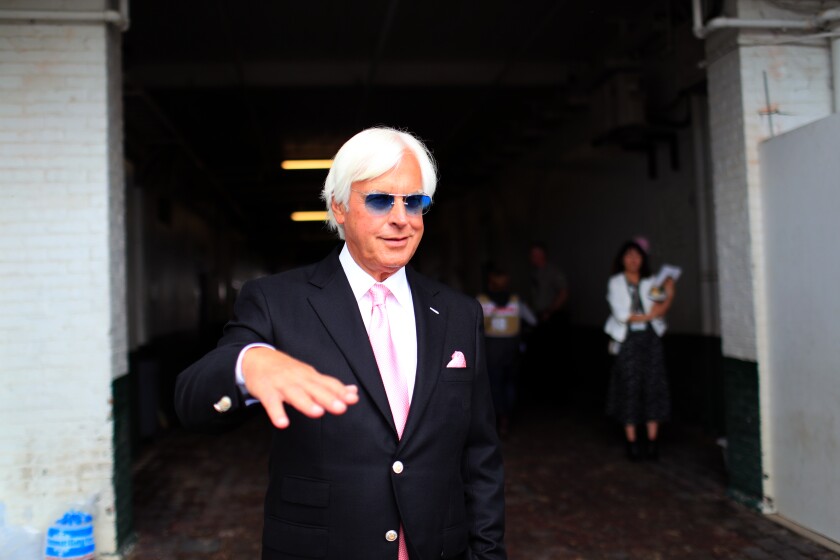 Trainer Bob Baffert, no stranger to horse racing’s biggest stage, again finds himself near the top of the Kentucky Derby discussion when Nadal took an impressive victory in the Grade 2 $200,000 San Vicente Stakes on Sunday at Santa Anita.

Immediately afterward on TVG, Baffert did the near unthinkable and referenced a Kentucky Derby winner and a Triple Crown winner when discussing Nadal.

“Silver Charm, he did it like that in the San Vicente,” Baffert said in comparison to the 1997 Kentucky Derby and Preakness Stakes winner, before mentioning the 2018 Triple Crown winner. “We’re basically running him into shape like I did with Justify. It’s a good race for him.”

Baffert is clearly impressed with the 3-year-old colt, who was a $700,000 purchase in March.

Nadal broke near the lead and never looked uncomfortable under a confident ride from Joel Rosario. Ginobili poked his head in front during the stretch run but Nadal proved the best.

“I didn’t do much with him,” Baffert said. “I figured he’d gut it out on his own. Ginobili passed him and I thought he was beat but those good ones, they find a way to win and that’s what he did.”

“He broke sharp and he handled the pressure from the outside,” Rosario said. “I was never worried about it. My horse was moving very well and I was confident because I could feel I had a lot of horse under me. He was very impressive. He ran very fast [Sunday] and he runs like he’ll like two turns, but you never know until they do it.”

A disappointing fourth was Storm The Court, 2-year-old male Eclipse Award winner who was victorious in the Breeders’ Cup Juvenile. He was in a good stalking position but was never able to make up ground on the leaders in the stretch.

What makes this race different is it carries with it no Kentucky Derby points because it is only seven furlongs. Most trainers value races closer to the Kentucky Derby in which you can earn more points.

“If they can’t get their points in the last race, which is the most important race, they don’t belong in the Derby,” Baffert said. “I’ve always thought that. He’s going to have to earn his way.”

Baffert plans to send Nadal to the Rebel Stakes at Oaklawn Park in Arkansas on March 14. This is the same path Baffert used on American Pharoah when he won the 2015 Triple Crown.

Nadal’s next race will be only his third. If he does well and qualifies for the Derby he might not run again until the first Saturday in May. In other words, the same number of races Justify had when he went to Louisville, Ky.