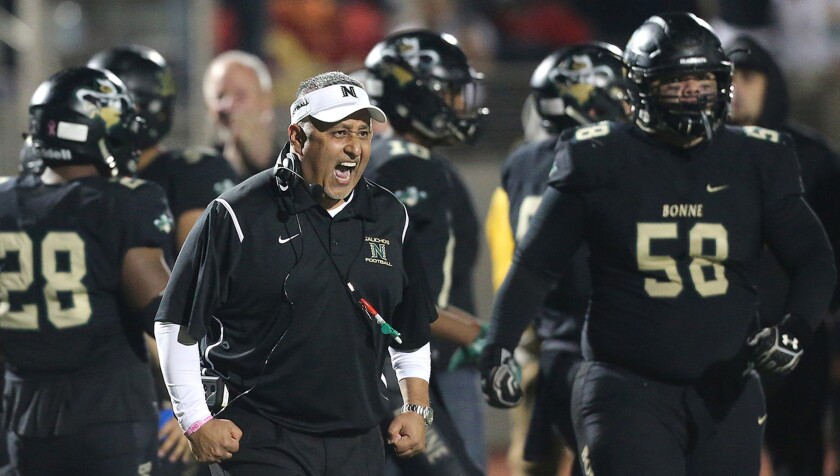 A nine-month dispute between highly successful Harbor City Narbonne High football coach Manuel Douglas and the Los Angeles Unified School District has come to an end, with Douglas tendering his resignation, according to a statement from the LAUSD on Friday. He’s a finalist to be head coach at Playa del Rey St. Bernard.

Douglas was reassigned at the end of May when the LAUSD launched an investigation into allegations of academic misconduct at the school. Two staff members were also reassigned. He did not coach last season and was assigned to his home while the district’s Office of Inspector General continued an investigation. LAUSD has refused to turn over documents requested by The Times about the investigation.

Douglas won eight City titles and sent numerous players to the college and professional ranks since taking over the program in 2002. The Gauchos had won five consecutive City titles and were heavily favored this last season until sanctions were imposed.

The program’s problems led to more than 20 Narbonne football players transferring from the school since the season ended, according to people close to the program not authorized to speak publicly. They have ended up at Mission Hills Alemany, Downey Warren, Westlake Village Oaks Christian, Inglewood and L.A. Jefferson, among other schools.

Narbonne made former assistant Joe Aguirre the interim coach in 2019. With Douglas officially leaving, Narbonne can hire a new coach that will face the challenging task of taking over a program decimated by player and coaching defections. The last time this happened to a City Section team was when Hawkins let go its coaching staff after the 2016 season and numerous players left school. The team went 0-11 and 1-9 the following two seasons.

Douglas filed a lawsuit in September against the LAUSD and three individuals, alleging the district brought “false and unsubstantial” proceedings against him, destroying his reputation and causing him “severe emotional distress.” The LAUSD said in a statement, “Following the filing of a dismissal, Mr. Douglas’ lawsuit will be dismissed with prejudice.”

Lawyers for Douglas and LASUD had been negotiating for weeks.