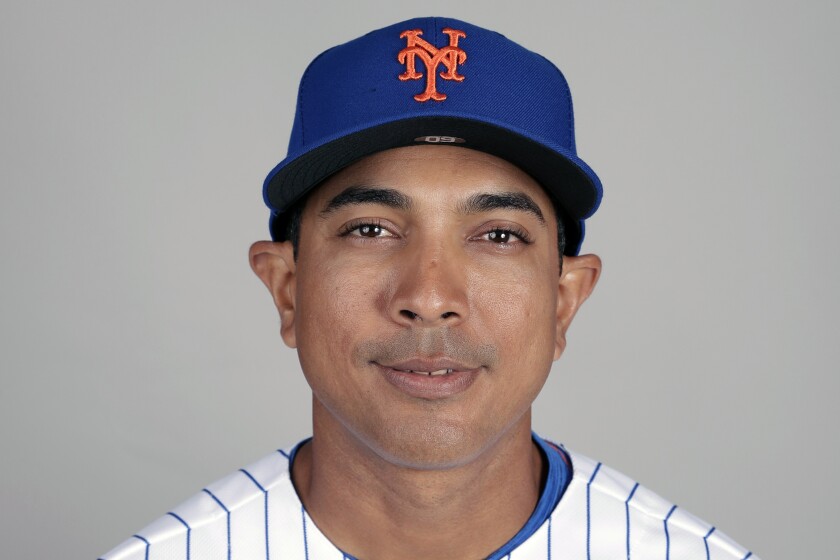 The Mets made it official, hiring Luis Rojas as their manager to replace Carlos Beltrán.

New York announced the move Thursday, a week after Beltrán departed without managing a game. Rojas, who had been the Mets quality control coach, was given a multiyear contract.

“I will work tirelessly to help this team win,” Rojas said in a statement. “I believe this team and coaching staff can do special things, and I look forward to working together with everyone to reach our goals.”

Rojas became New York’s fourth manager in the past 2 1/2 years — and third in four months. He is to be introduced Friday at a Citi Field news conference.

“He has a good finger on the pulse of this particular team. He was part of it last year,” general manager Brodie Van Wagenen said Wednesday. “He knows these guys, and he knows how to communicate to them. Every returning player on the roster has a relationship with him, and that’s valuable to us at this time.”

Beltrán was let go last week as part of the fallout from the Houston Astros’ sign-stealing scandal.

The 38-year-old Rojas is the son of former Montreal Expos and San Francisco Giants manager Felipe Alou and the brother of ex-big league outfielder Moises Alou, who spent his last two seasons with the Mets from 2007-08.

“Luis has grown up with baseball in his blood, as his family is part of baseball royalty,” Mets chief operating officer Jeff Wilpon said in a statement.

A minor league manager for eight years, Rojas has worked in the organization since 2007 but had never coached in the majors before joining Mickey Callaway’s staff last season.

“Luis earned this job. He has literally trained his whole life to be a manager,” Van Wagenen said. “He is considered one of the better in-game decision makers simply that we have in the organization.”

Rojas’ duties in the dugout as quality control coach included serving as “a conduit between the front office and coaching staff on all issues including game preparation, strategy and analytics,” according to the team’s media guide. He also was New York’s outfield coach in 2019 and led the effort in preparing hitters for opposing pitchers, Van Wagenen said.

Callaway was fired after the season, and Rojas interviewed for the vacancy before New York hired Beltrán on Nov. 1. Van Wagenen said Rojas knew he was “a serious candidate” back in October.

“It’s always helpful to have familiarity,” Van Wagenen said. “The fact that he was so actively involved with the coaches this fall in preparation for spring training, in preparation for the season — he was already asserting himself more in a leadership role with this new coaching staff and helping Carlos learn some of the managerial things that he hadn’t been exposed to before.”

That played “a significant role” in the Mets choosing Rojas, according to Van Wagenen. The team decided against external options such as ESPN analyst Eduardo Pérez, who interviewed for the job last fall.

“I think it’s the fit, it’s where the team is, it’s what culture we’re trying to create,” Van Wagenen said, pointing out that most of New York’s homegrown talent played for Rojas in the minors. “He’s respected by the players, he’s trusted by the players and he’s someone that we have great confidence in.”

Beltrán’s tenure lasted just 2½ months and ended after Commissioner Rob Manfred singled him out last week in a report on a cheating scheme used by the Astros during their World Series championship season in 2017, when Beltrán played for them.

No players were disciplined by Major League Baseball, but three days later the Mets announced Beltrán was out as manager. The sides said it was a mutual decision, and Beltrán apologized for his role in the scam. He said he didn’t want to be a distraction to the Mets.

Less than a week afterward, they transitioned to Rojas.

“When it came to this unfortunate circumstance, we didn’t want to change the values that we outlined for ourselves in the initial process,” Van Wagenen said. “We wanted to continue the momentum that we have with the work that’s been done in preparation for spring training, and we felt like Luis was in a position to be a leader of that group.”

Houston manager AJ Hinch and Boston skipper Alex Cora also were let go after being implicated in MLB’s sign-stealing report. Neither the Astros nor Red Sox have named replacements.

Rojas, born in the Dominican Republic, played in the minors with the Orioles, Marlins and Expos/Nationals from 2000-05 but never got above rookie ball.

He is entering his 14th season working in the Mets organization, including those eight as a minor league manager. He coached for New York in the Dominican Summer League in 2007, got his first managerial role with the rookie-level Gulf Coast League team in 2011 and also managed at Class A and Double-A. In the Dominican Winter League, he won a 2016 championship with the Leones del Escogido.

Notably, he was the manager at Double-A Binghamton during Pete Alonso’s breakout 2018 season, when he led the minors with 36 home runs.

“Loved having Luis in ‘17 and ’18 as my AA manager!” Alonso tweeted. “It’s awesome playing under him and having him on staff last year as well!!! Super pumped to have him as the Jeffe. Also he throws some damn good bp.”