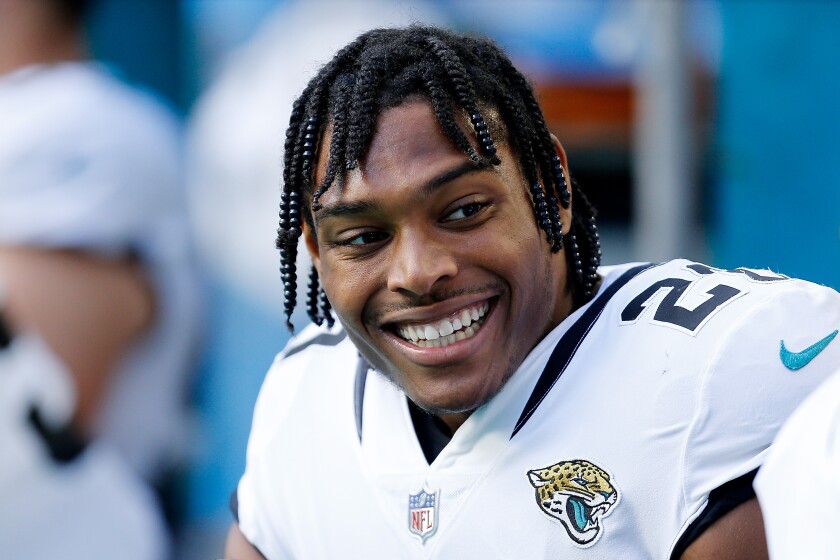 New cornerback Jalen Ramsey acclimating to Rams, could play against the Falcons

All eyes were on Jalen Ramsey as the star cornerback went through his first workout with the Rams on Thursday.

The two-time Pro Bowl selection, acquired from the Jacksonville Jaguars in a blockbuster trade Tuesday, made an immediate impression with teammates on the field, in the meeting room and in the locker room.

“He’s polished, he’s hungry, he wants to be great and he’s built for it,” slot cornerback Nickell Robey-Coleman said. “You can feel it. You can see it. Ain’t no façade to it.”

Ramsey, 24, has not played since the third week of the season because of back soreness and other issues. So Thursday was an opportunity to re-acclimate to a full practice while learning a new system.

“Getting in the groove, but I feel like it went well overall,” he said of the workout.

The Rams, mired in a three-game losing streak, play the Atlanta Falcons on Sunday at Mercedes-Benz Stadium. Neither Ramsey nor coach Sean McVay would say definitively that Ramsey will play against a Falcons offense that began the week ranked second in the NFL in passing.

McVay said after an early-afternoon walk-through that Ramsey was intelligent, charismatic and confident. The practice, he said, would be a “big gauge” in helping to determine whether Ramsey would play against a Falcons.

“Really more than anything for him to push himself physically and communicate how he’s feeling,” McVay said. “We’ll do what’s best for Jalen. What’s best for the team is to be able to have him up in some form or fashion, but those will be things I think we’ll have a better grasp on after practice [Thursday].”

Ramsey said after practice that he hoped to play.

“We got a couple more days to figure it out,” he said. “We’re going to do what’s smart for myself and the team, but I hope so. I hope I can go help and contribute to a win somehow, some way whether it’s limited or whatever.”

Ramsey joins a Rams secondary that has been reconfigured because of injuries and trades. Cornerback Aqib Talib and safety John Johnson are on injured reserve, and the Rams made room for Ramsey by trading Marcus Peters to the Baltimore Ravens.

Ramsey made an immediate impression on defensive coordinator Wade Phillips.

“He’s a real smart guy, so even in the stuff he’s done already, he’s pretty quick,” Phillips said after the walk-through. “So if he does play, I think he can play with a bigger menu than a normal guy coming into play.”

As with edge rusher Dante Fowler, a former Jaguars teammate acquired by the Rams at last season’s trade deadline, Ramsey said he regarded the 72-year-old Phillips as a legend.

“That’s what I told him when I first saw him,” Ramsey said.

Ramsey is part of a defense that also includes defensive tackle Aaron Donald, the NFL’s two-time defensive player of the year. Ramsey’s presence and coverage skills will enhance the pass rush, Donald said.

“It’s going to give us a lot of advantage as far as quarterback holding the ball, and us getting to the quarterback,” he said.

Against the Falcons, the starting secondary will include cornerback Troy Hill and safeties Eric Weddle and Marqi Christian. Cornerback Darious Williams will start opposite Hill if Ramsey does not play or is limited.

Williams was claimed off waivers from the Ravens last season. He has played on special teams this season but not on defense.

“Darious had a real good preseason,” Phillips said. “We think he has a bright future.”

The Falcons feature veteran quarterback Matt Ryan and star receiver Julio Jones. Ramsey would embrace the opportunity to match up against them.

“I love that challenge,” Ramsey said, “and if I’m able to perform well I would like to be out there.”

Running back Todd Gurley, who sat out last week’s loss to the San Francisco 49ers because of a left thigh bruise, was limited in practice but said he was “doing better” and “making progress.” Asked if he was on track to play against the Falcons, he said, “We’ll see on Sunday.” Running back Malcolm Brown (ankle) did not practice for the second day in a row and is questionable for Sunday’s game. ... The Rams will practice Friday morning and then depart for Atlanta in the afternoon. The Rams will remain in Atlanta after Sunday’s game before departing for London on Thursday. The Rams play the Cincinnati Bengals at Wembley Stadium on Oct. 27.