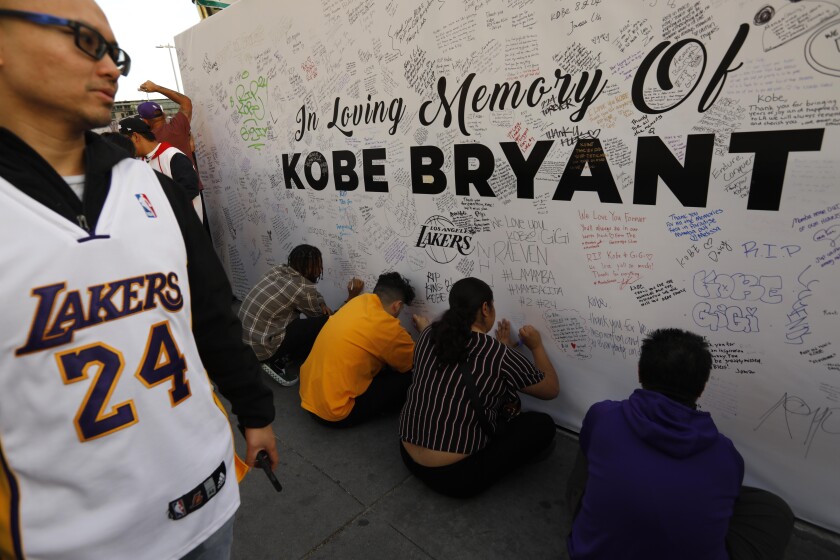 Things started to feel normal at Thursday night’s Lakers game. It was trade deadline day. Free-agent guard Darren Collison was there. The team played a competitive game against a Houston Rockets team it might see again in the playoffs. But as it is sure to be with every game this season, the memory of Kobe Bryant remained.

We haven’t had a newsletter since Bryant’s death two weeks ago when his helicopter crashed into a Calabasas hillside. He died along with eight other people. His 13-year-old daughter, Gianna, and her teammates Alyssa Altobelli and Payton Chester, also 13, were on the flight too. Alyssa’s parents, John and Keri Altobelli, were with her, as was Payton’s mother Sarah, Christina Mauser, who coached with Bryant, and Ara Zobayan, the pilot.

It was Bryant’s version of a carpool from Orange County to Thousand Oaks, where they had a basketball game later that day.

Bryant’s death shook the NBA world because of its suddenness, because of what he meant to so many players and coaches around the league, and because to many of them he seemed invincible.

His death shook the city and fans everywhere because of how connected people felt to him.

There were personal connections of different kinds throughout the Lakers’ locker room.

LeBron James had passed Bryant on the all-time scoring list the night before his death. Bryant called him after the game to congratulate him. James grew up idolizing Bryant, but Bryant wasn’t much for mentoring young players while he was playing. Only in the late stages of his career and after he retired did he open himself up to many of the players who wanted his advice. In the last few years, James had started to have the kind of relationship with Bryant that he’d always wanted.

Anthony Davis was one of the few young players Bryant mentored, drawn to Davis’ attitude and hunger for learning as a 19-year-old on the U.S. Olympic team in 2012. Davis smiled after last Friday’s game as he recalled a story from that summer when Bryant chided him for a uniform mixup.

Byrant’s death made Quinn Cook think about his father, who was a big Lakers fan but died when Cook was 14.

Dwight Howard seemed to take it harder than many.

“It wasn’t because we were close, close friends, it’s just like, man, I just never thought that it’d be Kobe,” Howard said. “… I just never thought that somebody like that would be gone. And it’s something that, you know, I just tell people, if you have any bitterness or anger, whatever, strife towards anybody, let it go. Let them know how you feel. Get those feelings out.”

It took Howard about a week and a half to feel ready emotionally to address reporters. When he did, it was clear he still was working through his feelings. He felt like he and Bryant finally had been able to understand each other better. He’d spent all season trying to show Bryant that he had grown from the one season they played together and was committed to doing whatever it took to help the Lakers win a championship. He mentioned a few times after Tuesday’s game that he’d started to wear Bryant’s shoes this season.

I’ve been asked a few times why this would be harder for the Lakers than for any other team. The above notes tell part of the story. But there is also this: They are now part of the tribute. This will be a yearlong memorial for Bryant, which started with a beautifully orchestrated series of tributes last Friday when they played their first game at Staples Center since Bryant’s death. They’ll see tribute videos at other arenas. They’ll hear fans chanting “Ko-be.”

The Lakers say they are both ready for this and welcome it. But that doesn’t mean it won’t be hard.