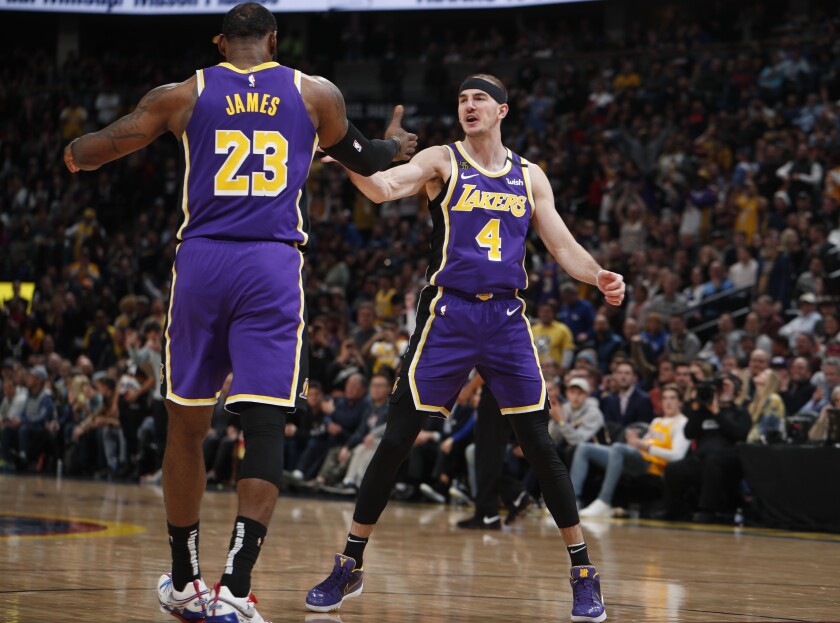 Newsletter: Lakers like where they are heading at the All-Star break

The All-Star break is here, and the Lakers like where they’re sitting.

That’s because Wednesday’s game in Denver wasn’t just one of 82. The Lakers had a series of goals.

By virtue of an overtime win in Denver, the Lakers did all three.

LeBron James was asked postgame how he judges where the team is right now.

“We are where we need to be,” James said. “We’ll come back off the break and get ready for the final stretch of the regular season. You don’t put too much into it. You understand you played some good basketball along the way, played some not good basketball. But you want to continue to get better and continue to trust the process.”

James won’t get much of a break since he’ll be playing in the All-Star game on Sunday in Chicago. But because of how good he feels about how things are going right now, he doesn’t really want one.

“I’m very excited for my teammates to be able to get some rest, decompress and get away from the game and come back fresh,” James said. “And myself will be locked in for them no matter how much rest I can get. It doesn’t matter.”

Once they’re back from the break, they’ll face a sprint to the finish.

We’ll recap all that happened this week, but first …

Lakers coach Frank Vogel smiled coyly when he said it, and he liked the line enough that he repeated it during his postgame news conference on Wednesday.

“Alex is our secret weapon.”

That, of course, is a reference to Caruso, the guard who didn’t get much playing time against the Phoenix Suns on Monday but played an important role in Wednesday’s win over the Nuggets. Caruso played 22½ minutes and had a plus-minus rating of plus-23. He and Dwight Howard were the catalysts for the Lakers’ second-quarter run that helped them dig out of a double-digit hole.

On Monday he lost playing time to Rajon Rondo, who had his best game of the season. Caruso’s role isn’t consistent, but that’s something he’s able to handle.

“I did it for the last two years — two-way contract, that’s what I did,” Caruso said. “They brought me up, I didn’t know when I was going to play, if I was going to play. It was just about being ready.… I’ve been preparing for this the last couple years.”

Vogel has teased a few times that he has thought about increasing Caruso’s role. He was asked about that Wednesday night too.

“There’s a possibility for it expanding,” Vogel said. “Right now, he’s my secret weapon. I break him out when I need him, he’s certainly earned a rotational spot, he’s in the rotation and like I said, when we need him to grow into a bigger role, he delivers.”