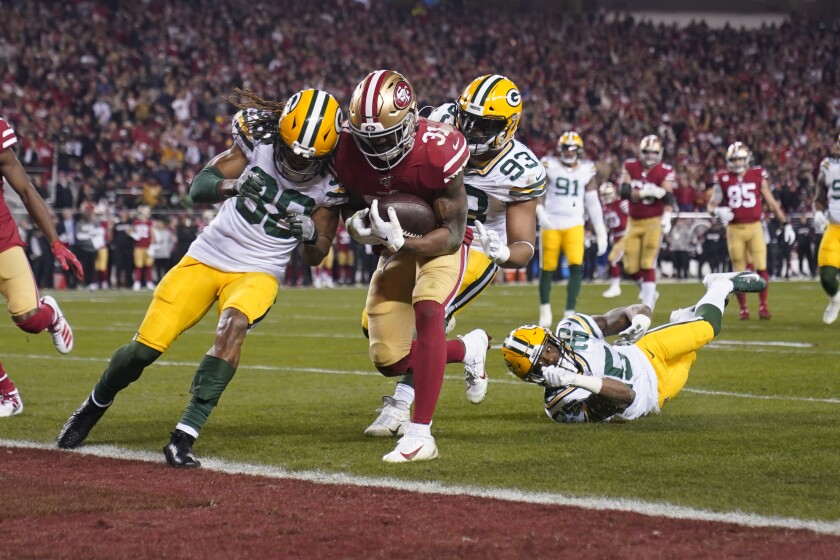 Newsletter: The Sports Report: The Super Bowl is set

Behind a little-known and often-doubted running back named Raheem Mostert, the San Francisco 49ers overwhelmed the Green Bay Packers in the manner that a steamroller would overwhelm a stuffed animal.

Mostert became the first player in NFL history to rush for at least 200 yards and four touchdowns in a postseason game in a 37-20 San Francisco victory at rocking Levi’s Stadium.

His 29-carry, 220-yard effort helped the 49ers win with a markedly lopsided offensive attack. Of their 51 plays, 42 were runs. Jimmy Garoppolo threw only eight passes, completing six for 77 yards.

The last time a starting quarterback threw fewer passes in a postseason win was Miami’s Bob Griese in Super VIII. Griese finished six for seven in a victory over Minnesota in January 1974.

“We got in there and we were going eight, nine yards a pop,” Lynch said. “So, why not, you know? Make ’em stop you.

“That has nothing to do, I promise you, with our belief in Jimmy Garoppolo and our passing attack. It’s just, if you can run it, why throw it?”

San Francisco will make its seventh Super Bowl appearance Feb. 2 in Miami against Kansas City. The 49ers most recently played for the NFL title in 2013, losing to Baltimore.

Led by the phenomenal play of quarterback Patrick Mahomes, and a defense that hardened like ice, the Kansas City Chiefs secured their spot in Super Bowl LIV on Sunday with a 35-24 victory over the upstart Tennessee Titans in the AFC championship game at a frigid-but-rollicking Arrowhead Stadium.

The temperature at kickoff was 17 degrees, with a wind chill of 5, and the day didn’t get warmer. Still, players and their bundled-up families shrugged off the cold so they could bask in the moment, hugging, dancing amid the confetti, and cheering the end of a drought two years older than the stadium itself.

“I mean, it’s amazing. It really is,” Mahomes said. “To be here, to be a part of Chiefs Kingdom and to be able to do it here at Arrowhead, these people deserve it. And, we’re not done yet.”

The Chiefs, who lost to Green Bay in the first Super Bowl, last made an appearance on the NFL’s biggest stage with a Super Bowl IV victory over Minnesota in January 1970.

The magnitude of the moment was not lost on the 73,656 people at the game.

“This town has been hungry, thirsty, whatever you want to call it for a long time,” said punter Dustin Colquitt, who has been with the Chiefs since 2005 and is the team’s longest-tenured active player. “So it feels nice just to deliver that to them. Looking up, you could tell how excited – nobody moved, they were that excited.

“Nobody was in the aisleways. Never seen a football game like that, where nobody’s trying to get closer or do anything like that. They’re just in their seats taking in the moment. That was special.”

As the second half dragged toward its merciful finish Sunday, the question became not whether UCLA would win but whether California would score again.

The Golden Bears missed jump shots, layups and putbacks during an epic dry spell. Their one-point lead became a double-digit deficit. They went 11 minutes without a point.

By the time Cal’s Matt Bradley made a one-handed floater to end the scoreless stretch with a little under six minutes to play in Pauley Pavilion, the Bruins were well on their way to a 50-40 victory that won’t make it into any greatest-games anthology.

It was the kind of defensive slugfest that pleased coach Mick Cronin after the Bruins ended a skid at three games, even if they failed to set a record for fewest points given up on their home court.

“We had them at 37, and I was upset we gave up a three at the end,” Cronin said dryly after the Bruins gave up their fewest points in a game since holding USC to 40 in March 2012 during the Pac-12 Conference tournament. It was the fewest combined points in a UCLA victory since the Bruins defeated Washington State 50-30 in February 2006.

Naomi Osaka won the tournament’s opening match for her dad at the Australian Open. Serena Williams won hers for her daughter.

Osaka’s father, Leonard Francois, was in the crowd watching as the defending champion reeled off the last four games after dropping serve for the only time to beat Marie Bouzkova 6-2, 6-4.

Next up, Williams started her bid for a first major title as a mom when she beat 18-year-old Anastasia Potapova 6-0, 6-3. Williams has won the title seven times in Australia, and is aiming for an all-time record-equaling 24th Grand Slam singles title. She hasn’t added to her career tally since victory at the 2017 Australian Open, and then becoming Olympia’s mom. She managed to end one drought last week when she won the title in Auckland, New Zealand — her first since the Australian title three years ago.

“I hadn’t been able to win as a mom, so it was nice to finally be able to win a tournament with a 2-year-old now,” Williams said of her Auckland win. “I’ve been pretty close, but it was special for me and for her. I hope for her.”

Father-of-four Roger Federer had a routine 6-3, 6-2, 6-2 win over Steve Johnson in his first tournament of the year, saying he was content with his form after a vacation and some heavy off-season training. He’s 21-0 in first-round matches at the Australian Open, where he’s won six of his 20 major titles.

Two-time Wimbledon winner Petra Kvitova, who lost the final here last year to Osaka, advanced 6-1, 6-0 over Katerina Siniakova on Margaret Court Arena in a mid-afternoon match that continued while play was suspended because of rain on the the outside courts.

Santa Anita suffered its third horse death in three days when a freak accident occurred during morning training on Sunday.

Tikkun Olam, a 4-year-old gelding, collided with an unidentified other horse while training. The second horse appeared to be uninjured. Tikkum Olam was euthanized from undisclosed injuries.

So far, Santa Anita has had five deaths since Dec. 26, the scheduled start of the season. Because of rain, the actual start was Dec. 28. Six horses died at Santa Anita through this date last year and 30 horses died overall during the winter-spring meeting.

Just when it appeared that Andrew Landry was destined for epic failure, he somehow latched on to epic success.

With birdies on the 17th and 18th holes after throwing away a six-shot lead with six holes to play, Landry shot a stomach-churning five-under-par 67 on Sunday to win the American Express at the PGA West Stadium Course at 26 under.

Abraham Ancer came from back in the pack to shoot a course record-tying, bogey-free 63 to finish in second, at 24 under, and was within earshot of his first PGA Tour victory before Landry’s steely finish.

Duke Kahanamoku vs. Johnny Weissmuller at the 1924 Olympics. Watch it here.