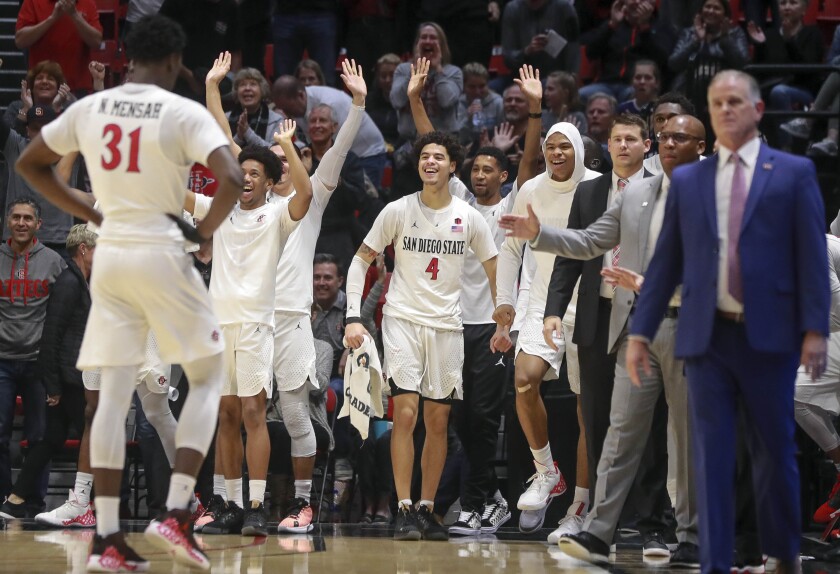 No. 7 San Diego State’s undefeated season is about more than luck

San Diego State basketball coach Brian Dutcher has been wearing his lucky dress socks for games, black with red and blue squares. In his pocket are “my lucky pennies” he picked off the ground if they were shiny and face-up.

He once had up to four, lost a couple and found some more. Into his pocket they went.

He was sticking with the same necktie, but then he opened his Christmas gifts and Angie Fisher, the wife of former boss Steve Fisher, gave him one. Appreciation trumped superstition, and he wore it against Fresno State on New Year’s Day. The Aztecs won anyway.

Dutcher’s wife, Jan, also gave him a tie for Christmas — it’s bright red — and he tempted fate again, wearing it against Utah State last Saturday in what figured to be the season’s most challenging road game, at altitude in a sold-out, hostile arena. The Aztecs won anyway.

Maybe this is about more than luck.

The Aztecs have reached the midpoint of the college basketball regular season with a 16-0 record and No. 7 ranking in the weekly Associated Press poll. Boise State is the next team to take its swing at one of two undefeated teams left out of the 353 in the NCAA’s Division I, at 7 p.m. Saturday at Viejas Arena.

“There’s a reason they’re undefeated,” Utah coach Larry Krystkowiak said after SDSU’s 80-52 win against his team that three days earlier had knocked off then-No. 6 Kentucky. “It looks every bit like an NCAA (Tournament) team to me. So it’s good times in San Diego.”

Barring a collapse of unspoken and unimaginable proportions, the Aztecs will return to the NCAA Tournament in March after a one-year hiatus. It would be the eighth trip in 11 years for a program that, as recently as two decades ago, ranked closer to the bottom 10 than top 10.

When Fisher was hired as head coach in 1999, SDSU had one winning season out of the previous 14 and had never appeared in the AP men’s basketball rankings since elevating from Div. II to Div. I in 1970.

Now? The Aztecs are ranked for the 71st different week (only 22 schools have appeared more often in the last 10 seasons). The NCAA-sponsored computer metric, called the NET, has ranked the Aztecs No. 1 for most of the past month, and they’re currently No. 3 behind college basketball blue bloods Kansas and Duke.

“I’m just trying to get to the next game,” says Dutcher, Fisher’s longtime lieutenant who replaced him in 2017. “I’m not worried about where we’re ranked. My job is to keep everybody grounded and keep them believing they’re good and work every day to get better.”

Fans, however, tend to gaze over the horizon and dream. It’s been nearly a half-century since a Div. I team finished the season without a loss, Bobby Knight’s 1975-76 Indiana Hoosiers that went 32-0 and won the NCAA championship.

Since then, four other schools have entered the NCAA Tournament undefeated. All subsequently lost.

Statistics guru Ken Pomeroy has a computer metric that predicts the result of every Div. I game, and SDSU is favored in all 13 remaining in the regular season by at least five points. Pomeroy’s computer algorithm, however, allows for upsets and forecasts the Aztecs to be 27-2 entering the Mountain West conference tournament in early March.

It gives them a 7.4-percent chance of running the table and remaining unbeaten.

Fans want to do something else: Compare this SDSU team to the one that also opened the season 16-0.

That was 2010-11, with a sophomore forward from Moreno Valley named Kawhi Leonard. That Aztecs team would get to 20-0 and a No. 4 ranking before losing at BYU in late January.

“Every team is different,” Dutcher says. “This team is forming its own identity.”

Adds junior Jordan Schakel: “We definitely look up to them and take bits and pieces from what they did. But I think we’re a completely different team. We just need to keep doing what we do, play how we play.”

The biggest difference, of course, is this team doesn’t have Leonard, who left after his sophomore year for the NBA and has evolved into one of the best players on the planet (and has two NBA Finals MVP trophies as proof). It also had two other players, Malcolm Thomas and Jamaal Franklin, who played briefly in the NBA before lucrative pro careers overseas.

That team was the culmination of several recruiting classes, with two four-year starters and several other key pieces that had been there the year (or years) before. This team has five new players, including a trio of transfers who are starting: junior Malachi Flynn from Washington State, senior KJ Feagin from Santa Clara and senior Yanni Wetzell from Vanderbilt.

Yet another difference: Leonard’s team had a softer schedule in November and December, then faced tougher competition in the Mountain West, which that season had three teams regularly ranked in the top 25. This team did the heavy lifting in the nonconference portion of the schedule, collecting quality wins against BYU, Creighton, Iowa and Utah — all away from home.

One similarity, though, is the scene inside 12,414-seat Viejas Arena. It’s full again.

Attendance dipped recently, with the end of an 80-game sellout streak and turnstile attendance falling to 6,868 per game last season. But Viejas is sold out Saturday for the third consecutive game after reaching capacity just twice in the previous 30, and general-public tickets are available for only two of the other six home dates.

“When you play a New Year’s Day game at noon and the building is full,” Dutcher says, “you know you have great fan support. ... I always say this about San Diego. USC and UCLA have great, passionate fan bases. But you go up there and they have the Lakers and the Clippers and Ducks and the Kings and the Dodgers and the Angels and the Rams and the Chargers.

“For San Diego, we are the pro basketball team: San Diego State. We get all the support and we’re very thankful for that. And it makes a difference in winning and losing.”

It was that way in 2010-11, with students camping overnight outside Viejas Arena to get tickets and creating a wall of noise next to the visitor’s bench. That team would captivate the city, finishing 34-3 with the only losses coming (twice) against a BYU team ranked in the top 10 and eventual national champion Connecticut in the Sweet 16 of the NCAA Tournament.

“You know, I see two different teams,” junior Matt Mitchell says of the inevitable comparisons. “They were a Sweet 16 team and people talk about Sweet 16, but we’re trying to get further than that. We’re trying to win a national championship.”