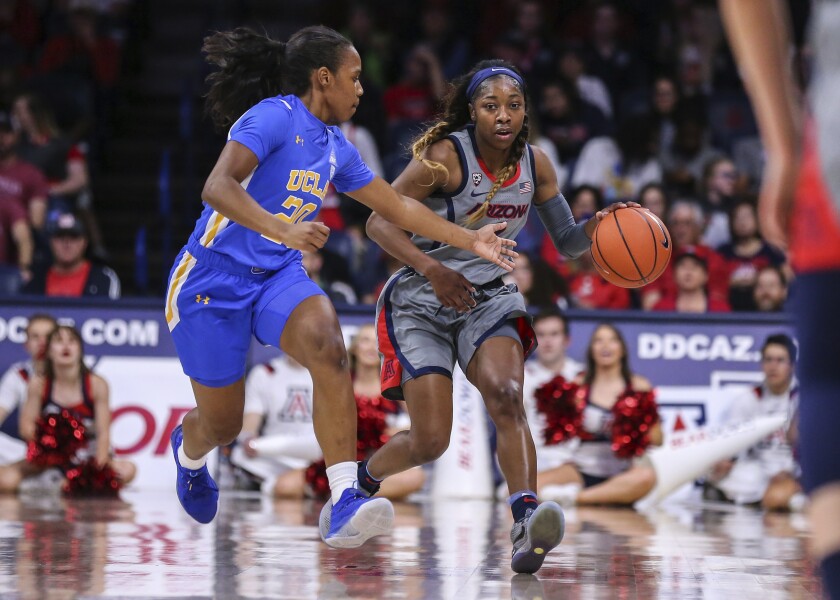 No. 8 UCLA women’s basketball team loses at No. 16 Arizona

Sam Thomas added 20 points as the Wildcats (17-3, 6-3 Pac-12 Conference) got off to a hot start, took a big lead and never allowed the Bruins back into the game.

McDonald, a junior guard from Fresno, has scored in double figures in all 57 games of her college career, the longest active streak in the nation. She has 10 20-point games this season.

The Wildcats’ 92 points were by far the most scored against the Bruins in any game this season.

Arizona hit its first seven shots, with McDonald scoring on two layups and a pair of three-pointers. The Wildcats didn’t miss until the 3:09 mark of the opening quarter.

McDonald dribbled end to end after a missed shot, scoring on a driving layup, giving Arizona a 17-6 lead with 5:22 left in the first quarter. She then hit two threes for 23-8 lead.

Arizona took a 27-16 lead into the second quarter with McDonald leading the way with 14 points.

Thomas knocked down three threes in the second quarter, and the Wildcats led by as many as 20 points despite just a pair of free throws and a layup from McDonald in the period.

The Bruins made it a 13-point game early in the third, but McDonald drove for another layup and was fouled. Her free throw gave Arizona 56-37 lead at the 7:53 mark.

UCLA went more than nine minutes without making a basket in the the third, and the Wildcats led by as many as 26 points.

McDonald received a standing ovation when she checked out of the game for good with 5:12 left to play.

The Bruins have reached the most difficult part of their Pac-12 schedule. Four of their next five opponents are ranked in the top 25, with a trip to No. 19 Arizona State on Sunday. Then they’re at No. 6 Stanford next Friday and on Feb. 14 host No. 3 Oregon. Three days after that, they host No. 10 Oregon State.

Arizona moved to 3-3 against top 25 teams and got its first win over a top 10 team this season. Oregon and Oregon State on the road remain on the schedule, along with a home game against Stanford.