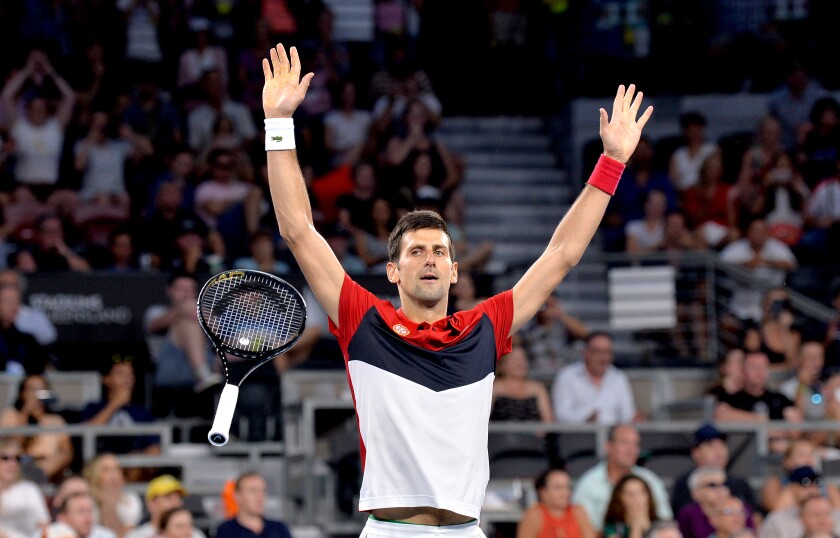 Novak Djokovic: Wildfires could cause problems for Australian Open

Novak Djokovic has voiced concerns about the impact of the devastating wildfires in Australia on tennis’ season-opening major, saying organizers may have to consider delaying the tournament if conditions around Melbourne deteriorate.

Djokovic has won a record seven Australian Open men’s championships at Melbourne Park among his 16 Grand Slam singles titles and will be among the favorites again when the tournament is scheduled to start on Monday, Jan. 20.

But with wildfires raging across large parts of the country, already leaving 23 people dead and 1,500 homes destroyed, air quality has become an issue in cities including Sydney, Melbourne and the capital, Canberra.

Djokovic opened his season with a 7-6 (5), 7-6 (6) win for Serbia over South Africa’s Kevin Anderson at the ATP Cup in Brisbane on Saturday night and said his own management team had been liaising with Tennis Australia about the impact of the wildfires, particularly in Sydney — where the ATP Cup group stage is underway and where the playoffs and final will be held next week — and in Melbourne.

Djokovic said it was reasonable to consider delaying the start of the tournament because of the extreme conditions “but I think that’s probably the very, very last option for anything.

“I think they’re going to try to do anything to not delay anything in terms of days and when it starts,“ he told a news conference. “But if it comes down to those conditions affecting the health of players, I think we should definitely consider it.”

“I think they will, if it continues same way and if the quality of air is affected in Melbourne or Sydney, I think Tennis Australia probably will be forced to create some rules about it,“ he said. “It’s tough for them because scheduling has to be respected in terms of play and the Australian Open starts at a certain time, so there’s a lot of different things involved. But health concern is a health concern for me and for anybody.”

Djokovic said the players’ council for the men’s tour “would discuss it for sure” if conditions get worse, adding that players had in the past dealt with poor air quality at some tournaments in China and elsewhere, “but this is something different.”

“So I really never had this kind of experience before,” he said. “I hope that it’s going to dissipate, that this is something that is very temporary.”

The ATP Cup is also a concern in Sydney.

Anderson, a former No. 5-ranked player who lost the Wimbledon final to Djokovic in 2018 and is coming off a prolonged injury layoff, said players had previously discussed setting safety guidelines regarding air quality but no limits had been decided.

“Obviously first and foremost it’s been so sad to see everything that’s been going on just being here you realize just the extent of what’s going on,” he said. “Obviously, sort of distant second is us and our air quality and being able to perform.

“But obviously it is hazardous. I think that’s one of the concerns in some of the Asian weeks that we play in and that’s something that we have spoken about on the council. At what point does it become unhealthy I mean hopefully it won’t be an issue, but if it is I think definitely need to have that conversation about if it’s dangerous to be out there.”

Tennis players, other athletes and celebrities are among thousands of people already pledging money to help with the bushfire recovery, with Australian Nick Kyrgios donating 200 Australian dollars for every ace he hits this month.

The path of destruction widened in at least three states Saturday amid strong winds and high temperatures in what is already being described as the worst bushfire season in Australian history.

Prime Minister Scott Morrison announced 3,000 army reservists had been called up to battle the escalating fires in support of the thousands of firefighters already working on the ground.

The fire danger increased as temperatures rose Saturday to record levels across Australia, surpassing 43 degrees Celsius (109 Fahrenheit) in Canberra and reaching a record-high 48.9 C (120 F) in Penrith, in Sydney’s western suburbs. Group games in the ATP Cup were held nearby, at the site of Sydney’s 2000 Olympic venue, and players were struggling in the conditions.

The wildfires have already burned about 5 million hectares (12.35 million acres) of land since September.

The group stage of the 24-team ATP Cup is being staged in Sydney, Brisbane and Perth. Brisbane, in Queensland state, for now is relatively clear of smoke after destructive wildfires late in 2019 but there are fires causing destruction to the north, south and west of Sydney.