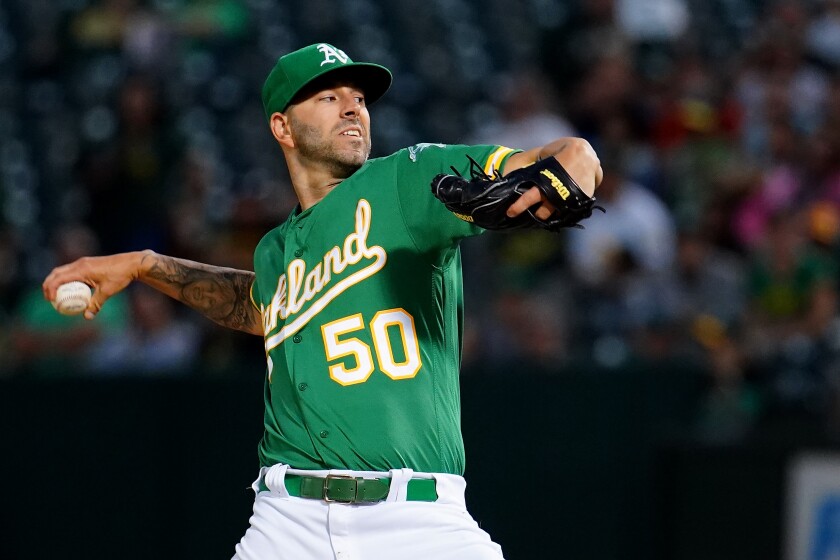 Oakland Athletics pitcher Mike Fiers didn’t have any more to say regarding his role as a whistleblower.

Fiers declined Friday to answer questions about revealing the sign-stealing scam that has engulfed Major League Baseball, instead saying he simply wanted to focus on the future. He spoke a day ahead of an A’s fan event, his first public appearance since divulging the Houston Astros used electronics to illicitly steal signs from opposing catchers in 2017.

Fiers said he would take “baseball questions.“ As for the cheating scam and its aftermath, “I’m not talking about that right now,“ he said.

“We’re moving forward,“ he reiterated several times without saying whether he expected to face scrutiny with his decision to disclose the Astros’ cheating.

Fiers told the Athletic in a story published in November that his former club had used a camera in center field to steal signs on the way to winning the 2017 World Series championship. The Astros beat the Dodgers in seven games in the World Series.

His manager and teammates in Oakland were quick to applaud him for what he did.

“A lot was reported to the league, but it’s tough to get something done unless a player that was there comes out and says something. It wasn’t going to go down any other way,“ A’s manager Bob Melvin said. “And this is significant enough that it needed to be addressed. And as time goes on, he’ll be revered for doing this, for making the game a better place.“

“You’re seeing more sentiment come his way right now, as it should, because there’s no place for this in baseball. This crosses a serious line. It needed to happen and MLB did what they should have done with it. And hopefully we’re past this because it’s an ugly black mark on the game,“ he said.

Fiers’ disclosure of Houston’s elaborate scheme led to the season-long suspensions by MLB and ensuing firings of Astros general manager Jeff Luhnow and manager AJ Hinch. Alex Cora was dismissed by the Boston Red Sox after Commissioner Rob Manfred identified him as “an active participant” in the cheating scandal as then-Astros bench coach. Cora led Boston to a title the following year, in 2018.

The Mets also cut ties with manager Carlos Beltran, who played for the Astros in 2017. Hired this offseason, Beltran was let go before ever managing a game for New York.

That means Fiers took out three managers — 10% of the majors — with one set of comments.

“There’s a lot that goes into that decision, it’s not just a purely spiteful or anything like that about making someone else pay,” Oakland closer Liam Hendriks said. “It was about saving people’s careers. It was about rectifying for those people whose careers that have been lost because of something like this.”

“But it shows a lot of courage to be able to come up and say what he said knowing the backlash, knowing the repercussions of his actions. Talking to him, he is completely sound of mind with his decision, he is happy with the decision, and regardless of how certain people have been viewing him and been talking about him, he is happy with what’s come from it,” he said.

Fiers pitched the most innings for the Astros in 2017 but was left off the postseason roster after compiling a 5.22 ERA. He signed with Detroit as a free agent in the offseason.

He is back in the American League West and set to begin the second season of a two-year contract worth more than $14 million that he signed with Oakland in December 2018. The deal pays him $8.1 million this season.

The small-budget A’s finished second in the division to Houston each of the past two seasons, winning 97 games in consecutive years.

“Clearly, MLB’s drawing the line,” A’s general manager David Forst said, noting he doesn’t wonder where Oakland might have been in the standings were it not for Houston’s scam. “I don’t think about it that way. It’s not for us to look back and say `what if?’ ”

Houston, which won a major league-best 107 games last year, plays its first regular-season road series at the Oakland Coliseum beginning March 30. Fiers won’t have to bat against Houston, and it’s unclear what kind of response he will receive around the majors.

When asked whether he would handle the situation the same way again, Fiers again turned toward baseball.

“I just want to focus on this team and not the past,” he said.

White Sox left-hander Dallas Keuchel on Friday became the first member of the 2017 Astros to publicly apologize for the team’s sign-stealing scheme.

Keuchel was at a Chicago fan event and was asked about Fiers. Keuchel called it a “tough subject” because players rarely tell secrets outside the locker room.

“It sucks to the extent of the clubhouse rule was broken and that’s where I’ll go with that,” Keuchel said. “I don’t really have much else to say about Mike.”

Fiers has been one of the steadiest starters for the A’s, pitching his second career no-hitter May 7 against the Reds and finishing the year a career-best 15-4 with a 3.90 ERA over 33 starts and his most innings yet at 184 2/3.

“There’s a lot of people I don’t think would have had the courage to come out and say it until they maybe have been retired,” Hendriks said. “My hat’s off to him, he stood up tall and put the name behind the investigation that started this whole thing. We’re happy the game’s being cleaned up, and Mike Fiers is a big part of that.”