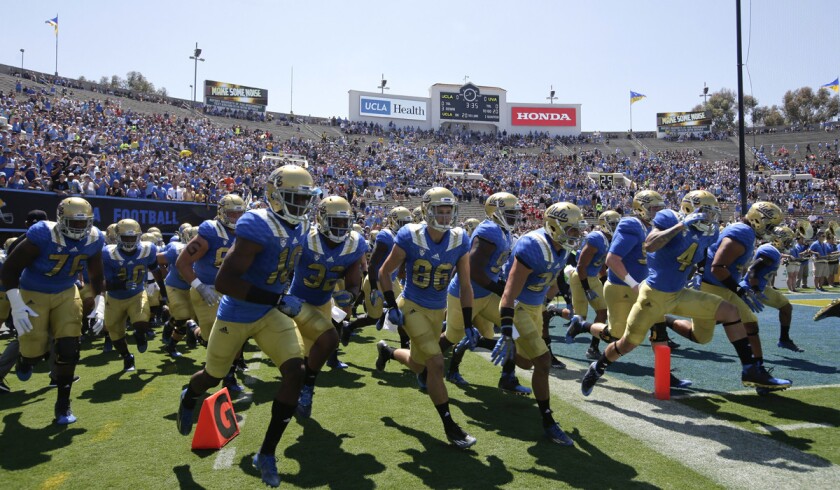 Calling it “a personal decision,” UCLA sophomore offensive lineman Christaphany Murray on Thursday became the 11th Bruin to enter the transfer portal when he announced his plans to leave the team on Twitter.

“This was what I prayed about and talked with my family and I talked to God a lot and between me and Him, I just prayed a lot and I had this in my gut, “ Murray said later in a telephone interview, “so I just had to kind of go with my gut on this one.”

God’s Plan Not Mine 🤞🏾 pic.twitter.com/0aTNbDlVVj

Murray becomes the second UCLA starter to enter the transfer portal, joining receiver Theo Howard. Howard announced this week that he was headed to Oklahoma as a graduate transfer. Murray said he was unsure where he was headed; he will likely have to sit out next season as a redshirt unless he can obtain a waiver from the NCAA for immediate eligibility.

Murray said he had a great relationship with UCLA coach Chip Kelly and offensive coordinator-offensive line coach Justin Frye, who helped him “grow up a lot as a man,” and acknowledged some sadness with his decision to leave.

“That’s my first family,” Murray said of the teammates and coaches he’s leaving behind. “I made connections there I’m going to have for a lifetime, players that I played with. When you play on a football field, there’s no way that you’re not connected for life. The time we put in together and the time we invested in each other, I’ve got connection with my teammates forever.”

Murray started all 24 games of his UCLA career and had been a mainstay since his college debut, when he became the first true freshman to start a season opener at center for the Bruins since at least 1982, when records started being kept. He manned the position for the first three games that season because of a suspension to teammate Boss Tagaloa before transitioning to guard upon Tagaloa’s return. Murray earned Freshman All-America honors from ESPN.com and 247Sports.

The 6-foot-2, 298-pound Murray was part of an offensive line that helped running back Joshua Kelley rush for 1,000 yards in consecutive seasons. The Bruins also topped 200 yards rushing in five games this season for the first time since 1978.

UCLA’s offensive line was expected to be an area of stability and one of the team’s strengths heading into 2020 before Murray’s departure. The line was set to return four of five starters, with only Tagaloa leaving, prior to Murray’s announcement.

Now the line will need to replace two starters, with the candidates including Alec Anderson, Jon Gaines II, Sam Marrazzo and Siale Liku.

Murray’s departure also magnifies the team’s lackluster recruiting efforts along the offensive line. The Bruins have signed just two offensive linemen in their current class, Bruno Fina and Patrick Selna, and they are listed at 240 and 255 pounds, respectively, meaning they could require significant physical development before being ready to play at the college level.