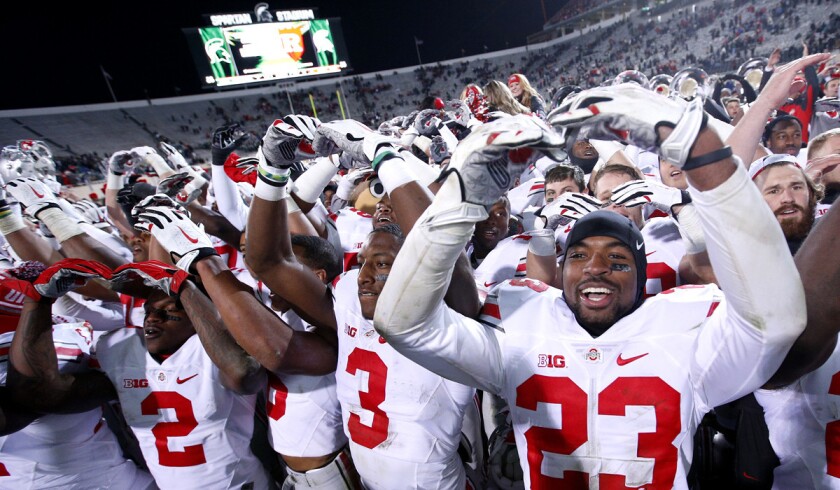 Oh no: A New York-based sports network has turned to the federal courts in its trademark dispute with Ohio State University over use of the letter “O.”

Overtime Sports Inc., an online network focusing on high school basketball and football, has a capital O with sloping corners as its logo. Its application to trademark the logo is pending with the United States Patent and Trademark Office.

Ohio State asked the company in July to stop using of the logo, saying it was too close to its own trademarked octagonal “block O” letter.

“While Ohio State recognizes there are many legitimate, non-confusing uses of the letter `O’, there can be no doubt that when the vast majority of people see a Block `O’ they associate it with Ohio State and its Block O Marks,” Samantha Quimby, an attorney retained by Ohio State to argue its case, wrote in a July 19 letter to Overtime Sports. The university has used the block 0 since at least 1898, the letter said.

Overtime Sports disagrees with Ohio State’s position and on Monday filed a federal lawsuit in New York City asking that the university be prohibited from trying to stop the use of the logo.

The lawsuit notes that Ohio State’s “O” contains neither rounded edges nor a rectangle in the center, as the company’s logo does. It also argued there’s no danger of someone confusing the letters, and that Overtime Sports has not unfairly competed with Ohio State or violated any of its rights.

Ohio State declined to comment on the lawsuit itself.

“Like other many other universities, Ohio State works to protect the university’s brand and trademarks because these assets hold significant value, which benefits our students and faculty and the broader community by supporting teaching, research and service,” university spokesman Chris Davey said in an email.

Revenue from licensing royalties was $15.5 million last year and $207 million since the licensing program began in 1980, Davey said.

The university — like many others — zealously protects its brand, trademarking the names of both legendary coach Woody Hayes and former coach Urban Meyer, for example.

Other trademark attempts didn’t go so well. In September, the U.S. Patent and Trademark Office turned down Ohio State’s request to trademark “The“ when used as part of the school’s name on university merchandise.

The patent office said the trademark appears to be used for “merely decorative manner“ and as an “ornamental feature“ that doesn’t appear to function as a trademark that would differentiate the items from others.

In a separate dispute with the federal Patent and Trademark Office, Ohio State has argued against the University of Oklahoma’s use of the letter O.