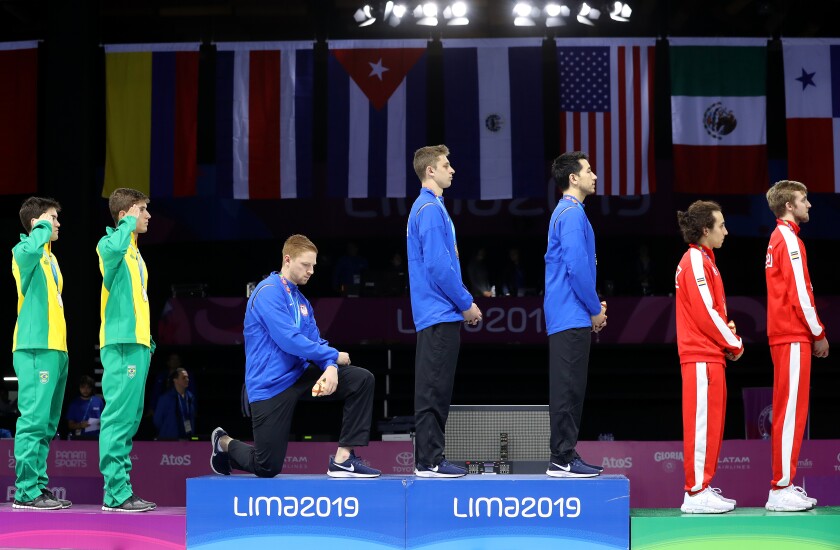 Athletes looking to express their political or social views at the upcoming 2020 Olympic Games in Tokyo will have to deal with a new set of guidelines covering what is — and is not — allowed.

The “no-no” list includes any signs, armbands and hand gestures. It prohibits taking a knee or otherwise failing to adhere to strict protocol during the medal ceremony.

The International Olympic Committee issued the three-page update relating to its Rule 50 during a meeting between the executive board and the athletes’ commission in Lausanne, Switzerland, on Thursday.

“Although Rule 50 of the Olympic Charter has been providing a framework to protect the neutrality of sport and the Olympic Games for many years,” the IOC stated, “it was felt that there was a need to provide clear guidelines to athletes as to when and where they could express their views during the Games.”

The clarification drew immediate pushback from the sports world, with critics noting that it would have outlawed an iconic moment at the 1968 Mexico City Games when American sprinters John Carlos and Tommie Smith raised their fists on the podium.

“Let’s be clear, the Olympic movement has already politicized sport,” said Global Athlete, a grass-roots movement started by Olympians. It added that “freedom of expression is a fundamental human right and sport rules should not have the ability to limit that right.”

At the 2019 swimming world championships, competitors from Britain and Australia refused to take the podium with gold medalist Sun Yang of China, who faced doping allegations.

In the marathon at the 2016 Summer Games in Rio de Janeiro, silver medalist Feyisa Lilesa of Ethiopia crossed his arms at the finish line to show support for protesters in his home country.

The selected athletes who comprise the IOC athletes commission said they needed to enforce limits on such demonstrations.

“If we do not, the life’s work of the athletes around us could be tarnished, and the world would quickly no longer be able to look at us competing and living respectfully together, as conflicts drive a wedge between individuals, groups and nations,” the commission stated.

Jules Boykoff, a professor who studies the Olympic movement at Pacific University in Oregon, pointed out that Olympic leaders have a history of awarding the Games to cities in authoritarian countries accused of human-rights violations.

“The bottom line is, the International Olympic Committee specializes in selective ethics,” he said. “This is the next chapter in that.”