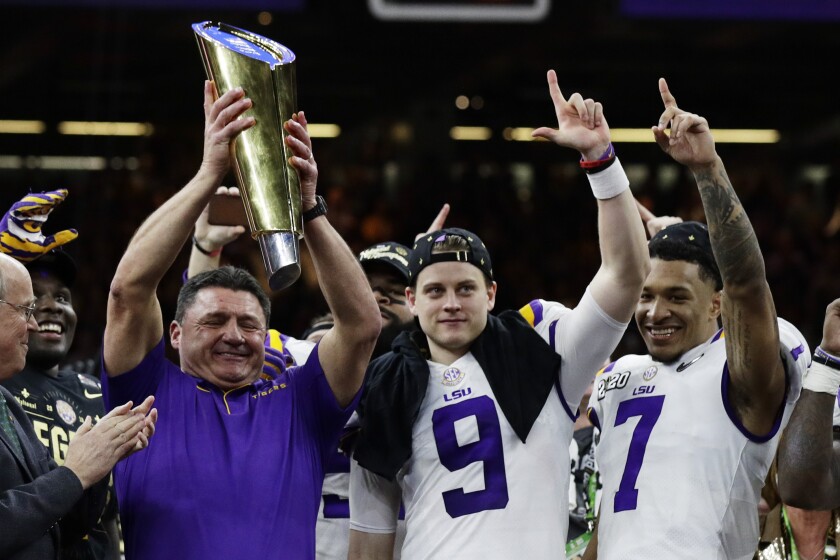 On College Football: Can anyone replicate LSU’s run in 2020?

Nick Saban looked miserable on the Superdome sideline after smiling through a pregame national TV appearance that kept his Alabama program front and center even as the Crimson Tide spent their New Year’s Day in Central Florida.

After watching Alabama and Clemson split the last four College Football Playoff titles and compete against each other in three of the last four championship bouts, a nation of passionate observers began the season with a simple request — could someone, anyone, please beat these guys?

LSU began the season ranked No. 6 with a returning starter at quarterback who completed 58% of his passes and threw just 16 touchdowns. Joe Burrow was an afterthought, but everybody knew that Orgeron had recruited talent up and down the roster, so the preseason billing felt about right.

Those who were paying attention in Baton Rouge could see what the hire of Joe Brady to coordinate LSU’s passing game was going to do to unlock Burrow’s potential, but not even the most purple-and-gold-tinted glasses could have predicted that this was the team that was going to humble the sport’s superpowers.

On the one hand, LSU’s thrill ride to the top should give hope to a number of traditional powers across the nation that feel stuck in their place in the pecking order. On the other hand, the fact that it took one of the best seasons for a team and a quarterback in college football history — plus a home-field advantage in the championship game — to unseat Alabama and Clemson could make on-the-cusp programs feel slightly discouraged.

If there’s one thing everyone has learned from LSU’s mentality under Orgeron, it’s that all teams who consider themselves national contenders should shut their mouths and get to work starting … right now.

College football’s confetti season is over, and Swinney didn’t waste any time moving his focus forward. After a Trevor Lawrence fumble put to rest any chance of a Clemson comeback, Swinney found his sophomore quarterback, who lost for the first time as a college player, and began to build him back up.

“I told him I loved him and that, hey, listen, this is a great opportunity to lead and to respond,” Swinney said.

Lawrence put the loss on his shoulders, saying it wasn’t his night and that he was not accurate enough. He knew he had been outclassed by Burrow, who won the Heisman Trophy for a reason. He was a cut above all season.

Lawrence will return for his junior year with all the motivation needed to reach a new level. That, plus Clemson having 80 freshmen and sophomores on this year’s team, is why the Tigers have already been named the favorites to win the 2020 title.

Alabama, even without Tua Tagovailoa, is rightfully at No. 2. The Crimson Tide will surround whoever wins the quarterback job — Mac Jones, freshman Bryce Young of Santa Ana Mater Dei High or Tagovailoa’s little brother, Taulia — with sublime skill-position talent in receivers Devonta Smith and Jaylen Waddle.

So, Clemson and Alabama will be targets again. Thanks to LSU, the rest of the nation can more realistically say: So what?

LSU and Ohio State, which was a few plays away against Clemson from taking on LSU on Monday night and returns star quarterback Justin Fields, should be major factors again.

For LSU, there is no replacing Burrow, but that effort and how close it can get will decide everything. Myles Brennan is the assumed successor, but he’s an unknown.

It’s possible LSU will look for another graduate transfer. Houston’s D’Eriq King just hit the transfer portal, and Stanford’s K.J. Costello, the Santa Margarita High product, is also looking for a new home. The Tigers will now also have to look for a replacement for Brady, who accepted the Carolina Panthers offensive coordinator position Tuesday, according to reports.

Using LSU’s formula — an elite quarterback with room to grow plus a scheme change plus a cultural foundation — which teams could put together a special season from outside the top five?

In 2019, Ed Orgeron showed just how important that is.

“The leadership, the character, the grit,” Orgeron said. “They believed in our coaching staff. They believed in the work ethic. We started last Jan. 17th. We were working for a year. A lot of things had to fall into place.”